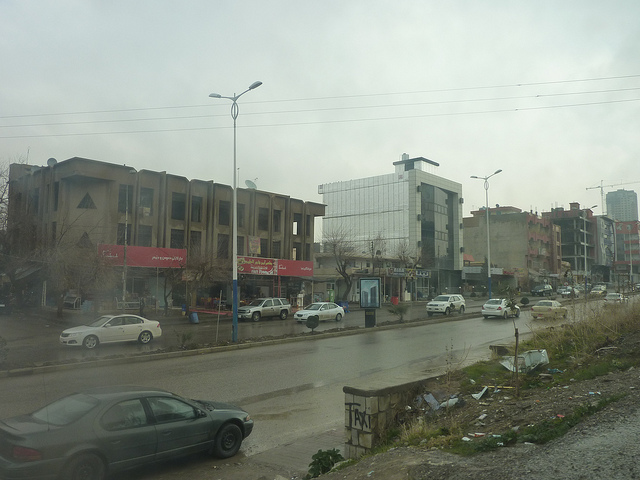 It’s very ironic that all the noise about the Kurdish independence referendum; the battles between Kurdish and Iraqi forces; Turkish, Syrian, and Iranian opposition to Kurdish independence; discussion in Israel whether the State of Israel should recognize Kurdish independence; is taking place within a few weeks before and just after the 16th Yahrtzeit – anniversary of the murder – of former Israeli Tourism Minister and Moledet Party founder Rechavam Ze’evi by PFLP terrorists in 2001.

The Kurdish connection to Israel

It’s no secret that close relations existed between Israel and the Kurds throughout most of the sixties and into the seventies, until the collapse of the Kurdish revolt in Iraq, in 1975. Ze’evi – as a young military officer – had been to Kurdistan in the 1960s and Iraqi Kurdish leader Mustafa Barzani had been to Israel. Reflective of this, the 1996 Moledet Party Platform, Chapter 9: Foreign Policy, paragraph 17, stated “Israel will act against the oppression of peoples like the Kurds…”

Ba’athist “forced Arabization” of minorities – Kurds, Yezidis, Assyrian Christians, Armenians, and others, in Kurdistan – northern Iraq – began in the 1960s, and lasted until the early 2000s. The Kurds, were brutally suppressed by Saddam Hussein’s Ba’athist regime, starting in the late 1970s. During the 1987-88 Al-Anfal Campaign, an estimated 180,000 Kurds were killed, hundreds of thousands more, were expelled from their traditional homeland in northern Iraq. During the campaign, over 3,000 Kurdish villages were destroyed and replaced with Arab settlers, and chemical weapons were used against them, as in the infamous 1988 Halabja Massacre, that killed as many as 5,000 and injured up to 10,000 people.

In fact, the town of Kirkuk, in the news a lot recently, was originally a Kurdish majority, multi-ethnic city. The Ba’athist Arabization program concentrated on moving Arabs to the vicinity of oil fields in Kurdistan, particularly the ones around Kirkuk. According to Human Rights Watch, from 1991 – after the Gulf War – until 2003, the Ba’athist Iraqi government, systematically expelled over 500,000 Kurds from the Kirkuk region.

Jews as role models for Kurds

The Kurds have always looked toward Israel as a role model. The Jews are the only minority in the middle east – actually the remnant of the indigenous population of the land of Israel as the Kurds are in Kurdistan – that has liberated itself politically from the 7th century Arab imperialist invasion, occupation and oppression of the region.

With this in mind, Israel should actively and openly revive the former policy of support for the Kurdish people. Israel must recognize the State of Kurdistan, as soon as they declare independence, establish diplomatic relations, exchange embassies, work in international forums and agencies to support their independence, and at the UN, to have them admitted as a member state.

In a recent article, Dr. Mordechai Kedar, of Bar-Ilan University in Israel, raises an important point. Kedar refering to, “Israeli pundits, army officers and politicians…view the current regional situation as a golden opportunity that Israel must take advantage of by accepting the Arab peace proposals, establishing a Palestinian state and embarking on a new era of cooperation with the ‘moderate Sunni axis’ in order to bring peace and security to Israel and the entire area.” He then asks, “Why? Because all these countries fear Iran as much as, and possibly more, than Israel does.”

Referring to recent, seemingly warmer relations between Israel and the Sunni Arab states in the region who feel threatened by Iran, He then asks,

But let us suppose that the Iranian threat disappears because Israel succeeds in an attack on Iranian nuclear facilities…Will the Arab and Western worlds be grateful to Israel and act to protect Israel’s interests?

What happened to the Kurds will happen to Israel. The Kurds fought ISIS, sacrificed their soldiers and people, and were thrown to the wolves once they were not needed. That is exactly what the world’s nations will do to Israel once it extricates them from the Iranian problem. Why not? The immediate interests of each and every country and not the moral rights of the Kurds and the Israelis are what makes the world go round.

No friends, but merely interests

In my recent article, “North Korea: The Israeli Connection” I made a similar point:

As the saying goes, “countries don’t have friends, just interests.” There are close parallels between the US, South Korea and Japan, vis-a-vis North Korea, and the US and Israel, vis-a-vis Iran. So Jews and Israel should be watching closely how the Trump administration “protects” its allies. One can get a picture of just how well America would cover Israel under its “security umbrella,” when pushing Israel to take a “chance for peace” as has been suggested, in any future Middle East peace deal, by watching the Korean crisis unfold. And, it will give a clue as to how much Israel can count on the US in dealing with Iran’s nuclear program.

One could now add to that, watch how the Trump administration has abandoned the Kurds.

Israel should pro-actively support the legitimate aspirations of the oppressed minorities – the indigenous peoples – of the Middle East and North Africa, like the Kurds and Berbers, and build alliances with them. It should be a corner stone of Israeli Foreign Policy.

Netanyahu speaks for the Kurds

In 2014, PM Netanyahu said that, “It is upon us to support the Kurds’ aspiration for independence,” and called them a “fighting people that have proven political commitment and political moderation, and they’re also worthy of their own political independence.”

In August of this year, Netanyahu told a visiting delegation of 33 Republican Congressmen from the US, that he was in favor of an independent state for the Kurds, “a brave, pro-Western people who share our values.”

And again, speaking at the state memorial ceremony for Ze’evi, just recently, Netanyahu said, “The Kurds demonstrate national maturity and international maturity…We have very great sympathy for their desires and the world needs to concern itself with their safety and with their future.”

Till now, Israel has been the only country to openly support Kurdish independence, with Netanyahu last month backing “the legitimate efforts of the Kurdish people to attain a state of its own.” But, he did not specify how and where such a state should come into being.

Well, now that they’ve voted for independence, you have to put your words into action! The State of Israel must recognize the State of Kurdistan as soon as they declare independence.

Popular former Likud MK Gideon Sa’ar – and a potential challenger to Netanyahu – has also urged Israel support Kurdish independence, saying in June that, “they have proven themselves over decades to be a reliable strategic partner for us.” And again, on the day of the referendum in late September, “I hope that if there is a majority for independence, Israel will be the first country to recognize Iraqi Kurdistan.”

Finally, Israeli Middle East expert Dr. Eddy Cohen – as reported in Arutz Sheva recently – said that if the Kurds are dislodged from their positions by Iran it could endanger Israel and therefore Israel has a strategic interest in helping the Kurds.

Israel has always had a strategic interest in the success of the Kurds. That’s why Israel has supported them since the 1960s, and why I’ve been calling for Israel to support Kurdish independence since the early 2000s.

How America should have handled Iraq in 2003

I think the Americans blew it in 2003, they should have carved Iraq into three areas – or states on the way – approximately, a Kurdish north, Sunni center, and Shiite south. They should have offered the Kurds independence almost immediately, they then would have had a strong regional ally and bulwark against Iran much earlier. A de-Ba’athification program for the Sunni center should have been implemented, similar to de-Nazification in Germany after WWII. The Shiite south, by having their own area, might not have become as radical as they did. Without the power struggle with the Sunnis; in the “unified” Iraq, that the Americans attempted to maintain; the Shiites might not have drawn closer to Iran, being that they were Arabs and not Persians.

The two other areas both under American military occupation, could have been offered a performance based track toward eventual independence, and seeing what the Americans did with the Kurds, would have proven the Americans trustworthy.

The Americans seem to be missing the boat of opportunity again, with regards to the Kurds. But Israel shouldn’t, it’s about time that Israel recognize an independent State of Kurdistan!