I ask again: does the Constitution mean what it says. If it does, then Obamacare is dead on arrival. The United States Constitution, Supreme Court precedent, and established case law, all say so.

Weeping is for a night, joy cometh in the morning look up

If this “act” were constitutional surely one could find a group of legal eagles (or are you all little yellow canaries) to challenge me to a debate. I promise to be gentle and not make you all look like totally inept frauds.

How Obamacare breaks the Constitution 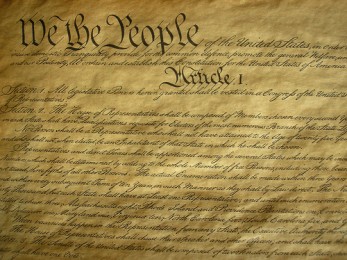 Indisputably, the First and Fourteenth Amendments are “positive law” Let’s up the ante. I say the Obamacare “Act” “H.R.3590” breaks the 1st Amendment,

Congress shall make no law respecting an establishment of religion, or the prohibiting the free exercise thereof…

and the 14th Amendment,

No State shall…deny to any person within its jurisdiction the equal protection of the laws.

Within the Obamacare “Act” H.R.3590 the ‘General Government,’ in violation of the 1st Amendment, granted religious exceptions to various religious sects. See pages 326 and 2105 citing “religious conscience exemptions” in a very specific unconstitutional way. Practitioners of the Islamic or Muslim religion and Amish religious sects are exempt from provisions that punish or tax individuals for not complying with the provision of the “Act” that mandates purchasing of health insurance. Who can dispute the 1st Amendment prohibits Congress from writing any law that gives religious organizations, preference based upon membership in religious organizations.
None can dispute that ‘preferential treatment” of any individual based upon membership in a religious sect is prohibited. The U.S. Constitution prohibits making any law that does not apply with equal force that conclusively demonstrates a the violation of the 14th Amendment’s “equal protection.”

A review of the provision set forth in the “Act” states:

(A) Religious Conscience Exemption Such a term shall not include any individual for any month if such individual has an effect an exemption under section 1311(d)(4)(H) of the ‘patient Protection and Affordable Care Act” which certifies that such individual is – (i) a member of a recognized religious sect or division thereof which is described in section 1402 (g)(1), and (ii) an adherent of established tenets or teachings of such sect or division as described in such section Also see Section 1402(g).

Another point, of contention: this above section of the “Act” describes a religious opt-out from Social security. ‘H.R. 3590” now incorporates the same exemption, and vest the Commissioner of Social Security (or the Secretary of Health and Human Services; the statute does not make clear) the authority to give exemptions to favored religious sects.

Interesting, the Department of Justice attempted to surreptitiously misled the court’s in Purpura v. Sebelius, Case # 11-7275, to justify the exemption clause in the “Act” asserting it did not violate the 1st Amendment citing Walz v Tax Comm’n of the City of New York, 397 U.S. 664, 669 (1970) by intentionally misapplying the contents therein, rightly trusting the Hoodlums in Black Robes wouldn’t bother to read the cited case, or even realize a property case does not offend the “Establishment Clause.”

Ironically, their citation solidified Purpura’s argument. In fact the religious exemptions to Muslims and Amish, etc. violate not only the 1st but also the 14th Amendment. This brings to mind a Biblical verse in Proverbs; 12:13

The wicked is snared by the transgression of his own lips; but the just shall come out of trouble.

In Walz v Tax Comm’n of the City of NY Judge Harlan made clear in his decision: neutrality in application requires an “equal protection” mode analysis. Nowhere do we find neutrality in the “Act” H.R.3590.

Two requirements requirement’s frequently articulate and applied in our case for achieving this goal are “neutrality” and “voluntarism,” e.g. see Abington School District v. Schempp, 374 U.S. 203 305 (1963) (concurring opinion of Mr. Justice Goldberg); 374 U.S. 203, 305 (1963) (concurring Justice Goldberg): Engel v Vitale, 370 U.S. 421 (1962).”… Government must neither legislate to accord benefits that favor religion over non-religion, nor sponsor a particular sect, nor try to encourage participation in or abnegation of religion. Mr. Justice Goldberg’s concurring opinion in (p695) Abington which I joined, set forth these principles:

The fullest realization of true religious liberty requires that the government neither engage in nor compel religious practices, that it affects no favoritism among sects or between religious and non-religious beliefs. [My emphasis]

Any law must apply with equal force to everyone. “H.R. 3590” abridges every individual not affiliated with an Islamic or Amish sect.’ this is a direct violation of the 1st and 14th Amendments. It is inarguable “H.R. 3590” favors and respects one religion over another failing to prescribe a stand for such privileged exemptions [Muslims and Amish]. It is also, important to note, if one is not a member of the favored religion that individual is subject to a penalty for failure to comply as so outlined in the provision of the “Act” is without “due process” 5th Amendment violation or any appeal process; clearly an overextension of any clause set forth in the Constitution.

The blatant violation of the 14th Amendment is glaring; if any citizen decides to act on faith and trust in God, and not any human insurer to manage either risks or crisis, the “Act” forbids that person from acting on his own conscience. Yet this same act grants special privileges to select religious sects only. That exemption is based not on individual conscience but instead sects!

The “Act” makes clear; no individual may decide for himself that participation in such a program is a sin. The government mandates that they fund, for example, abortion-inducing drugs set forth in the “Act” regardless of their religious objections. Are Christians and Jews to be denied their religious conscience exemption and be made to violate their religious beliefs? I say never!

Interestingly, the Muslims exemption is based upon Sharia law. It stands to reason that a precedent is being set that allows Sharia law to abrogate Constitutional law as well as statutory law. Do not the provisions set forth in violate “equal protection and treatment”? Does not this “Act” elevate the Muslim faith above Christianity and Judaism, and other religions including secular atheism, Is not secular atheism a belief system which fundamentally is what every religion is?

As conclusively proven in Part I, and now in Part II the “Act” is unconstitutional. It is a “revenue raising bill” that illegally originated in the Senate. The House of Representatives fraudulently passed it, and ignored “positive law” in so doing. Then, one who has yet to demonstrate he is a “natural born citizen” signed it into law. Thus far it is incontrovertible that the act breaks the 1st, and 14th, Amendments. That includes a provision that prohibits any judicial review, in violation of the 5th Amendment.

Part III will deal with Articles and Amendments that will conclusively show that any employee that is either laid off or loses their job has a Constitutional right to sue for damages. I understand that no less than 45,000 could face this harm.

This three Part Series is only the beginning!