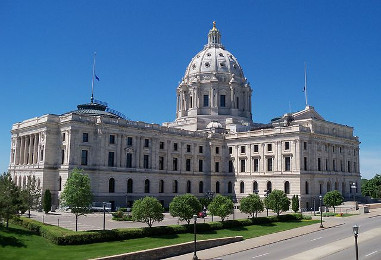 The front: homosexual marriage. The end: schoolchildren. And no State better illustrates that fact this week than does Minnesota.This week, Minnesota Governor Mark Dayton (labeled one of America’s worst senators by TIME) signed homosexual marriage legislation into un-law after the un-lawful House and Senate approved it. In concert these branches of the Minnesota government have proved themselves in defiance against the laws of Nature and Nature’s God, as found in the Declaration of Independence. In the Minnesota Supreme Court chambers, a huge mural of Moses awaiting the Divine Law of God testifies to their faces that they are incompetent to serve ‘We the People’.

It is important to note the chronological history of what took place before this immoral, unconstitutional, unethical, and unlawful bill was signed.

Timeline to apostasy in Minnesota 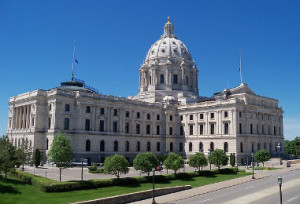 On May 20, 2011, I was invited to deliver the opening prayer at the Minnesota House session. Unbeknownst to me at the time, the Minnesota House was planning to vote on a constitutional ban on homosexual marriage (decided by the people in the November elections), much like 32 states have already done. The capitol was packed with supporters and protesters of the ban, and media coverage was heavy on the subject.


Even though my prayer made no mention of homosexuality, I was denounced by then Speaker of the House Kurt Zellers, a corrupt Republican who has since lost his position. The media flocked around to interview me after my prayer. While I was preparing for a press conference, I was approached by diplomats such as Senator Paul Gazelka who begged me not to talk to the media, afraid that if I did so the measure would not pass. The president of the Minnesota Family Council told me they would have to “distance themselves” from me due to the fact that they felt they had all in hand, and that my prayer was such an offence.

These “diplomats” were more concerned about not hurting anyone’s feelings than they were about protecting our posterity. They thought the route of delicacy would win over radicals who were determined to silence religious freedom and implement a radical homosexual agenda.

Their diplomacy was their ruin.

In a state with massive voter fraud issues (please research the Minnesota Secretary of State Mark Ritchie and his involvement with fraud), the ban on homosexual marriage was lost during the November elections (along with Voter ID). Minnesota Republicans voted Rick Santorum (a strong conservative) for their GOP Presidential candidate in the 2012 precincts, while the House, Senate, and Governor’s office became controlled by Democrats. If Minnesota Republicans are this conservative, how did they allow Democrats to be in control?

Once in session – before they even implemented a budget – both the House and Senate passed homosexual marriage. Coinciding with this bill was the “Safe and Supportive Minnesota Schools Act.”

Can you guess what was included in a large portion of this bill? That’s right! Anti-bullying policies… including gender identity and sexual orientation. Wait a second. I thought this was about homosexual marriage. Bullying has nothing to do with marriage. I obtained a copy of this bill. Under this Act, there will be an attempt for schools to be revolutionized to normalize homosexuality, and anyone who disagrees with sexually deviant behavior will be punished. This includes students’ behavior on or OFF campus BEFORE, during, and/or AFTER school hours. All staff and school volunteers will be forced to undergo annual training to ensure a “safe environment” for – let’s put it plainly – LGBT students. In other words, the state is attempting to take full control of the beliefs of the children of Minnesota, which is a UN global agenda.

During an interview on my radio broadcast this week (sonsoflibertyradio.com), a former senator from Minnesota, Gretchen Hoffman, told us pedophile groups such as NAMBLA (North American Man and Boy Love Association) will be asking for permission to lower the age of consent for sexual intercourse, just like Canada.


This is criminal behavior from people who are put into position to uphold the laws of our republic and protect the wellbeing of its citizens. Instead they are targeting the young to be made a prey by lawless criminals.

An open letter to Minnesota schools

Before this time, Minnesota Senator John Marty (a pastor’s son) had been deceptively trying to circumvent the people and implement homosexual marriage. In 2010, I wrote a letter to all school districts as well as all state representatives in Minnesota, warning of the destructive consequences of the radical homosexual agenda. Here are portions of the letter:

We all agree that our posterity deserves the best education, life, liberty and the pursuit of happiness that our forefathers fought, bled and died for. In order to preserve these freedoms, we must take care to uphold the laws and values that make a nation free indeed. After all, freedom is not given to do what you want to do, but what you ought to do.

As public schools already face challenges in teaching reading, writing, and arithmetic, intense pressure from the radical homosexual agenda is forcing schools to deal with a number of issues never before presented. There has been major attempts to normalize the homosexual lifestyle through education curriculum such as Comprehensive Sex Education, Anti-Bullying Policies, and the such [even going so far as to attempt to normalize bestiality.]


While the mainstream media wants to make this lifestyle out to be normal, healthy behavior, we want to make you aware of the actual statistics linked to this dangerous behavior:

Sadly, we could list many, many more statistics regarding the homosexual lifestyle and their crimes.

As a ministry that is committed to upholding the morals and values [as well as the laws of our republic] that make us a great nation, we have been a faithful-mouthpiece on our nationally syndicated radio program with multiple thousands of listeners. It is our job to educate America regarding who is upholding our Constitution, and who is not. We urge you to be aware of the statistics regarding this subject, in order to produce an environment of the healthy, quality education that our nation’s youth deserve.

Thank you for your time, and we trust you will do what is necessary for the security of our nation, our posterity, and our freedom.

After seeing these violations, I hope you can understand why God calls homosexuality an abomination.

Minnesota has ignored these warnings to their own demise. If any of our students are punished for their beliefs or violated by perverted, sexually deviant criminals, Minnesota’s schools and state representatives should be and will be held legally accountable.

A preacher friend of mine just reminded me where the state of Minnesota just put themselves: “Throw rocks at God and you will learn how gravity works.”