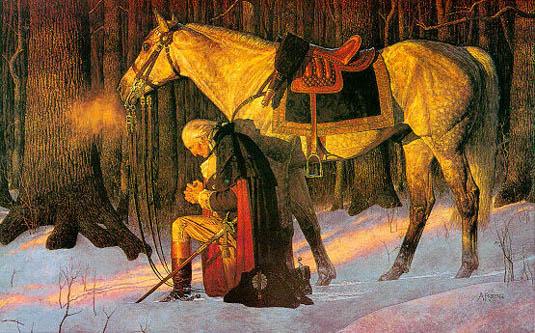 As you ponder the spectacle of Obama acting like a king, remember this: Criminals mock society’s laws. Your compassion is a weakness that your enemies do not and will not share.

As the White House has been slammed with scandals such as Benghazi, Extortion 17, the AP phone tapping scandal, targeting FOX News, and the IRS targeting conservative groups, Obama appeared before the nation at a press conference. In the middle of answering a question about the IRS scandal, it began to rain. Obama had the “audacity” to call up two marines to hold an umbrella for himself and the Turkish Prime Minister, stating, “Why don’t we get a couple of Marines [to hold umbrellas.] They’re gonna look good next to us.”

What a stark contrast to our first president, General George Washington!

Washington, the brave and the humble 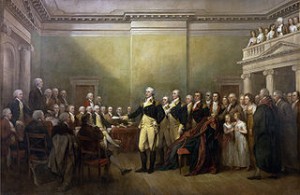 It was said that Washington was hailed as “first in war, first in peace, and first in the hearts of his countrymen.”

During the Revolutionary War, George Washington didn’t send someone else to go in his stead… and he certainly would not have asked anyone to hold an umbrella for him. He took responsibility and went himself to lead the call for independence on the behalf of the country and the people he loved. During this time, he had little-to-no money to fight the war, but he fought on with what he had and beat back the tyrant King George.

George Washington was also known as the man who could not die in battle, as he was shot at several times with bullet holes in his jacket, yet he survived unscathed. He told his family,

By the all powerful dispensations of providence, I have been protected beyond all human probability or expectation.

From Washington to Truman to Obama

Like King David, God protected Washington from his enemies.

In the past half-century, as we have seen the corrupt in government slowly usurp their authority and declare war on the American people, the “protection” of the president has risen to ridiculous measures.

A Congressional Research Service report investigated how much taxpayers spend whenever the president leaves the White House by plane. The report found that it costs $179,750 to fly Air Force One for just one hour! That expense is only for fuel, maintenance, and sundries; it does not include all the staff and security personnel that accompany every move the president makes.

Making the clear distinction between then and now, George Washington bears the cross, while this president wears the crown.

Anyone who travels to Washington, D.C., will know what I am talking about. When the president’s motorcade goes through town, every road is blocked off by armed officers, and any building the president enters is searched over with a fine-toothed comb.

Until Harry Truman’s presidency, former presidents were dropped off at their homes and were provided no special pension, security, or other benefits. They would become an average American citizen, just like those they served.

When president, Truman would take daily walks around Washington, D.C., with a bodyguard or two in tow. American citizens could walk right up and shake his hand.

What has happened since then? When presidents work for the people, they feel safe enough to walk up and be friendly with their constituents. However, when they work for special interests and are being treated as crowned kings (which they are not), they suddenly feel that they need to be protected from their constituents. Is the writing on the wall? Yes, indeed it is.

Look at the parallel between Washington and the current administrations:

… every word of (the Constitution) decides a question between power and liberty.

As the government increases control, this leads to a corresponding decrease of individual liberty and responsibility.

The real problem is when all this power becomes centralized and is left unchecked by the public, then comes the rationale that “they have the badge, they must be right.” Thomas Jefferson, who went through the era of the Revolutionary War, warned, “The two enemies of the people are criminals and government, so let us tie the second down with the chains of the Constitution so the second will not become the legalized version of the first.”

It has been said that laws are most numerous when the commonwealth is most corrupt. This video illustrates present-day criminals with badges. You may be shocked at who they are.

Eric Holder steps in it

Mr. Dean, if I ever wanted to hide money from you, I’d put it in a history book.