When Steve Lonegan announced his candidacy for Senate, we were truly excited, a true conservative Republican running for the US Senate, from New Jersey. Thereafter, we were informed that Dr. Alieta Eck threw her hat in the ring. Wow, the excitement continued; TeamNJ now had not just one true conservative for support consideration, but two!

So which of the two does TeamNJ support? At this time, all we can say is, we have two winners on the ballot in this primary, both with the correct political ideology. New Jersey and the country can not lose with either of them. 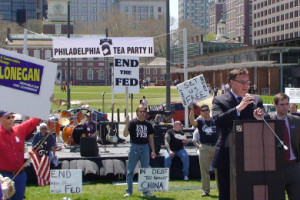 When you look at the two Marxist-Democrats jockeying for the same US Senate seat, you see two of the most liberal reprobates who have ever polluted the halls of Congress. Representatives Holt and Pallone. The third challenger is none other than the Mayor of Newark, Cory Booker. (Note: a fourth candidate, Assemblywoman and Speaker of the Assembly Sheila Oliver of Essex County, also qualified. See this PDF from the Division of Elections. – Ed.) The question many are asking: Will those two congressmen mount a savage attack on Mayor Booker and thereby risk alienating the reliable black vote? We can only hope they do.

As for Republicans and conservatives it’s imperative that we select a Senator who will best represent our state and our country, and as we decide, stay united against the assassins of our Constitution. For the first time in recent history, we have two such candidates in Steve Lonegan and Dr. Alieta Eck. What both campaign teams must do is, consistent with honorable conservative statesmanship, run a clean and noble primary campaign based upon what they can do and will do, as opposed to highlighting the possible shortcomings of the opponent. We are blessed with two fine candidates. Lets leave the mudslinging to the Marxist Democrats.

Why do we continue to call them Marxist Democrats? Simple, the Democratic party of your father, no longer exists. Allow us to remind the voters of a quote in a speech given by 6 time Presidential Candidate for the Socialist Party, Norman Thomas:

The American people will never knowingly adopt Socialism. But, under the name of “liberalism,” they will adopt every fragment of the socialist program, until one day America will be a socialist nation, without knowing how it happened.

He went on to say:

I no longer need to run as a Presidential Candidate for the Socialist Party. The Democratic Party has adopted our platform.

With all the shortcomings of today’s Democratic Party, they do remain loyal to the party line and always support their primary winners. It would be wise for Mr. Lonegan’s and Dr. Eck’s campaign committees and the Republican Party to take that page out of the Democratic playbook. (but please, only that page) Following the primary, join forces behind the winner.

We have noticed a few e-mails, not generated by either campaign, containing derogatory comments. Such activity does not serve New Jersey, but will surely serve her enemies.

We either elect a constitutionalist Senator to represent us and our fellow citizens or we get more of the same un-American socialists. Be assured, the media as well as their Democratic operatives, are experts when it comes to mudslinging. You can expect the usual lies and slander, as well as the compounding of things said in our primary. We all must be vigilant and professional throughout this primary election. The entire country will be watching. It is time to unite!

Whether, Steve Lonegan or Dr. Alieta Eck wins the primary, the other should not only support the winner but also keep their team in place. Thereafter, immediately begin to prepare for the all important Congressional elections of 2014. New Jersey and the country need men and women of moral character in the halls of Congress. Either one, Lonegan or Eck would serve America well, in any office, and after running a clean and honorable campaign based upon the issues, both of them will surely gain the support of constitutional and conservative groups such TeamNJ for future campaigns.

[…] shortly following a joint statement prepared by Mr. Nicholas Purpura of TeamNJ and myself, where we delivered a message to 17,000 of […]

[…] fact, Purpura put out a piece on Friday morning, urging both candidates to run clean campaigns, act like “family,” and […]