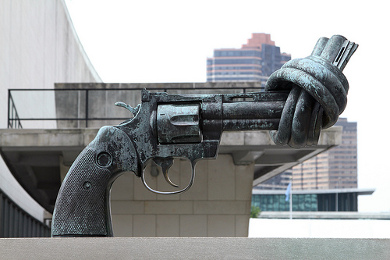 Well, America, once again we have been duped by the man now occupying the White House. While he put on a good show this week castigating the United Nations, Secretary of State John Kerry was wheeling and dealing behind closed doors. This bait and switch tactic would have made the Great Houdini proud.

How the smoke screen fooled everyone

We were not alone in our naiveté. Charles Krauthammer optimistically stated that Mr. Obama was a different man than just a year ago. However, the dastardly duo of Barack Hussein Obama and John Kerry may have been using the speech as nothing more than a smoke screen. And unfortunately, it was an effective smoke screen. Today the Viet Nam disgrace who is now our Secretary of State signed the U.N. Arms Trade Treaty – without so much as a whisper from the mainstream media.

What the Arms Trade Treaty is all about 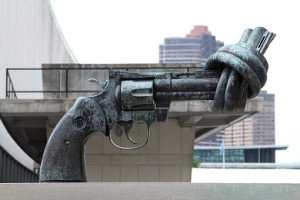 “Non-Violence,” statue by Carl Fredrik Reuterswärd; given to the UN by the government of Luxembourg in 1988. Photo: “Jim the Photographer”/Flickr, CC BY 2.0 Generic License

On 2 April 2013, the General Assembly voted in favour (sic) of the landmark Arms Trade Treaty, regulating the international trade in conventional arms, from small arms to battle tanks, combat aircraft and warships.

This is a victory for the world’s people. The ATT (Arms Trade Treaty) will make it more difficult for deadly weapons to be diverted into the illicit market and it will help to keep warlords, pirates, terrorists, criminals and their like from acquiring deadly arms. It will be a powerful new tool in our efforts to prevent grave human rights abuses or violations of international humanitarian law. And it will provide much-needed momentum for other global disarmament and non-proliferation efforts

In all parts of the world, the ready availability of weapons and ammunition has led to human suffering, political repression, crime and terror among civilian populations. Irresponsible transfers of conventional weapons can destabilize security in a region, enable the violation of Security Council arms embargoes and contribute to human rights abuses. Importantly, investment is discouraged and development disrupted in countries experiencing conflict and high levels of violence, which also affect their ability to attain the Millennium Development Goals.

The adoption of the ATT is a turning point: it will put a stop to destabilizing arms flows from its signatories to conflict regions. It will prevent human rights abusers and violators of the law of war from being supplied with arms. And it will help keep warlords, pirates, and gangs from acquiring these deadly tools.

The United Nations will provide its full support towards making the treaty work.

Sounds good, doesn’t it? In case you have forgotten, the U.N. or our liberal friends aren’t the first to try to pull the wool over the eyes of their sheeple. Heinrich Himmler once said:

Germans who wish to use firearms should join the SS or the SA – ordinary citizens don’t need guns, as their having guns doesn’t serve the State.

And of course I would be remiss if I didn’t quote the Fuehrer:

The most foolish mistake we could possibly make would be to allow the subjected people to carry arms. History shows that all conquerors who have allowed their subjected peoples to carry arms have prepared their own downfall by so doing.  – Adolph Hitler, Edict of March 18, 1938.

How the Arms Trade Treaty will really work

For those who still think that this may be a “good thing,” let me give you an alternative scenario. First, consider the fact that this Administration has been pulling out all the stops in trying to take our guns away. They have gone as far as supplying firearms to Mexican drug lords in order to create a Second Amendment crisis, as well as using the tragedies of Sandy Hook to tear at our heart strings – all to no avail. Americans still do cling to their guns and their Bibles – thank God – literally.

This newest ploy is nothing more than a back door way to legislate gun control in the United States and effectively repeal our Second Amendment with smoke and mirrors. The ATT will set up a global body which will require all nations to regulate firearms so that they can prevent their exportation to other countries. Inevitably, this will require countries to inventory the guns in private hands and to register them. Along with registration comes regulation and once regulation then turns into restriction, can confiscation be far behind?

The ATT countries will set up an international agency that will be in control of the flow of arms throughout the world. The UN will have the authority to tell member nations to adopt policies to facilitate regulations and flow across borders within their control and these controls will start with registration, but I can assure you, it will not stop there. Today Secretary of State John Kerry didn’t just sign some obscure and meaningless treaty; today Secretary of State John Kerry signed away some of our very precious sovereignty. I guess once a disgrace, always a disgrace. But let’s look on the bright side. Maybe this treaty will prevent Attorney General Eric Holder from sending arms to Mexican drug lords – are you laughing or crying now?

Next, the treaty will be sent to the Senate for ratification. However, if Harry Reid doesn’t bring it up for a vote, the treaty remains in effect until a president rescinds it. Until that happens, the treaty becomes the law of the land. Or – it can be rescinded by the United Nations, which would require that 180 countries vote to rescind. So there you have it, this is how a law becomes a law when evil men prevail.

Professors, back to elementary school!