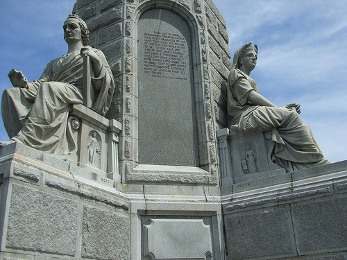 Inscribed on the bottom of one of the two statues in front of the National Archives building in Washington D.C.

Just this last week I have traveled through 15 states: Minnesota, Wisconsin, Illinois, Indiana, Ohio, Pennsylvania, Massachusetts, Rhode Island, Connecticut, New Jersey, Delaware, Maryland, Virginia, and North and South Carolina, reaching out to high school and college students in hopes of finding those who will take the baton that the forefathers of America have given unto us. All in hopes of those students forging ahead a future for themselves and their posterity.

Yet, how are they to forge ahead if they themselves do not know what America’s “His-tory” has to reveal to them? In my endeavors, I found that what I thought I knew was only the tip of the iceberg in a plethora of information still left undiscovered; that is, as to whom we are as Americans.

As you know, friends, America is under attack on a daily basis from an un-American, communistic, totalitarian mindset. In fact, it has been stated by Dictator Joseph Stalin,

America is like a healthy body and its resistance is threefold: its patriotism, its morality and its spiritual life. If we can undermine these three areas, America will collapse from within.

Every American should take the time to see what our enemies within attack. This is where they expose themselves, and what it is that they fear the most.

If you are tired of the rhetorical sound of circular reasoning (bringing about no resolve), and defeatism, and would like to see resolve brought to your country, then simply “study the past.” Then and only then can you stand with your feet fixed firm upon the rock (Matthew 16:18) of knowledge and understanding (Hosea 4:6).

Now I know that there are skeptics out there that could be transported to the sun and still deny its existence. But the good news is, I’m only going to reveal to you some of America’s landmarks which, in some cases, are literally in your backyard.

The Monument to the Forefathers 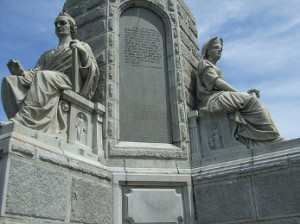 Lastly, the Matrix of Liberty, or “The Monument to the Forefathers” is a very short distance (blocks) away from “Plymouth rock” and the replica of the “Mayflower” ship. This is, of course, the location where the Pilgrims landed after seeking civil and religious liberty. Unfortunately, this monument is overlooked and is virtually hidden.

The Monument to the Forefathers is undoubtedly the most precious hidden relic of America. It is also believed that this monument was to be one precedent for The Statue of Liberty.

This monument is so blatantly Biblical, its presence so overwhelming, with a message so heart wrenching, that anyone questioning God’s hand in the building of our great Nation could be considered a lunatic.

Clearly, the recipe for American liberty is written on this monument for all to see (Joshua 4:6-7).

Standing at a staggering 81 feet tall, the following pillars of freedom are depicted on The Monument to the Forefathers:

First, FAITH is a 36 foot, classically draped female standing with one foot on Plymouth Rock. She is holding an open Geneva Bible in her left hand while her right hand is uplifted to heaven. The Pilgrims were children of the Reformation, with Christ as their mediator and the Bible as their source of wisdom (hence the star of honor on her forehead). Hammett Billings, the architect, wrote, “she looks downward as if to those she is addressing, seeming to call them to trust in a higher power.”

Next, MORALITY is a woman holding a tablet of the 10 Commandments in her left hand and the scroll of Revelation in her right. On one side of the throne is the Prophet Moses holding the tablets of the Law and looking toward heaven; and on the other side is an Evangelist writing in a book.

EDUCATION is a draped woman pointing to a book in her lap. The small figures in the niches to the right and left of her chair represent Wisdom and Youth.

LAW is portrayed as a draped male also holding a book. His chair is supported by Justice (a woman with scales and sword) and Mercy.

Lastly, LIBERTY is a helmeted male, draped with a lion’s skin, cradling a sword in his right arm and holding a broken chain in his left. The figures in niches on the sides on his chair represent Peace (a woman holding a horn containing food and drink) and Tyranny (a king laid low). These are meant to symbolize peace resting under the protection of liberty, tyranny having been overthrown by its power.

The engraving below the pillar of FAITH reads:

NATIONAL MONUMENT TO THE FOREFATHERS ERECTED BY A GRATEFUL PEOPLE IN REMEMBRANCE OF THEIR LABORS, SACRIFICES AND SUFFERINGS FOR THE CAUSE OF CIVIL AND RELIGIOUS LIBERTY.

Friends, let us consider the final inscription. If we as a people are grateful to those who have labored and sacrificed through their sufferings for the civil and religious liberties that we have today, could we as a people stand down when we all know that we should stand up? You decide!

Study the past so that you can clear the path to your future through labor, sacrifice, and suffering. This will put your enemies within out of business!

You should see what MSNBC and Rachel Maddow did to Bradlee Dean. Help in his lawsuit against them. Stand for America and get your free gift.

No Man is Above the Law