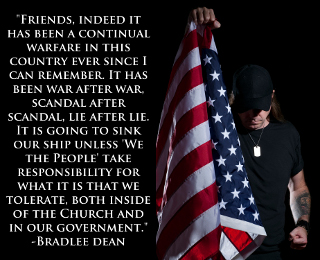 As I was listening to two conservative news anchors bantering back and forth in a comical manner, asking one another as to what scandal they thought was most controversial in 2013 (the IRS targeting of conservative groups, Obamacare lies and its unconstitutionality, the Benghazi cover-up, etc.), I thought within myself: This is some serious irresponsibility going on through those who are responsible for helping preserve our republic.

Friends, what would you think of me if I knew that the ship we were on was purposely being destroyed by a few outlaws (corruption in the government), blowing holes in the bottom of the ship in hopes of sinking it, and I sat back with a smile on my face asking others on the ship, “Who do you think blew the bigger hole?” Acting as if I were exempt from being on the same ship that everyone else was on!

As I thought on this, it came to me that the problems with our country are not the media or the government’s fault alone. The media watchdogs only stay afloat by the sponsors that support them, and the people are responsible for supporting the sponsors. In regard to government, government derives its just powers from the consent of “We the People,” and the government in this country only reflects what the people tolerate. I also realized that our rights come from the hand of God, and those rights are maintained by fighting the good fight of faith (1 Timothy 6:12), which reflects what is, or is not, being preached from the pulpits across our land. 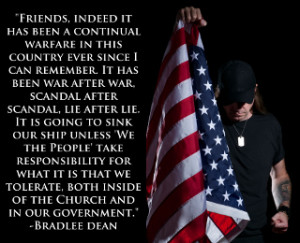 I recently came across this quote that comes to my aid:

In other words, America is now bearing corrupt fruit, opposite of what our founders established through acting out what the Bible and the Constitution commands and requires.

How you may ask? Through what “they” tolerate others to do to the ship we are all on.

Who are “they” who threaten our republic?

Who is to blame? We often see the finger pointed at those who are only reflecting what is tolerated, as if to say that “they” are the problem. Who I ask, my friends, are “they”?

Talk to the average American and they are led to believe that the problems in this country belong to someone else; therefore, someone else needs to right the wrongs that they, as Americans, are obligated to right!

If it is not the professed church decrying that there is nothing that they can do because iniquity has overtaken America, then it is the conservative of the day complaining about corruption in government. Iniquity has taken over the “professed” church and much of the government because “they” have been derelict of duty in honor to God, and love toward man, in the preservation of this most blessed country of ours. Gratitude leads to duty. Friends, “they” again are simply the American people, and until you take responsibility, nothing is going to change. As we have heard time and again  in the past six years, the change that was promised is not the change that we wanted or expected.

Friends, indeed it has been a continual warfare in this country ever since I can remember. It has been war after war, scandal after scandal, lie after lie. It is going to sink our ship unless “We the People” take responsibility for what it is that we tolerate, both inside of the church and in our government.

John Hancock, the first person to sign the Declaration of Independence, took responsibility for the wrongs of his day by taking action against those who were usurping the rights of man. Hancock stood in the face of the tyrant King George. In fact, he purposely wrote his name so big that when the tyrant King George read the document, he did not have to put on his spectacles to read it.

Resistance to tyranny becomes the Christian and social duty of each individual. … Continue steadfast and, with a proper sense of your dependence on God, nobly defend those rights which heaven gave, and no man ought to take from us.

Are You Worthy of This Republic?


Will You Live for Her?