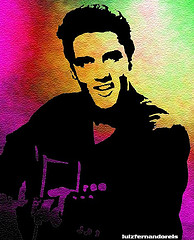 Elvis Presley is one of the original rock ‘n’ roll stars. He made millions in show business. While being interviewed on the air, he was asked, “Mr. Presley, how do you account for the happy, joyous expression you always seem to have on your face?” Elvis answered, “Because I have to in order to make a living. Inside I’m as lonely as hell.”

Over the past week while I was in Anaheim, Calif., I took some time to go win those who are a part of the rock ‘n’ roll world to Christ. These “rock stars” are nothing more than evangelists in rock ‘n’ roll attire who simply have not been told the truth of God’s Word through demonstration. And it is about time that the truth is told so they can be set free in Christ (John 14:6). It has been said we should “preach the Gospel to the world and if you have to, use words.” (1 John 3:18)

Friends, do you ever wonder, if these rockers are so happy with their lifestyles, why do they use drugs? Drink alcohol? And in many cases even commit suicide? Many of these rockers’ friends are so poor that all they have is money. And what is it for them to gain the whole world and in the end lose their souls? (Mark 8:36)

It is time for Christians to get bold for THE Christ they say they believe in – standing with an uncompromising message, and that being a message of LOVE (1 John 3:18)!

Those who have been forgiven much without a doubt love much. Loving namely the One who died for them. How can we not live to the utmost for him who died for us (2 Corinthians 5:15)?

Parable of the wounded dog

The story is told of a man who is driving through town, when suddenly he saw a wounded dog on the side of the road. Moved with compassion, he pulled over, picked it up, put it in his car, took it home and began to nurse it back to health. He bandaged its wounds, began to feed it, gave it affection, attention and a lot of love. One day after the dog had made a full recovery and the man was walking through the house carrying it in his arms, all of the sudden it jumped down, scampered out the door and disappeared. The man stood there dumbfounded, thinking to himself, “I save that dog from the brink of death, I brought it into my home, I fed it, I nurtured it, I gave it love and affection and attention, and it just scampers off and disappears. What an ungrateful little creature!” Until the next day, when he heard a scratching at his door, only to open it and find that same dog standing there with another wounded dog right beside it.

That’s how it is with the Christian and his compassion for the lost. We ourselves were once blind, we were lost, we were literally on the brink of death and Hell, and God reached down, rescued us, saved us and healed us. And our passion in life now is to tell other lost sinners where they can find healing from the Great Physician.

The video below is me taking the Gospel to the rockers on their own turf. Going forth to “seek and save that which is lost” (Luke 19:10). What better place to go than to those who are influencing the next generation? Watch and see as we proclaim the Gospel of Jesus Christ and “influence the influencers”!