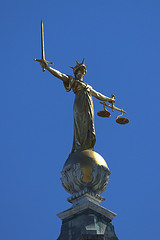 During my radio show this week, I was talking about how “blaming God for all of the evils in this world is like blaming the sun for darkness.” In other words, God is blamed for the evils in this world rather than the good He gave, and still gives, through Jesus Christ (John 3:16) and that He continues to give through His mercy on a daily basis (Psalm 103).

There is a story told of a man in a London airport who decided to purchase some English butter cookies. He opened the small tin, took one out, then placed the tin at his feet. After waiting for his flight for some time, a middle-aged woman smiled politely and sat next to him. To his astonishment, without a word of permission she reached down, took a cookie out of the tin and ate it.

He couldn’t believe what the complete stranger had just done!

Suspecting that it may be a local custom, he smiled awkwardly and took a second cookie himself. She then took a third.

Then she took the very last cookie, looked at him, broke it in half and offered it to him. The audacity of the woman! Different words such as impudent, rude, brazen and presumptuous flashed through his mind.

As he was about to express his thoughts, he bent down and saw that his identical tin of cookies was still at his feet. In an instant, he realized that he had been the brazen, rude and impudent person. He had been eating the cookies of a complete stranger! He also realized how her response to his actions had, in truth, been very gracious.

When you look a little deeper at the plight that man has put himself in, you will find that it is man and sin man chooses to commit which are responsible for the evil in this world (James 1:12), not God.

Disobedience to God is the real root of evil

Man not following the rule of God’s government is the very reason evil exists in this world! It always has been and always will be.

There are so many wars within and without that could simply be prevented if man would subject himself to the meek King of Glory, and yet, because he rebels, war continues, and man has the audacity to blame God.

Let’s go through the Ten Commandments to see the reason for the evils in this world!

All the miseries and evils which men suffer from vice, crime, ambition, injustice, oppression, slavery and war, proceed from their despising or neglecting the precepts contained in the Bible.

Friends, have you despised or neglected God’s Holy Laws and precepts contained in the Bible? Therein lies the evil that prevails. (Romans 7:14-25)

And before blaming a merciful God for the darkness that man is responsible for, we might want to take a step back and realize that it was God the Father that gave His only begotten Son to die on the cross for man’s violation toward God’s Holy Law (John 3:16), in order to establish The Light!