How often can you see across America on a street corner, under a bridge, on a highway overpass, or in front of a store, a poor person with a sign asking for charity from people who can lend a helping hand in a time of need? They hold signs stating, “Homeless and Hungry,” “Have no food or money,” etc. I have also noticed that these poor people, almost without fail, have a cigarette hanging out of their mouths (a pack of cigarettes is $5.95), a bottle of booze (a cheap bottle is around $10) in a little brown paper bag, or lottery tickets in their hands. Not too long ago in the state of Minnesota, a news outlet did a piece concerning the poor that were out on the streets and found that these people were making up to $400-$600 dollars a day. Not bad for a poor person’s day of working the sympathies of the American people. 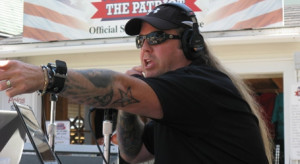 Now, friends, do not get me wrong here. I have on a personal level helped those who were broke and homeless on a couple of occasions. I understand from personal experience their plight due to the fact that I was a welfare kid. I hated it so much that I just needed a little push in the right direction in the hopes of having never to return to the slough of despond.

In one particular case, when I was on a club tour living off a $5 a day per diem, I saw a man off of one of the highways in Missouri. My heart went out to this man, so I gave him the $5 I had to eat only to find out that after I gave it to him he went into the store and asked my bass player if he knew where he could buy some marijuana.

On another occasion, I saw a man in north Minneapolis (the hood) stating that he was a veteran, had no money and nothing to eat. I told this man that I would pay for his dinner across the street if he wanted to meet me at the restaurant. He wanted nothing to do with it; he just wanted the money. He wanted the money so he could go to the liquor store, which was on the other side the street. He also looked completely able-bodied to work, as most of them do.

The fact of the matter is that a good majority of these people do not want to work, and when it comes to them being poor, they are simply destitute of the righteousness of Christ. They are simply morally corrupt. There is a reason the apostle Paul wrote, “… that if any would not work, neither should he eat.” (2 Thessalonians 3:10) How many people overlook what the Lord commanded and are responsible for enabling those who do not want to work in order for them to remain overweight or drug dependent? How many enable these people in order for them to remain alcohol abusive? How many enable these people so they remain jobless? How many are willing to lay a greater burden on those who actually work because they feel bad for those who do not want to work? Again, I do not have a problem with helping those who want to get back on their feet, yet the problem is that there are people who do not want to get back on their feet. They want to add to the burden of those who are already working to sustain themselves and their families. And to prove my point in showing how poor is America is not, here are some statistics to lay to your candor:

So, how poor is America?

This video is of a man who was a committed Marxist raised up in Puerto Rico to come here and help destroy America from within. When he came to America he converted to America’s ideals and began to expose the enemy within. What he noticed was the victim and entitlement mentality of the “poor” that was destroying this country.

“Blessed poverty, give me more.”

Listen to Bradlee Dean on the radio 6 days a week! (www.sonsoflibertyradio.com)

Autism: looking in the wrong places

This article is all over the board. There are different levels of poverty including the working poor, the non-working poor, the under- housed (no permanent address), the homeless etc. This article seems to address several of these categories as though they’re the same when they’re very different. Also, one has to understand the nature of biochemical addiction and that it’s not simply laziness or a lack of will power; the withdrawals are excruciating and, for an alcoholic, very dangerous even deadly without proper medical supervision.