What was the purpose of the founding of these United States of America and the creation of our Constitution? Before the migration from Europe to this newly discovered land, all people of the civilized world were ruled by Kings. Even the original thirteen established states of this new land were ruled, as a colony, by the King of England.

The real import of the shot heard round the world

Then something very profound and monumental took place, Independence was declared and the American Revolution was underway, a war for the freedom of man ensued. A group of men bent on their desire to be free and rule themselves in a land where the government answered to the people and not the people answering to the King and his court, rose up and risked their lives and fortunes in an attempt to end government dictating to, taxing at will, and over regulating the people. Through the shedding of their blood and fortunes the American Constitutional Republic was born, an experiment in self government. As you know the opening shot fired in that revolution was called, “The shot heard round the world.” It was so called because it was “the people” in rebellion against, not only the King of England, but against mankind being ruled by kings. 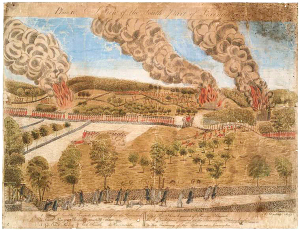 Percy’s rescue at the Battle of Lexington. Engraving: Amos Doolittle, from a sketch by Ralph Earl. 1775.

Kings and dictatorial leaders all over the world heard that shot. They heard the shot that proclaimed that men were now in rebellion to being subjects of a government, or King, and willing to challenge it.

We Americans celebrate on July 4 every year, the marking of American independence from England and its King, a very radical departure from governments which prevailed all over, ”round the world”, at that time, and for thousands of years before. Never before in those thousands of years had the rule of Kings ever been challenged. Kings challenged each other, but never had the people challenged the Kings and their rule.

Is the United States an exceptional country? Barack Obama has stated publicly that he doesn’t think it is. I quote Thomas Sowell,

You couldn’t be more exceptional in the 18th century than to create your fundamental document, the Constitution of the United States, by opening with the momentous words, We the people.

“We the People” – a motto of freedom

Those three words were a slap in the face to those who thought themselves entitled to rule, and regarded the people as if they were simply human livestock, destined to be herded and shepherded by their betters. Indeed, to this very day, the elite who think that way, and that includes many among those who regard themselves as the educated and enlightened class, as well as the Liberal news media and political messiahs, find the Constitution of the United States a real pain because it stands in the way of them imposing their will and their presumptions on the rest of us.

Barack Obama stated in a public interview on T V, “If Congress doesn’t do what I think is necessary, I won’t wait on them, I’ll do it anyway.” And we all heard him say, “We’re not just going to be waiting for legislation. I’ve got a pen and I’ve got a phone. And I can use that pen to sign executive orders.” Never before in American history has any president so blatantly and openly shown such disregard and out and out contempt for our Constitution as the rule of law. He just simply ignores it, as he just did with an Executive order changing our immigration laws. It is very apparent that his swearing to “uphold and defend” it, upon taking the oath of office, means absolutely nothing to him.

Our Constitution was designed to create a framework for a Federal Government, and worded to keep the government inside that framework. In other words, the very existence of the Constitution is for the sole purpose of laying out in detail the limited powers it is allowed by us to have, and reserving all other powers to the states or the people. Let us ask ourselves, does the Constitution matter? I submit to you, if it doesn’t, then neither does our freedom. If it doesn’t, America, we are on a collision course with full blown Socialism.

As you know, on November 4th we took charge and hired people to go to our seat of government and try to stop Barack Obama and his Socialist leaning supporters there from destroying our Constitution. Not only is he ignoring our Constitution, he is ignoring us also. He will not even recognize that election result. I am very concerned about the drums beating on all news networks, including Fox, for those people to compromise and work with the president and the Liberals (Socialists) so as to “get something done.” We should never comprise with the shredding of the Constitution, further loss of Individual Liberty, and the Federal Government growing even more powerful. If this kind of compromise happens, Barack Obama will have two more years to complete his burning mission to turn this nation into the Socialist States of America. The Constitutional Republic of These United States of America will no longer exist and our Individual Liberty, to make and be responsible for our own decisions, will be gone from our lives forever. I, for one, do not believe for a moment that the people intended for our Constitution and Individual Freedom to be compromised for the sake of “getting something done.”

I pray that God bless America and keep us free.

Liberty: guard it or lose it