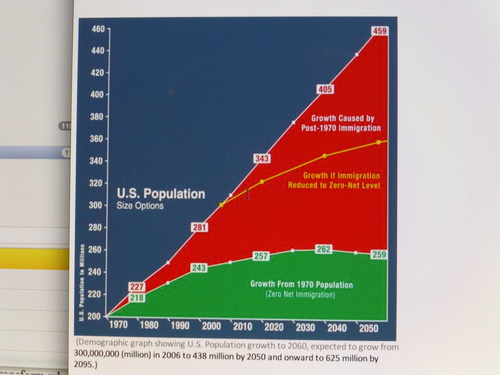 Additionally, the world population grows by 80 million annually, net gain, mostly in “developing countries” also known as the Third World.   Humanity adds 1 billion more people to this planet every 12 years. Projections show world population growing from 7.3 billion in 2015 to as high as 10.1 billion in 2050. Population momentum may continue past 2050 to exceed 14 billion.   The devastation to the planet’s ecosystems accelerates as to species extinctions, water shortages, floods, hurricanes, warming oceans, acidification of oceans and climate destabilization.

Let’s look at a population graph of where we’re headed: 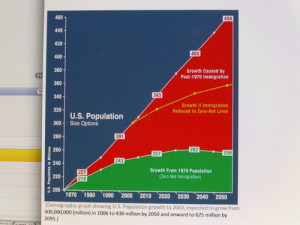 Unfortunately, if you asked the average American citizen about overpopulation, you would received a “dumb look” of “Here? In America? Can’t be! I thought overpopulation meant China or India….” You would also receive the same response from U.S. Senators, House Reps, governors and mayors of cities across the country. It’s “temporal blindness”, which means:

What keeps this game going? Oil, coal and natural gas. Each fills the category of “non-renewable resources”, which means, at some point, all face exhaustion.

As we go from this happy hydrocarbon bubble we have reached now to a renewable energy resource economy, which we do this century, will the “civil” part of civilization survive?  As we both know there is no way that alternative energy sources can supply the amount of per capita energy we enjoy now, much less for the 9 billion expected by 2050. And energy is what keeps this game going. We are involved in a Faustian bargain—selling our economic souls for the luxurious life of the moment, but sooner or later the price has to be paid.  Walter Youngquist, energy

To make our population predicament clearer, enjoy this nine-minute video that shows you graphically and clearly what our civilization faces within the next 35 years. You may find this video at www.skil.org  Dr. Jack Alpert created it to give you a clear picture of what humanity faces in the 21st century, i.e., your children.

Once you watch the video, you cannot return to “temporal blindness” because you understand the collision of human numbers with limited energy sources. Once the human race exhausts those energy sources, we humans face feeding 7.3 billion to as high as 10.1 billion without any ability to supply those tractors with gas or electrical power plants to create electricity.

In America, we face the same “overshoot” of human overpopulation that faces most other overpopulated countries in the world like India, Bangladesh, Mexico, China, Indochina, all of Africa and into South America. No one escapes overshoot in the 21st century.

Therefore, as you read this series and watch the videos, it’s time to become a part of America’s discussion-debate on our overpopulation predicament. Share these videos. Push for discussion at all levels. Join these organizations to empower your voice:

In a five minute astoundingly simple yet brilliant video, “Immigration, Poverty, and Gum Balls”, Roy Beck, director of www.numbersusa.ORG, graphically illustrates the impact of overpopulation.  Take five minutes to see for yourself:

“Immigration by the numbers—off the chart” by Roy Beck

This 10 minute demonstration shows Americans the results of unending mass immigration on the quality of life and sustainability for future generations: in a few words, “Mind boggling!”  www.NumbersUSA.org

Most Americans, Canadians, Europeans or Australians along with their elected leaders—fail to understand their predicament: a self-inflected victimization-date with destiny.

What you can do to start a national discussion:

Additionally, I will speak on any TV or radio show in the country with excellent articulation and acumen.  If not now, then who and when?

Robert Siegel at Talk of the Nation: talk@NPR.org

Take action by joining for free:

This is the same Malthusian hogwash of the 60s that by the 90s humans would outstrip food supplies. It is used by Statists to gain power over humans. Take a different perspective and realize the more humans, the greater abundance is as true as this statistical drain water.