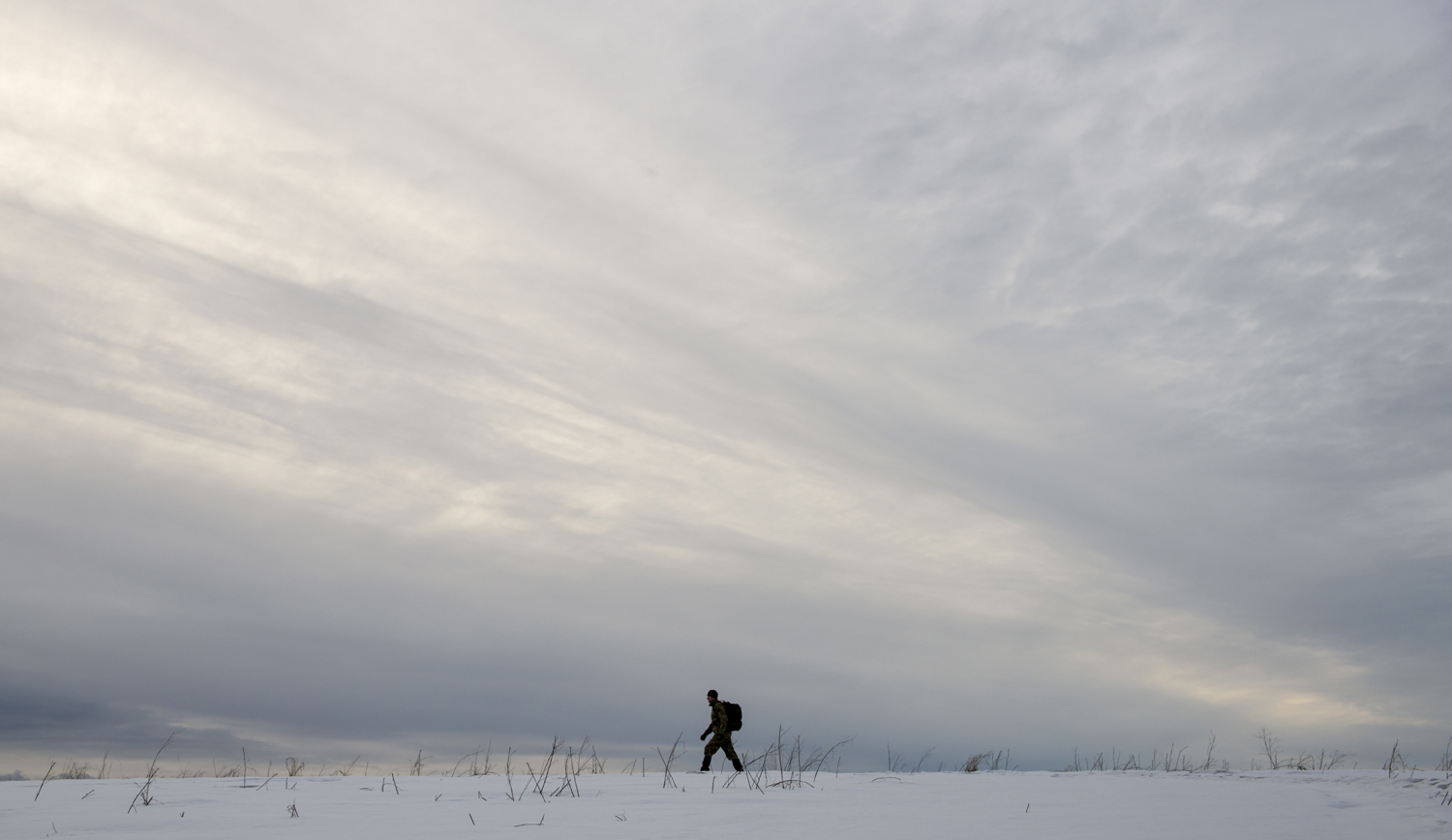 A few miles north of Eielson Air Force Base, Alaska, a group of students stand, huddled together along a three-mile, snow-capped mountain ridge jutting through the frozen Arctic tundra.

“Mother nature does not like you in this situation,” shouts Survival Instructor Staff Sgt. Seth Reab, as billows of hot breath escape his mouth and crystallize in the early morning freeze. “ She’s violent. She’s harsh. Your job is to survive until help comes; her job is to find a way to take your life.”

Staff Sgt. Seth Reab, Det 1, 66th Training Squadron, Arctic Survival School instructor, creates a small fire with a pile of tender branches during training. Fires can be used for signaling, heat and food during real-world survival situations. To become a Survival, Evasion, Resistance and Escape specialist, one must know how to create a fire in many different types of weather conditions.

The students have just begun a battle of survival, and in these extreme elements, even the mightiest of men have lost their fight. It’s Reab’s job, along with seven other Arctic Survival School instructors, to teach the students to overcome their personal limitations and give them the tools to win and survive.

“It’s their life on the line, not ours,” said Reab who’s assigned to Det. 1, 66th Training Squadron at Eielson AFB. “When a pilot egresses from their plane, they’re on the ground. It’s them that’s going to get injured; it’s them that may have issues out there. We’re never going to be by their side, so we need to show the students what they’re made of.”

Cool School open to all

Each year, more than 700 students attend the Arctic Survival School’s five-day course. While a majority of the students are Alaska-based aircrew, the course is open to all.

According the school’s commander, Maj. William Mercer, the school regularly has students from the Coast Guard, National Oceanic and Atmospheric Administration and other organizations that find their members operating in arctic conditions.

Surviving and returning with honor is every service member’s mission when they find themselves lost behind enemy lines and out of contact with their wingmen, according to Reab, who has been a survival, evasion, resistance and escape specialist for more than eight years.

“Imagine being by yourself in the middle of nowhere, you’ve just egressed from a fighter (aircraft) and you’re floating to the earth,” Reab tells his students. “All you see is thousands upon thousands of miles of nothingness — just trees and snow. It’s going to cause you to second-guess yourself. That psychological aspect — you’re going to have to fight and overcome that.”

Making that mission even harder is the lack of tools an ejected pilot or aircrew member might have at their disposal.

The survivor is only going to have a finite amount of gear, Reab said. “Out here, if something breaks, you can’t throw it out. You have to look around. You have to figure out how to make something that’s going to function. If you want something, you’re going to have to develop that item.”

“We have all this stuff around us. We need to find a way to use it,” Reab said. “In extreme cold, your own equipment is going to have its own fight for survival. You have to fall back on primitive means.”

Staff Sgt. Ryan Rogers, Det. 1, 66th Training Squadron, Arctic Survival School instructor, explains how to melt snow and filter it through a parachute bag during field training at Eielson Air Force Base, Alaska. The course is five days in duration with instruction in familiarization with the arctic environment, medical, personal protection, sustenance and signaling.

Those primitive means have been taught at the Cool School for nearly 60 years, making the course one of the oldest in Air Education and Training Command. Even with that extensive history, the course curriculum hasn’t changed much, since the practice of primitive survival in the Arctic isn’t based on the latest technology.

Once survivors are able to get in the right mental state and begin improvising things around them, the battle’s momentum begins to swing in their favor. They begin fighting back.

Use the elements to your advantage

Gathering his eight students, Reab coaches the survivors on how to use the elements around them to begin to win their fight against Mother Nature.

Within hours of their hike into camp from their simulated crash site, students begin to run out of water.

Staff Sgt. Seth Reab, Det. 1, 66th Training Squadron, explains the importance of drinking water and the advantages of a canteen during survival situations at Eielson Air Force Base, Alaska. The course is five days in duration with instruction in familiarization with the arctic environment, medical, personal protection, sustenance and signaling.

Reab demonstrates how to build a fire using materials gathered from what is around them. Once the fire is built, the students are shown several methods of gathering water from snow using either a parachute, which would have been at their crash site, or an empty tin can.

“These methods have been taught for decades,” Reab said. “They work, which is why we haven’t changed our lessons much.”

As the students gather around Reab like Boy Scouts huddled around their Scout leader, the instructor teaches them how to convert the same snow many would consider an adversary into an ally.

On the first night in the field, students are taught to build a primitive shelter, absent isolation and left wide open for any heat to escape.

“Yeah, that sucked,” said one student the next morning. “This is going to be a real (pain) if we sleep like that again.”

During the second day, Reab teaches the students how to build a more advanced shelter and use the elements to their advantage, giving them a good night’s sleep in a warm shelter.

“Most people would look at snow and say, ‘If I touch it, I’m going to get cold,’” Reab said. “We can turn around and use snow for more warmth by covering a small structure with eight inches of snow. Using this thing that people would consider harsh or damning in a survival situation, you’ve created a thermalized structure.”

Built around a frame of wood and a parachute or tarp, the thermalized A-frame structure Reab teaches his students to build can reach temperatures up to 30 degrees.

When temperatures are below zero, the victory of getting even slightly warmer could start to tip the scale in favor of the survivor — especially from a psychological standpoint, the Cool School instructors say.

Inside their cramped individual structures, the students are left alone overnight with just their thoughts.

“There’s a lot of stuff that’s going to mess with your mind out there,” Reab said. “Off in the distance, all you hear is howling wolves. (If) I’m out here, in the middle of nowhere, and I’m sleeping in a life raft covered with snow, it raises a few hairs on the back of the neck.”

Reab says the ebb and flow of a person’s mental battle is natural. “You make a shelter, but then there are wolves. You melt snow into water, then you spill it on yourself and it freezes. But there is one thing you can control: mental strength.

A strong mind helps you survive

“People who have that determination … that will to survive – those are the ones that have the positive mindset to survive,” he said. “The people who are weak minded are the ones you hear about in the news, who curl up under a tree and die.

Displayed through the Arctic Survival School’s halls are nearly 100 newspaper clippings of men and women who have fought this battle against nature, some who survived and others who didn’t.

Staff Sgt. Seth Reab, Det 1, 66th Training Squadron, Arctic Survival School instructor, creates a small fire with a pile of tender branches during training. Fires can be used for signaling, heat and food during real-world survival situations. To become a Survival, Evasion, Resistance and Escape specialist, one must know how to create a fire in many different types of weather conditions.

Losing this fight is something not many imagine, but keeping death in mind is key, Reab explained.

“Death is something people don’t like to think about. You don’t like to think, ‘Hey, if I don’t do things right, I might die out here,’ but that’s exactly how you have to think,” said Reab, who grew up in the Smokey Mountains of Tennessee. “If you don’t take care of yourself and meet your basic needs, you’re going to die. What are you going to do to make it through the night?”

The thought of losing this fight is not an option for Staff Sgt. Joseph Riemer, an explosive ordnance disposal technician assigned to the 354th Civil Engineer Squadron at Eielson AFB.

“If I can’t survive in these elements, I won’t be able to do my job,” Riemer said. Considering his job is to disarm explosives, lives depend on Riemer being able to properly perform his mission.

Not long ago, Riemer, along with his fellow EOD Airmen, had to disarm a homemade improvised explosive device in a northern Alaska village. Reimer’s unit responds to all IEDs in Alaska, north of the 65 parallel.

Riemer’s team was dropped off and had to survive on their own, with very little help.

“In these conditions, we can’t always use our robot to take care of an ordnance,” he said, noting how the extreme cold can destroy their electronic equipment. “Something like frostbite on my hands could be a game changer. Even just knowing how to make a fire from nothing will help.”

With the average January temperature for nearby Fairbanks being about minus 17, frostbite will form in roughly 15 minutes and can bring grown men to their knees, Reab said.

That extreme cold was something Coast Guard Petty Officer 2nd Class Kevin Brewer, an HC-130 navigator from Land O’ Lakes, Fla., never experienced until he participated in the course.

“Honestly, this sort of environment isn’t something I’m used to, which is why I wanted to attend the course,” said Brewer, who spent 29 years in Florida, including six years of Coast Guard assignments, and is now stationed in Kodiak, Alaska.

For Brewer, mental toughness played an integral role in passing two nights and three days living outside in the extreme cold.

Though this training wasn’t life or death, Brewer chose to treat it as a high stakes game. The only thing on his mind was survival.

“If I need to use this training, chances are it would be a situation where I either survive or I don’t,” Brewer said. “This was like a fight. I won this round. I hope I’d win the next. Not coming home to my family is not an option for me. Mother Nature won’t beat me.”

Crossing the bridge into 2015