“These sodomites wanted the organizer’s house to be burned down with his wife and children in it.” So read a post on Facebook at the Bradlee Dean page.

Over the last 14 years of ministry, I have presented my message thousands of times to high schools, colleges, Tea Parties, churches, and prisons, as well as radio and television interviews across the country and around the world at SonsOfLibertyRadio.com. Most people have received my message with ready minds and with open hearts.

That is, up until this last week. Dave Daubenmire (“Coach Dave”) and I were in Jenison, Michigan to speak about “God and Country.” The group we spoke to were comprised of 100 paid college protesters, who were bused in, a school superintendent who was going along to get along, a police force that stood down when they should have stood up and a mayor, who was condemning the event organizers at every step of the way (Isaiah 59:15).

On top of all of this, the “useful idiots” of the state-controlled media were lined up to highlight the protesters of the community against myself, Daubenmire and event organizer Brian Klawiter, who were guarded by 12 security guards and 12 sheriff’s deputies. For the most part, the media sought to turn the sodomite supporters lies into truth (Isaiah 5:20).

We later discovered the sodomite activists were threatening local church leaders to either bow and protest with the sodomites or they would be labeled as “anti-gay” and “anti-Christian” churches that do not stick to the doctrine of “loving” all people (Leviticus 18:22; 20:13; Romans 1:24). Only two of the churches out of 824 aided the protesters. The other 822 churches remained silent in the advancement of the gates of Hell. However, through their silence they were helping this abominable activity along.

…but we take it to them

Despite the opposition, we were not deterred. It only encouraged us to go forward (1 Thessalonians 1:5).

There were about 300 people who showed up for the event. Of that number, only 100 were protesters.

Each speaker took to the stage to present his message, and as each man spoke, the protesters would attempt to silence them with chanting and outbursts.

However, I began to give them something they did not want conveyed to the 200 supporters. I exposed their crimes. After exposing the crimes of the sodomites, along with referencing state law, I began to reprove the churches for not reproving the works of darkness (Ephesians 5:11; Amos 5:10). I demonstrated that they were responsible for what I was dealing with in that room (Luke 7:35).

I also reproved the police for what they were tolerating. Keep in mind that we discovered during the event that the police were ordered by the local prosecutor to stand down and were told to let the protesters do what they wanted. Despite being given such orders, these men swore to uphold the law and they were obligated to deal with the taking place at the event.

Finally, I spoke to the state-controlled media, who for seven weeks were polarizing and demonizing an individual because of his views of morality, which are protected under the First Amendment. Of course, for the most part, they were not providing the public with the truth, but were engaging in open attacks upon Brian Klawiter. These useful idiots have a 21% approval rating, yet people were buying into their lies about Brian and about the speakers.

One propagandist even stated that I recently wrote if “gay marriage is implemented then there will be a second holocaust.” I never wrote those things. I called him out asking, “Where is Andrew Krietz?” (Grand Rapids M-Live group’s “Useful idiot”) I asked several times and was told later by a reporter that he had fled out the back door. Following my exposure of his crime of libel, it was reported that he came back in, at a distance, at the end of the event. So much for his credibility.

Adults at the event, who claimed to be teachers, were escorting college students (paid protesters). We discovered they were not teachers at all. Instead, they were provocateurs, who when confronted, left their post which soon resulted in those college students acting rationally.

So who is behind all of this? 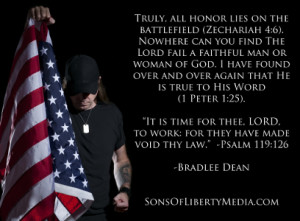 It is those who tolerate lawlessness (Matthew 24:12).

Where is the resolve in these kinds of circumstances? The resolve is in those who are willing to take it to the enemy; for the gates of hell shall not prevail against the church (Matthew 16:18).

Truly, all honor lies on the battlefield (Zechariah 4:6). Nowhere can you find The Lord fail a faithful man or woman of God. I have found over and over again that He is true to His Word (1 Peter 1:25).

America, God is at work. Yet, He does not always work independently of His creation (Jeremiah 5:1).

There is no excuse as to why we are in the national predicament that we are. America has failed God. God has not failed America.

In the end, the event was a narrative, played out by the state-controlled media, along with two provocateurs stirring this all up. How shameful (Jeremiah 3:3).

However, because we took it back and attacked with the truth, we won the day and their narrative is backfiring. And thanks to Liberty Counsel, we just set another national precedent on top of them, which is meant to prevail against lawlessness (Isaiah 51:4).

To Spit Against Heaven