Is President Barack Obama clueless?  Does he have any inkling of the insidious nature of Iran, with which he just signed a nuclear weapons agreement, an agreement that endangers not only Israel, but also the survival of the United States?

Or is Barack Obama a collaborator?

In Part I of this inquiry, we shall examine the mentality of former Iranian President Mahmoud Ahmadinejad, a disciple of the Ayatollah Khomeini. For this purpose, I will first reproduce an article by Simon Barrett, Chairman of L.E.K. Australia, a major global strategy consulting firm with headquarters in London and Boston, MA.

“Ahmadinejad in His Own Words” by Simon Barrett 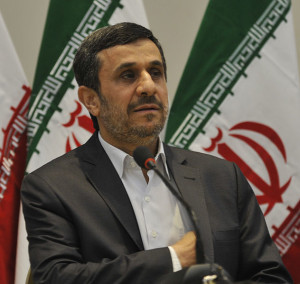 For information about Iran’s well-documented human rights abuses, its role as a major state sponsor of terrorism, and its defiant stance on the international community’s insistence that the nation suspend its uranium enrichment program, go towww.realite-eu.org.

Quoted below are several statements of Iran’s former President Mahmoud Ahmadinejad concerning religious extremism and martyrdom. [The sources are documented in the end-notes below this text]:

For documentation and more information, see the following:

End of Part I

The key word here is “former”. Ahmadinejad is no longer president of Iran, so any agreement has nothing to do with him or his policies. The agreement is with the Iranian government, not any one individual. This is particularly relevant with Iran, as power in the Iranian government is highly diffused between different agencies of government, and factions within those agencies, so the policies of any one president or ayatollah take a long time to filter down into real substantial policy actions.

Furthermore, Ahmadinejad was a populist, not a theocrat. He had little interest in religion and was always regarded as an outsider to the political and religious establishments. That doesn’t mean he was pro-western, as that is a huge over-simplification of Iranian politics – Ahmadinejad was distrustful of American power in the gulf, and of the theocratic faction in Iran as well. His position was that of Iranian popular nationalism, with enough religious flavoring thrown in to make it palatable enough to get his policies through parliament and the guardian council.

The agreement signed isn’t perfect, and that’s the nature of agreements. Both sides start of with their ideal – and totally opposite – positions, then barter their way down to something in the middle that both sides can live with for the sake of a quiet life. Israel wasn’t a party to the talks so they really can’t complain. If they had wanted their interests to be heard at the table, then they should have sat down and talked to the Iranians as well as brought their own stuff to trade, which they could have done, given have things to offer than Iran wants vis a vis nuclear security and Lebanon. Crying that people ignored your concerns is just pathetic when you spent the last two years sulking in the corner and refusing to talk to anyone.

Ahmadinejad’s pronouncements, and policies, were and are typical of those who lead Iran today. That’s what makes him still relevant.