“A general Dissolution of the Principles and Manners will more surely overthrow the Liberties of America than the whole Force of the Common Enemy.” -Samuel Adams

This past week has brought in a wave of purposed lies from this criminal administration only to establish that which is unconstitutional, as well as illegal. Obama’s spokesliar Josh Earnest erroneously claimed the “Rule of Law” in support of Rowan County Clerk Kim Davis being jailed for contempt by a Nazi-like judge appointed by George W. Bush.

“I will just say on principle that the success of our democracy depends on the rule of law and there is no public official that is above the law,” Earnest said. “Certainly, not the President of the United States. But neither is the Rowan County clerk. That’s a principle that is enshrined in our Constitution and in our democracy.”

This reminds me of this criminal in the people’s White House, who is continually inundating us with his lies and crimes, as well as misleading the American people by calling America’s form of government a democracy while the opposite is true.

Furthermore, Barry Soetoro, aka Barrack Hussein Obama, claim’s to be a constitutional scholar. He doesn’t even understand the oath which he is to uphold nor the basic foundations of America.

All one has to do is simply recite the pledge of allegiance to know how you are being lied to.

I pledge allegiance to the flag of the United States of America, and to the REPUBLIC for which it stands, ONE NATION UNDER GOD, indivisible, with LIBERTY and JUSTICE for all.

What is the difference between a democracy and a Constitutional Republic?

A democracy is nothing more than mob rule, where fifty-one percent of the people may take away the rights of the other forty-nine. -Thomas Jefferson

A democracy is based on what the majority of the people want. You hear it often portrayed as “The Will of the People.”

DEMOCRACY [Greek demos people, and kratein to possess, to govern], n. Government by the people; a form of government, in which the supreme power is lodged in the hands of the people collectively, or in which the people exercise the powers of legislation.

“A republic is based off an ‘Empire of Laws, and not of men.’” –John Adams

REPUB’LIC [Latin res publica, fr. res and publica public affairs], n. 1. A commonwealth; a state in which the exercise of the sovereign power is lodged in representatives elected by the people.

God gives rights to men, the powers of the government come from the people. (Exodus 18:21; Declaration of Independence)

The following quotes from our founding fathers warn of the fruit of a democracy:

Democracies have ever been spectacles of turbulence and contention; have ever been found incompatible with personal security, or the rights of property; and have, in general, been as short in their lives as they have been violent in their deaths. – James Madison

Remember, democracy never lasts long. It soon wastes, exhausts, and murders itself. There never was a democracy yet that did not commit suicide. – John Adams

The experience of all former ages had shown that of all human governments, democracy was the most unstable, fluctuating and short-lived. – John Quincy Adams

In democracy . . . there are commonly tumults and disorders. . . . Therefore a pure democracy is generally a very bad government. It is often the most tyrannical government on earth. – Noah Webster

It may generally be remarked that the more a government resembles a pure democracy the more they abound with disorder and confusion. – Zephaniah Swift, Author of America’s First Legal Text

On top of all of this, the devil Obama omits God, The Right Giver, out of the Declaration of Independence, which he has done on several occasions (Isaiah 14).

This is how there is a change from love that fulfills the law (Romans 13:8-13) to hate that fulfills lawlessness (Matthew 24:12). The prophet spoke of those who “call evil good, and good evil; that put darkness for light, and light for darkness…” (Isaiah 5:20). 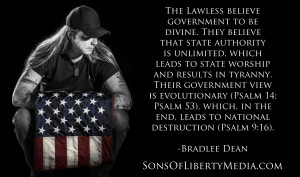 Is it any wonder the lawless believe they have privileges by the state to violate Gods moral Law when such lies are promoted?

It is because they believe government to be divine. They believe that state authority is unlimited, which leads to state worship and results in tyranny. Their government view is evolutionary (Psalm 14; Psalm 53), which, in the end, leads to national destruction (Psalm 9:16).

A democracy is a volcano which conceals the fiery materials of its own destruction. These will produce an eruption and carry desolation in their way.

The known propensity of a democracy is to licentiousness (excessive license) which the ambitious call, and ignorant believe to be liberty.

Those who know our proper foundations understand the state is divinely ordained, that state authority is limited, which leads to patriotism and results in a Republic because it is based on Creation.

Remember, America, the rights of man come not from the generosity of the state, but from the hand of God. –President John F. Kennedy

It is the duty and obligation of the American people to know the difference between what the devil’s minions want you to believe and the Truth.