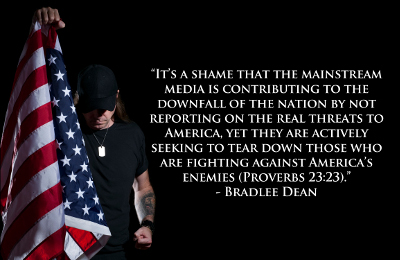 “The media is the most powerful entity on earth. They have the power to make the innocent guilty and to make the guilty look innocent, and that’s power; because they control the minds of the masses.” –Malcolm X

Most people already know that the state-controlled media is bought and paid for from the top to the bottom. For those that didn’t know, there are 6 corporations worldwide feeding the masses through their financed propaganda in an attempt to rearrange reality into a perceived reality they want you to believe in.

As a case in point, a top German Journalist and Editor, Dr. Udo Ulfkatte, has gone public with some shocking admissions on his exposé concerning the media worldwide. He basically admitted that the entire mainstream media is totally fake! Those are his words. He said he was paid and used to educate and lie to the public, as well as how the media is trying to bring war to America.

Dr. Ulfkatte also stated that the CIA supported him and informed him on how they get control over all of the major journalists.

We know our disinformation program is complete when everything the American people believe is false. –William Casey CIA director, 1981

No wonder why 67% of the American people do not trust the news media. There is little to no truth in these people.

The good news friends is that we still have Fox News, right? Wrong!

Alwaleed has stated, “A strong American government is not good for us.”

Fox has been used as a moderate for far too long. They have no absolutes. Therefore, there is no difference between them and what America complains about. Let me explain.

If Fox is not trying to sabotage a Republican debate by attacking the leading contender in an attempt to hand over the presidency to Hillary Clinton (Megyn Kelly-Donald Trump), it may well explain why Fox News is one of the top ten financial contributors to the Clinton Foundation.

This may also explain why Fox also put out an article on Sept 3, 2015 titled “Poll says Hillary and Trump are unpopular: why they could win anyway.” This article was posted during Trump’s highest polling numbers and Hillary was being exposed for another high crime against the American people. However, we know that Clinton’s Twitter account came out as 56% fake or inactive, as well as little to no support for her presidential run.

Keep in mind, Trump, love him or hate him, is gaining major favorable support nationally while Clinton is not in the minds of the American people as a credible candidate.

Also, 40 to 60% of all comments made by the network are completely contrived or blatantly false. 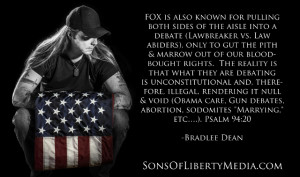 Fox is also known for pulling both sides of the aisle into a debate (Lawbreaker vs. Law abiders), only to gut the pith and marrow out of our blood-bought rights. The reality is that what they are debating is unconstitutional and, therefore, illegal, rendering it null and void (Obama care, Gun debates, abortion, homosexuals getting married, etc….). Psalm 94:20

There is no good government but what is republican…[T]he true idea of a republic is ‘an empire of laws, and not of men.’ That, as a republic is the best of governments, so that particular arrangement of the powers of society, or in other words, that form of government which is best contrived to secure an impartial and exact execution of the law, is the best of republics. (Article 4 Section 4 United States Constitution)

To further solidify my point, I end with a quote attributed to David Rockefeller, who allegedly said in 1991 in Baden, Germany:

We are grateful to the Washington Post, The New York Times, Time Magazine and other great publications whose directors have attended our meetings and respected their promises of discretion for almost forty years. It would have been impossible for us to develop our plan for the world if we had been subjected to the lights of publicity during those years. But, the world is now more sophisticated and prepared to march towards a world government. The supranational sovereignty of an intellectual elite and world bankers is surely preferable to the national auto-determination practiced in past centuries.”

America, you may choose to look the other way, but you can never again say you didn’t know.

Consider the Source | The Antipas Chronicles