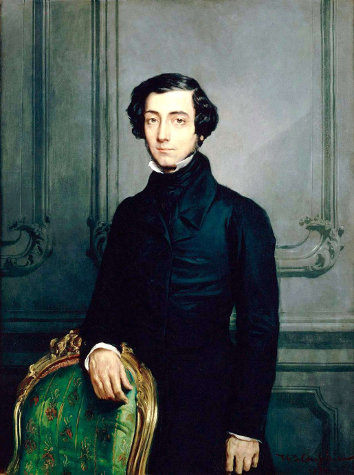 To understand why democracy today is boring and decadent one can hardly do better than consult Alexis de Tocqueville. His classic, Democracy in America, is more relevant today than when it was written in the 1830s. My colleague Professor Will Morrisey of Hillsdale College elaborated on this subject in relation to American foreign policy. Here I will focus on one of Tocqueville’s most important insights, rendered all the relevant today because of the nihilism and atheism propagated by American universities. 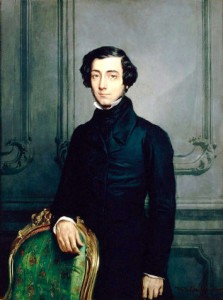 In Tocqueville’s time, American universities were church-affiliated, and seriously so.  The intellectual class, if not entirely religious, was noticeably shaped by religion; even men like Jefferson retained many of the sturdier qualities that religion fosters: discipline, perseverance, wholehearted dedication to a cause. From Puritanism on, Americans had found in their religions means of both spiritual and temporal satisfaction.  By “giving men a general habit of conducting themselves with a view to eternity, religions reveal “the great secret of success” in this world; they teach men not to “turn from day to day to chase some novel object or desire,” but to “have settled designs which they are never weary of pursuing.  The social stability provided by the belief in eternity served as ballast for a ship that otherwise would have swayed uncontrollably in the unpredictable gusts of democratic opinion.”

For “no sooner do [men] despair of living forever, than they are disposed to act as if they were to exist for a single day.” He elaborates:

In skeptical ages it is always to be feared…that men may perpetually give way to their daily casual desires, and that, wholly renouncing whatever cannot be acquired without protracted effort, they may establish nothing great, permanent, and calm….In these countries in which, unhappily, irreligion and democracy coexist, philosophers and those in power ought to be always striving to place the objects of human actions for beyond men’s immediate range.

As religious faith declined among the intellectuals in the latter half of the nineteenth century and was replaced by faith in science and social progress, institutional Christianity metamorphosed.  It did not disappear but became secularized, materialist, with a worldly compassion and a worldly paradise replacing charitas and Heaven.  In the domain of foreign policy, the apolitical character of Christianity – “resist not evil,” “turn the other cheek,” “love thine enemy” – has reinforced the liberal democratic tendency toward pacifism and appeasement evident in the Vietnam anti-war movement: “make love, not war.” Today, “make love, not war” animates President Obama’s “outreach” policy: Islamic dictatorships have taken the place of the Soviet Union.

The decadence underlying this liberalism was being prepared long before Vietnam. The most important of the intellectual preparations for this decadence was the university-bred doctrine of moral relativism, to which we now turn.

Tocqueville comes very close to anticipating the phenomenon of moral relativism.  This may be seen by recalling his description of the “philosophical method” of Americans.  He notes that, under conditions of equality, not only does each individual seek the reason of things in himself alone, but equality tends to invade the intellect such that the individual becomes the “source of truth.” Relativism reflects egalitarianism, for it consists in believing that there are no objective standards for determining whether the way of life of one individual, group, or nation is superior to that of another.  To admire a Socrates or a Yasser Arafat, to condemn PLO terrorists or to call them “freedom fighters”; to prefer liberal America to the Mullocracy of Iran—all these so-called value-judgments are deemed “subjective.”  Relativism thus regards all moral principles (which it also calls “values” as opposed to “facts”) as theoretically equal.

We are students of politics; we write this book in that capacity.  And here we are concerned not with vices and virtues but with strengths and weakness.  Moral judgments have been passed often enough and with predictable results—on both sides of the Iron Curtain.

Such talk obscures the fact that vices and virtues are strength and weakness, depended upon and routinely exploited by every politician every, person, who ever lived.

It also reflects the moral relativism of numerous contemporary intellectuals, “left” and “right,” who imagine an “end of ideology” in what Brzezinski later calls the “technetronic era.”  According to his teaching, we must abandon our prejudices about individual, group, or national superiority and enter a period of universal toleration and—no surprise—egalitarianism. Welcome to Barack Obama.

It needs to be borne in mind that political scientists tainted by relativism influence statesmen and a nation’s foreign policy.  It may appear paradoxical that Brzezinski, a moral relativist, was the National Security Adviser of President Jimmy Carter, a born-again Christian.  However, the above mentioned Christian precepts, “resist not evil,” “turn the other cheek,” and “love thine enemy,” readily lend themselves to the non-judgmental tendency of moral relativism.

Huntington, who also served on the National Security Council, provides a more revealing case study of the influence of democracy on the intellect of Americans.  In his 2004 book, Who Are We? in which Huntington provides a comprehensive historical analysis of “The Challenges to America’s National Identity,” the doctrine and corrosive influence of moral relativism is conspicuous by its absence!

The Loss of National Identity

Insofar as many Americans ask, “Who Are We?” they betray a loss of national identity so evident in President Barack Obama, a self-professed multicultural moral relativist.

Tocqueville anticipated this development.  So long as a strong religious or even secular faith inspires a people, democracy thrives; when the faith declines to the level it reaches in Barack Obama, discipline and spiritedness are going to be difficult to arouse.  The keepers of a lukewarm faith cannot appeal to positive belief alone, whether it be the aristocratic faith in his leader, the religious man’s faith in his God, or the democrat’s faith in his country; they must, rather, urge us on by means of the dispiriting lure of moral relativism.  We are to pursue, with good will toward friends and adversaries alike, a morally neutral or non-ideological foreign policy, a policy which, by definition, can only be motivated by material interests.

As Tocqueville would have understood, in America, appeals to “even-handedness,” a euphemism for moral equivalence or relativism, almost always serve the speaker’s desire for comfortable self-preservation. This banality underlies the Middle East foreign policy of the Obama administration vis-à-vis Israel and the Palestinian Authority.

Moreover, just as the U.S. refrained from launching a “first strike” against the USSR, so it will not launch an attack against Iran’s far less formidable nuclear development facilities.  However, just as the U.S. would have wiped out the Soviet Union in retaliation for having been attacked by that communist tyranny, so the U.S. will have no choice but to take that course of action if attacked again by Communism’s religious counterpart, Islam.  The aim of the latter was recently stated on Palestinian TV:

If attacked by weapons of mass destruction (WMD), the present writer would like to believe that the U.S. will not repeat the mistake the Bush administration made after 9/11, by waiting three weeks to attack the Taliban (a delay that allowed al-Qaeda to “disappear”).  The retaliation – or so one may speculate – will be quick, geographically indiscriminate, and awesome.

Tocqueville would not have been surprised by the mistakes the U.S. made before 9/11 and which led to the indiscriminate slaughter of 3,000 innocents.  He saw that, given the democratic love of physical gratification, “There are two things that a democratic people will always find very difficult, to begin a war and to end it.”

Consider only the years of the Clinton presidency.  Muslim terrorists truck-bombed the World Trade Center in 1993, killing six people and wounding over a thousand. In 1995 the FBI foiled an Islamic plot to blow up landmarks in the New York City area, including the Lincoln and Holland Tunnels and the George Washington Bridge.  In 1996, terrorists attacked the Khobar Towers in Saudi Arabia, killing 19 U.S military personnel and wounding hundreds.  In 1998, al Qaeda operatives bombed the U.S. Embassies in Kenya and Tanzania, in nearly simultaneous attacks, killing 12 Americans, more than 200 Kenyans and Tanzanians, and wounding over 4,000.  On October 12, 2000, terrorists conducted a suicide attack against the U.S.S. Cole, an American naval warship stationed in the port of Aden, Yemen, killing 17 sailors and wounding 39 more. Apart from firing a few multi-million dollar cruise missiles on worthless targets, it was business as usual in the world’s number one superpower – a democracy in which considerations of national honor (to say nothing of justice) had long ago succumbed to the all-too-human desire for commodious living. Is it any wonder that liberal democracy is boring as well as decadent?

Nevertheless, perhaps the idea of “dismantling” Islam, as I proposed in a recent article, may be of some interest to future historians.☼

Regime of the parties