If you would know who controls you see who you may not criticize.

It has been a week of weeks concerning the assaults on the American people coming from this administration and their communist allies within and without. They are becoming more emboldened, ruthless and obvious as to who is responsible for the crimes committed against the American people, especially those involving the sodomite community. Yet, you are told to believe that the homosexual manifesto is just satire. Let me make my point.

Barack Hussein Obama the “First Gay President” and his controllers appoint 225 radical lesbians, homosexuals, and transgender to governmental positions only to be used as a political battering ram to upend American sovereignty. Yet, the American people were told that Gay Manifesto was just satire.

On October 28, 2009, Barrack Hussein Obama signed into law (It is not law) the Matthew Shepard hate crime legislation, which was based on a lie. America was told that Shepard was a victim of a hate crime (All crime is motivated by hate). The bill was named after Shepard and James Byrd Jr. Through fabrication and omitted facts, the sodomites took advantage of the situation and attempted to equate their sin to the color of the black man’s skin.

Yet, we can highlight a plethora of self-inflicted crimes by these homosexuals who attempt to lay the blame for their crimes upon the innocent. However, the American people were told that Gay Manifesto was just a satire.

On May 10, 2010, Barrack Hussein Obama further assaults the American people by adding Elena Kagan, a woman who never judged a case a day in her life, to the Supreme Court. Elena is responsible for attempting to radicalize Harvard by “queerifying” the institution. 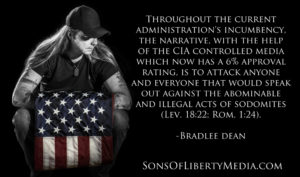 Then, on September 20, 2011, the administration removes “Don’t Ask Don’t Tell” so that the United States military will have to accept sodomites to serve openly in the military. Of course, this is only to weaken our defenses.

Throughout the current administration’s incumbency, the narrative, with the help of the CIA controlled media which now has a 6% approval rating, is to attack anyone and everyone that would speak out against the abominable and illegal acts of sodomites (Lev. 18:22; Rom. 1:24).

Again, the American people were told that Gay Manifesto was just satire.

Remember, they were doing all of this while tearing away at the Defense of Marriage Act by declaring Section 3 of DOMA unconstitutional in 2013.

Now to the children…

Remember ICE investigation at the Pentagon, which exposed over 5,000 employees downloading child pornography? Instead of the guilty being prosecuted for their felony offenses, the DOJ, under Eric Holder, conveniently stated they didn’t have enough manpower to bring prosecutions.

This leads me to Sgt. 1st Class Charles Martland, a Green Beret, who learned from a 12-year-old Afghan boy’s mother that an Afghan police commander had chained her son to his bed to repeatedly abuse him. Martland intervened and because he protected the child and his mother against an admitted rapist, Sgt. Martland was ordered involuntarily discharged from the military.

Just last week, it was uncoverd that former Speaker of the House Dennis Hastert molested 4 boys while he was a high school wrestling coach, but he won’t be charged.

But again, you are told to believe that the Gay Manifesto is only a satire.

Just so you understand where this is going, remember that Obama appointed Kevin Jennings as his safe school czar. Kevin wrote a forward to a book called “Queering the Elementary.” Kevin’s icon was none other than Harry Hay from the North American Man Boy Love Association (NAMBLA), where the motto is “Sex before eight before it is too late.”

Just a satire though, America!

Now, we see that this criminal in the people’s house threatens the state of North Carolina to withhold billions over a bathroom privacy act. Where are those billions come from America?

This is not American government friends, this is criminal! This is opening up the innocent to the abominable in every way. But again, it is only a satire, right?

It was reported that Bruce Springsteen was going to cancel concerts in North Carolina along with Bryan Adams and Pearl Jam.

Apparently, there was a black out when these immoral agents made their decision to cancel. Chad Severance is leading the charge. Chad Sevearance is a convicted sex offender.

In 1998, Sevearance worked as a youth minister and in that capacity allegedly lured younger men to his apartment to spend the night where Severance showed them pornography and tried to talk them into sex. One boy testified that he woke up to find Severance “fondling him.” Severance was convicted on one charge of sexual molestation of a minor.

As a result of his 2000 conviction, Sevearance must register with the police on a regular basis for a minimum of ten years.

Barney Frank, former member of Congress and known homosexual pedophile, said concerning the sodomite communities “For those that are worried about the radical homosexual agenda, let me put them on notice, 2 down, two to go!” (Jude 1:12-13)

Nothing to worry about though America, it is only satire!