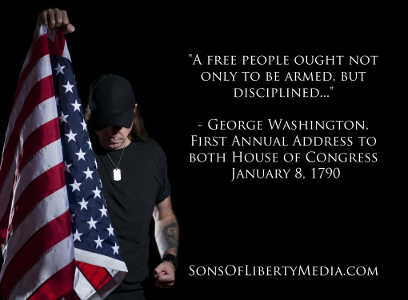 You don’t need 30 rounds to hunt! But the 2nd Amendment was not written in case deer turn against us. And on June 18th 2016, Barrack Hussein Obama once again proclaimed he would usurp the United States Constitution (1,180 transgressions to date) by pulling out of thin air another illegal and unconstitutional Executive Order in an attempt to further restrict Americans’ (God given) right to bear arms.

The Huffington Post Blogger’s Club feels that things are getting a little too close for their sinful comforts when it reported that the timing of the Orlando attack, combined with the demographic of the alleged victims,the demographic of the alleged gunman, and all the DC theatrics since the shooting,dovetail too well with the domestic and geopolitical agendas in Washington.

In fact, the group finds the timing of the Orlando shooting so suspect, that they’re offering $25,000 to anyone with substantial proof it was a false flag operation.

They say the Orlando shooting is simply perfect for at least six top priorities of the Obama regime:

This is all coming from the administration that arms “terrorists” to do their bidding for them to pull down and overthrow governments internationally.

Obama and his minions are the same people who are attempting to “brain wash” Americans through their use of lies and propaganda.

The true story of the Second Amendment

To counter the actions of this present day tyrant-dictator, let’s counter the lawlessness and misunderstandings as to why we, the militia, are an armed people. By the way, it has nothing to do with deer.

A well regulated Militia, being necessary to the security of a free State, the right of the people to keep and bear Arms, shall not be infringed. – Amendment 2 of the Bill of Rights

A free people ought not only to be armed, but disciplined… – George Washington, First Annual Address, to both House of Congress, January 8, 1790

What, Sir, is the use of a militia? It is to prevent the establishment of a standing army, the bane of liberty …. Whenever Governments mean to invade the rights and liberties of the people, they always attempt to destroy the militia, in order to raise an army upon their ruins. – Rep. Elbridge Gerry of Massachusetts,I Annals of Congress 750, August 17, 1789

The right of the people to keep and bear arms shall not be infringed. A well regulated militia, composed of the body of the people, trained to arms, is the best and most natural defense of a free country.
– James Madison,I Annals of Congress 434, June 8, 1789

A militia when properly formed are in fact the people themselves… and include, according to the past and general usage of the states, all men capable of bearing arms…To preserve liberty, it is essential that the whole body of the people always possess arms, and be taught alike, especially when young, how to use them.
– Richard Henry Lee,Federal Farmer No. 18, January 25, 1788

These are the same men that continuously warned their posterity to:

Guard with jealous attention the public liberty. Suspect everyone who approaches that jewel. Unfortunately, nothing will preserve it but downright force. Whenever you give up that force, you are ruined…. The great object is that every man be armed. Everyone who is able might have a gun. – Patrick Henry,Speech to the Virginia Ratifying Convention, June 5, 1778

When a strong man armed keepeth his palace, his goods are in peace. – Luke 11:21

Finally, President Thomas Jefferson, in a letter to James Madison, the 4th President, on December 20, 1987 said,

What country can preserve its liberties if their rulers are not warned from time to time that their people preserve the spirit of resistance. Let them take arms.