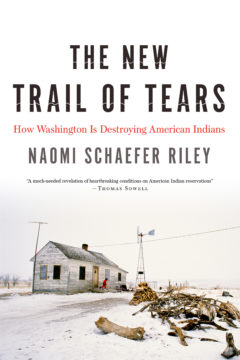 In 1830, Congress passed, and President Andrew Jackson signed, the Indian Removal Act. Over the next several years, Andrew Jackson forcibly removed the Cherokee and other nations from the southeastern United States to lands further west. To this day the Indians (or Beringians as some call themselves) call this removal the Trail of Tears. (The Cherokee remember this with bitter irony. After all, Cherokees saved Andrew Jackson’s life and command at Horseshoe Bend during the War of 1812.)

Today, Naomi Schaefer Riley tells us, the federal government wrongs the Indians further. Her latest book, The New Trail of Tears, does not speak of removals. But it speaks of an almost deliberate ploy to keep the Indian low. Yet not only should the Indian take warning from this book. Ms. Riley sounds a warning for any social group whom politicians tempt with “free stuff.” Her warning: don’t take it.

Three lanes in the new Trail of Tears

How does the federal government keep the Indian down? Ms. Riley describes three “lanes” in the new Trail of Tears. 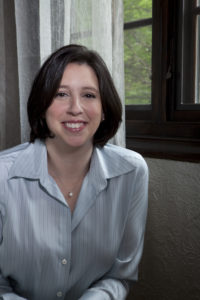 First, Washington colludes with shortsighted Tribal Councils to run a stultifying economy on the reservations. The Bureau of Indian Affairs speaks often about “native rights.” But they describe tribal rights. No one on the reservation may hold land “in fee simple,” that is, with private title. Instead, the government holds it in trust for the whole tribe. Any student of American history should know how private property founds a thriving economy. After all, Governor William Bradford of the original Plymouth colony used private property to save his colony. One winter of communal living killed half the colonists. When Bradford gave the survivors private property, they thrived.

The BIA never learned that lesson. But they also distort history. As Riley shows, Indians did respect private property. The original nations did not lead strictly nomadic lives. Of course, many leftists insist the Indians understood one could not buy or sell land as a commodity. They either don’t understand how the Indians really led their lives, or they flat-out lie. They would substitute their ideals of communal living for real history.

Along the second lane, Indians on reservations today do not get good educations. Blame the first whites who promised education for some of this. They wanted, not to educate, but to indoctrinate. The first Indian schools forbade students to speak their original languages or learn about their own history. And modern Indians remember that travesty of education. Today, when some want to offer them a real education, all too many Indians don’t trust them. They especially don’t trust people from “outside.”

The Indians have more trouble than this. Teachers often accept wrong answers as correct. Maybe they think they are doing the children a favor, by not hurting their feelings. But they do their pupils no good by offering those kinds of favors.

No respect for individual rights

Along the third, most dangerous, lane, neither government nor Tribal Council respects the rights of individuals. Everyone hears of resentment against the owners of sports teams with Indian mascots: Braves, Redskins, Seminoles, Chiefs, and so on. But what concern do they show for a single person after a criminal act against that person. Usually that concern depends entirely on the race of the one doing the deed. So an Indian can get away with rape or even murder against a fellow Indian. What can one call this, but a travesty of justice?

Indians are Americans, too!

Riley ends The New Trail of Tears with a ringing call: recognize Indians as fellow Americans! Let them have private property, let them get good education. Most of all, enforce the law the same for everyone, on or off the reservation. In fact she ends as she began: stop throwing money at the problem and those who suffer from it. The government throws money enough at the Indians. But today more of them know they don’t need that. They need the same rights to dignity, and chances to thrive, their fellow Americans have. That, more than money or even territory, will serve them properly.

I read the original book and “Bury My Heart at Wounded Knee. I will have to read this as well.

Had no idea. Sounds like decades of former Administrations and apathetic citizens led to the mess we’re in. So sad.