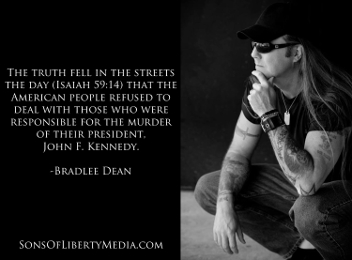 “I will splinter the CIA into a thousand pieces and scatter it into the wind!” So said John F. Kennedy.

Why was John F. Kennedy so adamant about abolishing the Central Intelligence Agency?

History shows that shortly after he made this statement, he was assassinated on the streets of Dallas, Texas on November 22, 1963.

Most Americans are also aware that after the assassination President Johnson reversed President Kennedy’s orders on Vietnam while conveniently appointing former CIA director Allen Dulles, who was fired by President John F. Kennedy for lying and manipulating when it came to the “Bay of Pigs,” as the fox in the chicken coop to the “Warren Commission” to investigate John F. Kennedy’s assassination (Jeremiah 11:9).

The rest is history. The truth fell in the streets the day (Isaiah 59:14) that the American people refused to deal with those who were responsible for the murder of their president.

While the truth was not acted upon that day, it did not fall dead. It has an affinity with the soul of man. The seed, however broadcast, will catch somewhere and produce a hundred fold, and it has.

What the CIA really does

One has to ask, what is the function of the CIA? Well, look it up.

CIA’s primary mission is to collect, analyze, evaluate, and disseminate foreign intelligence to assist the President and senior US government policymakers in making decisions relating to national security.

If you believe this, then you deserve what you have got coming.

What they say that they do and what they actually are doing are two different stories. The fruit of the CIA has been war, world destabilization, media propaganda, murder, bribery, etc. … Listen to former CIA agent John Stockwell.

Of course, they have been in cahoots with the military industrial complex, which President Eisenhower warned Americans about back in January 17, 1961.

The CIA has become a propaganda outlet.

We can see what former CIA director William Casey said when reinforcing what John Stockwell stated,

We’ll know our disinformation program is complete when everything the American people believe is false. – William Casey, CIA Director, 1981.

Disinformation is exactly what they have been spewing out of the CIA for a long, long time, not only in our country, but in other countries as well.

Dr. Udo Ulfkotte came out in 2016 exposing the CIA by stating the following:

Is the CIA alive and well concerning their crimes?

On February 1, 2017, the CIA popped its ugly head up once again. This time they were exposed for fake news about an assassination attempt on the Syrian leader, Bashar Assad.

When are the American people going to hold accountable not only corrupt politicians who are using the media as a cover for their crimes, but also those who are behind the crimes? (Deuteronomy 4:1)

Remember that Adolf Hitler’s third Reich was “made on propaganda,” according to Joseph Goebbels.

Who does propaganda work best on? The least intelligent (Hosea 4:6) said none other than the devil incarnate, Adolph Hitler.

All propaganda has to be popular and has to accommodate itself to the comprehension of the least intelligent of those whom it seeks to reach.

Until the American people understand what they are allowing through the likes of the CIA and other bureaucracies, nothing will change.

I never would have agreed to the formulation of the Central Intelligence Agency back in forty-seven, if I had known it would become the American Gestapo. – President Harry Truman.

America, it would be wisdom on our part to finish what President Kennedy intended to do with the CIA.