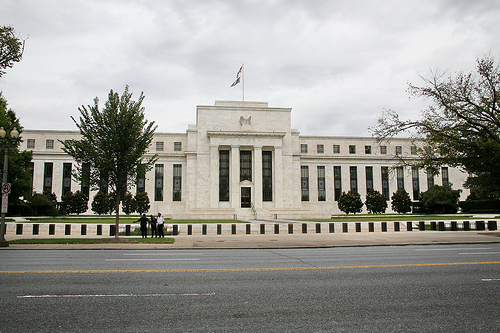 The Humanitarian Hoax is a deliberate and deceitful tactic of presenting a destructive policy as altruistic. The humanitarian huckster presents himself as a compassionate advocate when in fact he is the disguised enemy. Herewith a prize example: the Federal Reserve System.

The Federal Reserve is extra-constitutional

The Federal Reserve Act that created the Federal Reserve System (Fed) was passed in Congress on December 22, 1913 and signed into law by President Woodrow Wilson the next day. Barnewall describes the dramatic effects of its passage.

The Act transferred the right to print currency from the United States Congress to an independent and privately-owned entity calling itself a bank but which is not a bank and changing the Constitution which cannot be changed without Amending it. The Fed is somewhat federal in form, but is very privately owned and operated. President Wilson lived to regret signing The Federal Reserve Act and on his deathbed is quoted as saying:

“I am a most unhappy man. I have unwittingly ruined my country. A great industrial nation is controlled by its system of credit. Our system of credit is concentrated. The growth of the nation, therefore, and all our activities are in the hands of a few men.”

So, who are these men and why was President Wilson so remorseful about signing the Federal Reserve Act? And why is the Federal Reserve System so disingenuously named that the average citizen assumes it is a banking institution and part of the federal government?

Sometimes it is necessary to look back to understand the present and anticipate the future.

Banking in the world has a long history that began with merchant trading. People living in small isolated agricultural communities exchanged pigs for goats or wheat for milk and personal bartering among members of the community was enough to satisfy their survival needs – there was no need for currency or banking. As populations grew and trade between communities began, currency was introduced to make commerce more efficient. Currency was assigned a monetary value and buying and selling with money replaced bartering as the preferred form of commerce.

Determining the value of currency and the relative value of the goats, pigs, wheat, and milk being bought and sold was the beginning of banking. Currency use requires that people trust the banknotes and coins to represent an actual and real valued commodity. Gold was chosen as the standard that backed the currency and banks became repositories for both. Today we use fiat currency – money – as the medium of exchange and it is the taxpayers’ labor that backs it. WHAT?

Think about it. As long as the Federal government can tax its citizen labor force and confiscate their money to pay its debts it is the taxpayers who are actually backing the currency. We the people are the 21st century gold standard!

Banking is and always has been a for-profit business. The Federal Reserve Bank is no exception.

Prior to 1913 there were two central banks in the United States – both non-governmental entities. The First Bank of the United States (1791-1811) was chartered by the First Congress in 1790 and modeled after the Bank of England. Thomas Jefferson opposed the First Bank as an engine for speculation, financial manipulation, and corruption. When its 20 year charter expired it was not renewed.

Its successor bank, the Second Bank of the United States (1816-1836) was also a private bank with public duties and Andrew Jackson, like Thomas Jefferson, opposed the Second Bank as an engine of corruption. Jackson, who became president in 1828, was unable to get the bank dissolved but refused to renew its charter. President Jackson required all Federal land payments be made in gold or silver which produced the Panic of 1837. Runs on the banks, bank failures, and economic depression followed. The panic unleashed riots and domestic unrest which ultimately resulted in more state policing and more professional police forces.

The depression lasted five years until 1842 when the American economy began to rebound. In 1848 the California gold rush boosted the economy and by 1850 the US economy was booming again. Still, a national system was required to facilitate banking between regions that could avert another financial crisis.

A secret gathering took place on Jekyll Island November 1910 that laid the foundation for the Federal Reserve System in the United States. In attendance were:

• Abram Piatt Andrew, assistant secretary of the US Treasury and special assistant to the National Monetary commission

The clandestine 1910 Jekyll Island meeting produced draft legislation for the creation of the U.S. central bank and the Aldrich Plan was incorporated into the 1913 Federal Reserve Act.

Why is the Jekyll Island history so important? Why was the meeting so clandestine? Because the secret meeting at Jekyll Island failed to disclose its connections to the Bank of England.

J.P. Morgan & Co., and Kuhn, Loeb & Co. are the New York representatives of the Rothschilds Bank of England which means that the American Federal Reserve system is under the control of the Bank of England. The howling anti-Semitic memes that Jews control the banking are deliberate and misleading. The Federal Reserve Cartel, the Rothschild (Jewish), Rockefeller (Baptist), and Morgan (Episcopalian) families, are globalist, multireligious, and non-denominational. This is how it works.

How the Federal Reserve system works its evil

The Humanitarian Hoax of the Federal Reserve System is evident in its deliberately deceptive name. There is an enormous public misconception that the Federal Reserve System exists to protect and to serve America. It doesn’t. The Fed is a for-profit corporation of globalist world bankers seeking to internationalize the world for their own power and profit. The Fed is NOT an advocate of American sovereignty or America-first policies. The Fed is not altruistic – it is a hoax.

President Donald Trump is an American patriot committed to American sovereignty and is, therefore, an existential enemy of the Fed.

The globalist elite use our Federal Reserve System to manipulate world economies through their banking malfeasance. By raising interest rates, lowering interest rates, and printing money they control the availability of funds to their member banks that make loans to individuals and businesses. World banking is based on the US dollar, so Fed decisions in America affect inflation, employment, and production worldwide.

Conversely, the Fed can lower interest rates which floods the market with cheap money to artificially stimulate the economy – raising and lowering interest rates both have political consequences.

The power of the Federal Reserve System to collapse the American economy is held by a private corporation of international globalist bankers whose long-range political goals are to internationalize the world and establish a New World Order of one-government ruled by themselves of course.

Individuals who cannot repay their debts go bankrupt – so do countries.

The threat of globalism

The existential threat to American sovereignty is GLOBALISM. Globalism’s one-world government with one bank, one police force, one army, one flag, one language, one educational curriculum, one currency, one world with one ruling class – the globalist elite. Make no mistake – globalism is a catastrophic return to a master/slave feudal infrastructure.

Globalism is a non-denominational power grab by the globalist elite using anti-Semitism as a strategic sideshow. Sideshows are diverting incidents or issues designed to distract attention away from bigger issues. The Fed is manipulating the world economies while its globalist armies have boots on the ground indoctrinating America to accept collectivism and one-world government via the mainstream media, the educational system, Obama’s Resistance movement, and an unremitting assault on American traditional values.

If the Humanitarian Hoax of the Federal Reserve System continues, our Republic and the Constitutional freedoms our forefathers created will cease to exist. The globalist New World Order will be imposed by the ruling class of globalist elite. The useful idiots who support the globalist elite power grab, including the anti-Semitic memes that reinforce it, will succeed in killing America.

The globalist soldiers are the same useful idiots marching toward slavery in Goethe’s famous quote:

None are more hopelessly enslaved than those who falsely believe they are free as they are marched into servitude.

Copyright © by Linda Goudsmit. This article also appears on Pundicity.com and on the author’s website.

Perspective on Syria: The War, the Weapons, the Players, the Principles, the Christian Response