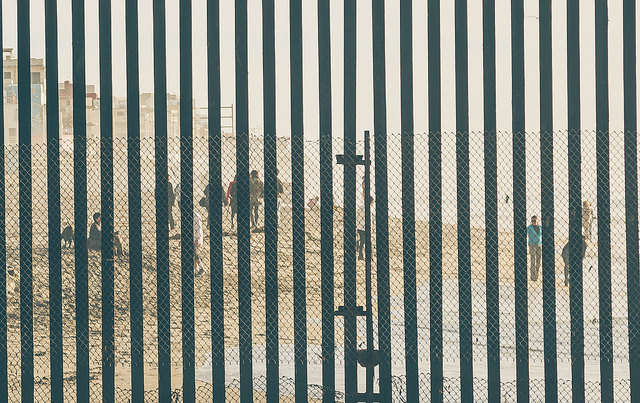 Let’s get serious. If hundreds of thousands of unvetted illegal aliens storming our southern border is not a national emergency what is?

Who benefits from this national emergency? The usual suspects…

Leftists don’t consider open borders a national emergency because they welcome illegal hordes into America to overwhelm the welfare system, collapse the economy, and vote illegally to insure one-party Democrat dominance. It is their preferred road to destroying America from within and imposing socialism.

Sharia compliant Muslims do not consider it a national emergency because hundreds of thousands of their sharia compliant Muslim Brotherhood brethren are pouring in determined to replace our Constitution with sharia law and establish an Islamic caliphate on United States soil.

Drug dealers do not consider open borders a national emergency because their product can be brought into the country easily without fear of incarceration.

Gang members do not consider open borders a national emergency because their murderous brethren can cross the border and be protected in sanctuary cities.

…and the less usual

Robert Mueller does not consider open borders a national emergency. He was FBI director for almost five years under Obama and oversaw the resettlement of 47,000 Somali refugees into Minnesota when vetting refugees from countries with hostile norms should have been a national priority.

Pecuniary benefit from this national emergency

Organizations in the resettlement industry like Church World Services, Catholic Charities, Lutheran Social Services, Hebrew Immigrant Aid Society, and the National Association of Evangelicals World Relief Corp that have been paid tens of millions of dollars in federal funds do not consider open borders a national emergency because refugee resettlement is big business.

The nine federal refugee contractors that are the core of the Refugee Council USA (RCUSA), the lobbying arm of the refugee industry, do not consider open borders a national emergency because the more refugees that are admitted the more money they make.

A lobbyist and his targets

The Podesta Group’s proposal stated, “Our primary targets will be Republicans-and some key Democrats who work well across the aisle-who sit on committees of jurisdiction and whose responsibilities include refugee and asylum policies.”

The deadliest beneficiary from this national emergency: the UN and those behind it

The United Nations High Commissioner for Refugees (UNHCR) does not consider open borders a national emergency. In fact, the UNHCR is one of the loudest voices promoting mass immigration and colonization to erase America.

Globalists do not consider open borders a national emergency because their primary goal is the obliteration of national sovereignty and territorial boundaries everywhere in the world.

United States Senators swear an oath to support and defend the Constitution and are duty bound to secure our territorial borders. So, who are these politicians who have broken their promise to America and why have they refused to define the invasion on our southern border as a national emergency?

Every Democrat senator voted against President Trump’s declaration of a national emergency on the southern border. No surprise there.

12 Senate Republicans in name only (RINOs) voted against President Trump. You can call them yourself and ask them why.

…and why they would vote as they did

Any serious discussion about our southern border crisis has to acknowledge that a whopping 70% of Americans know that illegal immigration is a national emergency that threatens our national security and social stability. President Trump was elected to secure the southern border and build a wall. So, why would 59 senators sworn to support and defend the Constitution vote to nullify President Trump’s declaration of a national emergency?

To answer that question we must evaluate the ideological and financial goals of the senators who voted.

Corrupt politicians are easy to understand – like any whore their favors are paid for.

Ideological motivations are far more difficult and troubling to explore. Sadly, in contemporary America it is no longer realistic to assume that US Senators sworn to support and defend the Constitution and our representative democracy are ideologically dedicated to the Constitution and our representative democracy. This is no small thing considering the future of America will be determined by their votes.

Choose where you stand

Americanism is represented by President Trump and the 41 Senators who supported the President’s national emergency declaration. They are all dedicated to upholding the Constitution and preserving our representative democracy. They pledge allegiance to the flag of the United States of America and to the republic for which it stands.

The Leftist/Islamist/Globalist axis has common cause to dismantle the Constitution and destroy representative democracy in America. The 59 Senators who voted to nullify President Trump’s declaration of a national emergency voted against upholding the Constitution and preserving our representative democracy. Whether motivated by personal animus, money, Socialism, Islamism, or Globalism, they have all pledged their allegiance to the global flag of the United Nations and to the one world government for which it stands.

59 American senators pledging allegiance to the global flag of one world government is the national emergency. Americans must get serious about what constitutes a national emergency because the 2020 presidential election will determine which flag will be raised on inauguration day.

This article also appears on Pundicity.com. For other articles by this author, search the archives of CNAV or visit her Pundicity page.

President Trump has, of course, vetoed the bill to nullify his national emergency declaration.

Senator Rand Paul (R-Ky.) deserves special mention apart from the other eleven. He will no doubt tell anyone who asks, that he does not recognize Presidential authority, under the Constitution, to declare a national emergency. Perhaps he infers a special reserved-powers text from the specific grant to Congress to declare war. And that would be:

CNAV does not doubt his sincerity, but does question his judgment. First, the Constitution contains no such text. Second, any chief executive has the inherent power to respond at once to any acute or chronic border threat. Third, the abuse of the national emergency power by any predecessor of the President does not nullify the concept.

One last and most important point remains. If the President may not address this threat, and Congress will not, this allows a chronic invasion to proceed unchecked. And when such an invasion succeeds, such a “pure” or “puristic” interpretation of the Constitution will ill serve the people.

Featured image: “US – Mexico Border Fence” by Tony Webster is licensed under CC BY 2.0 CC BY 2.0

Did You Know That Your Government is Arming Agencies Like the IRS, DHS, VHA, OIG, SSA, NPS?

Constitution: who breached it first? | Conservative News and Views

[…] that CNAV said, in an appendix to this article, something similar to the first point Mr. Balogh raises here. The Constitution does not in fact […]

[…] regular readers of CNAV know, two contributors have already weighed in. Linda Goudsmit asked flatly who benefits from the untenable and intolerable situation at the border. Sandor Balogh asked a more […]