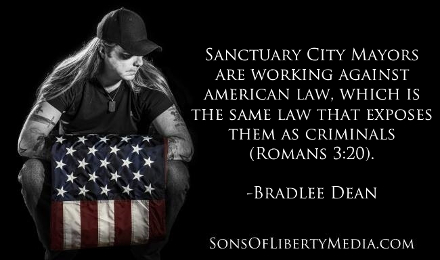 From the U.S. Constitution, Article 3, Section 3:

Treason against the United States shall consist only in levying war against them, or in adhering to their enemies, giving them aid and comfort.

Who is committing this treason

We have long known that it has been our said representatives (Luke 22:48) who have been committing the acts of treason against “We the People” by alluring illegals into America unconstitutionally by reallocating our tax dollars (2 Corinthians 3:10) to that of welfare-Sanctuary states.

This, of course, all comes to you under the guise of being the compassionate and caring, good and upright representatives (2 Corinthians 11:14). Nothing could be further from the truth.

Yet, while knowing this information, the American people act as if I were speaking about a foreign country. How is that working out for America? It is not (Amos 6:3)!

Now we have these same criminal politicians handing out licenses to illegals. The Hill reported:

A federal judge on Friday denied a challenge to a law that will allow New York to give driver’s licenses to undocumented immigrants. The law, which is set to go into effect next week, was facing its second challenge in court, the Rochester Democrat & Chronicle

U.S. District Judge Gary Sharpe ruled against Rensselaer County Clerk Frank Merola, saying he lacked the legal capacity to bring the lawsuit against the state over the new law.

Three other lawsuits are either pending or are on appeal, but NY state officials implemented it on Monday anyway because no court had issued a stay until the matter can be settled once and for all.

Is the judge committing treason?

I ask, since when did it become a judge’s duty to act out of his scope of authority in breaking the law? They are to sit during good behavior – fidelity to the Constitution and positive moral example (Article 3, Section 1, US Constitution).

They claim that a “law” gives them authority to overthrow the law. There is nothing that gives a judge, a politician, myself or any other in this country the right to do wrong in breaking the law (1 John 3:4).

Yet, we see this all day long coming from those who are to uphold the law (Amos 5:7).

Who is the real foreign attacker?

Haven’t Americans been told over the last 18 years by the mainstream media and politicians that we have been under attack by a foreign people? Yes we have!

Still, we find, over and over again, that we Americans are the very ones that are under attack by those to whom the mainstream media and politicians are now giving aid and comfort. That is the very definition treason in action.

You can keep kicking the can down the road and pretend, along with those who are selling you out on a daily basis, but as for me and my house, we will serve the Lord (Joshua 24:15) in dealing lawfully with the corrupt (Deuteronomy 4:6).

American law holds accountable not only them that claim to represent the people, who are in fact found to be committing treason against the people, but it also holds them accountable for the crimes of them that they have allured into America. Do for yourselves friends in holding up the Law, that which your said representatives will not in lawfully dealing with them.