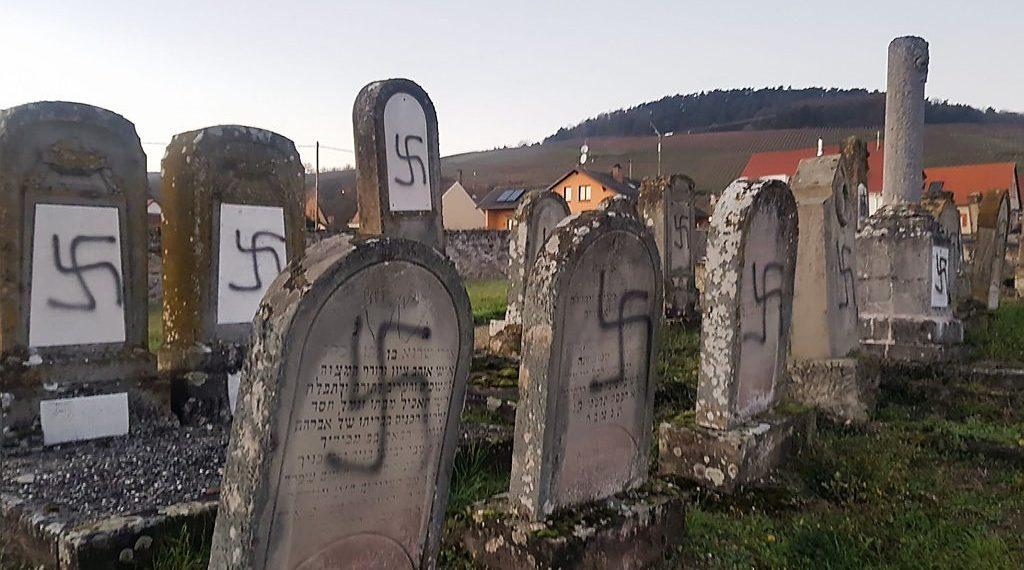 There is nothing new about the fanatical hatred of Jews that we see playing out in today’s world—literally a pandemic of anti-Semitism which echoes the fear and loathing that gave rise to the over-4,000-year history of the Inquisition, the Crusades, centuries of pogroms, the expulsion of Jews from country after country, and the Holocaust of the 20th century in which six-million Jews were savagely incinerated in the crematoria of Hitler’s Germany as the entire world—including U.S. President Franklin D. Roosevelt—looked on and did nothing!

Plus ça change and all that. But it’s not exactly true that things have remained the same. Today, the staggering power of technology makes the spread of Jew Hate all the more rapid, powerful and lethal.

In America, while blacks, Muslims, feminists, single mothers, immigrants, the global-warming fetishists, college graduates in debt for their exorbitant-but-meaningless “educations” and minorities of every stripe all bleat endlessly about being victims of this or that indignity, slight, “unfairness,” historical insult or crime, the Annual Report on Hate Crimes released by the Uniform Crime Reporting Program of the Federal Bureau of Investigation (FBI) show that, by far, it is the world’s tiny population of Jews—15 million in a world of nearly eight billion—who experience the most bias, hatred, assaults, blatant racism and hate crimes.

The ADL does not represent the Jew properly

I purposefully have not included the 2018 statistics from the global study on anti-Semitism by the Anti-Defamation League (ADL). Its director, Jonathan Greenblatt, worked for three far-left regimes—the Clinton administration, the Obama fiasco, and the George Soros-funded Aspen Institute. The founder and president of Americans for Peace & Tolerance, Dr. Charles Jacobs, accused Greenblatt of actively deceiving the American Jewish community about polling around the world that shows Islamic Jew hatred tops all others by a significantly wide margin. Says Dr. Jacobs:

Writer Isi Liebler elaborates at length on this premise, calling the ADL “a radical extension of the Democratic Party.” It refuses to fight the Boycott Divestment Sanctions (BDS) movement—which the American government declared anti-Semitic. Why? Because the ADL actively supports the Marxist anti-Semitic group Black Lives Matter. That group “incorporates anti-Israel passages in its platform and campaigns against anti-boycott legislation.”

But we don’t need skewed polls from the ADL to know what is happening to innocent Jews both here and abroad.

All you have to do is to read the daily exposés on Jew hatred around the world and in America that Pamela Geller has been documenting for almost 20 years at https://gellerreport.com. —definitely subscribe to this powerful site. Here, a small sample of typical headlines:

Jew hate in other venues:

Again, the headlines say it all:

The 40 worst colleges for Jewish students, according to the Algeimener.com online newspaper, include the following institutions. Here, among other colleges, rampant anti-Semitism flourishes—largely with impunity:

And the Universities of:

Who cares about the Jew on campus today?

According to author, editor and blogger Ruth S. King in Tenured Cowards,

The craven indifference of academic elites to the anti-Semitism that threatens Jewish students…is reminiscent of the purges of Jewish professors and students in the darkening days following Kristallnacht in November of 1938.

…worry about every minority right except for the right of Jews to live in safety everywhere, including on their own campuses. These cowards, particularly Jewish professors—who preen and strut in narcissistic self-hatred—have turned their back on Jews and Israel. They will be the first to be shocked when the rising tide of international anti-Semitism comes lapping at their heels, and their cronies and friends abandon them as they have abandoned principles and decency.

Among the vilest and most anti-Semitic groups at Harvard, Columbia and campuses across the country is Students for Justice in Palestine. By the way, will someone please tell me where on any map or Atlas in the entire world Palestine exists?

Yoo Hoo, Jewish alumni! Are you still donating to these schools? Paying them to “educate” your children. Well…stop! Let them know that their desire to extinguish Jews and annihilate Israel is the reason they will not receive another cent from you! Money Talks!

Clearly, the Arab strategy over the past many decades of spending multimillions of dollars endowing hundreds if not thousands of Chairs at colleges and universities throughout America—and especially in the D.C. area and other seats of powers, has given them total control over their preferred anti-Jewish and anti-Israel curricula, the better to contaminate the minds of students and influence America’s foreign policy vis-à-vis the historically anti-Semitic U.S. State Department.

For once the Jew has a friend at State

For the first time since Israel was founded in 1948, we have a State Department under Sec. of State Mike Pompeo that is not blatantly anti-Semitic! Moreover, President Trump has just issued an Executive Order that deems discrimination against Jews on U.S. campuses to be a violation of Title VI of the Civil Rights Act, and mandates that both colleges and universities lose federal funding if they fail to combat discrimination against Jewish students.

Of course, leftists everywhere—with Democrats leading the pack—object, which is absolutely no surprise as the Democrat Party is now the Official Party of Jew Hatred.

Do sane, moderate Democrats still exist? Yes they do, and to them I say Get Out Now! Leave your Party until it is purged of its racists, which you can help to accomplish at the ballot box.

Editor’s Note: As Representative Jeff Van Drew, D-N.J., is now doing. His motives might look different—the impeachment of President Donald J. Trump displeases him. But the travesty of justice in that context mirrors BDS and other Jew hate attitudes. – Ed.

According to author and columnist Ben Shapiro,

Media coverage of Israel has long been skewed in favor of Israel’s enemies. Jews…are targeted by those perceived as higher on the scale of privilege. It’s the reason Rev. Al Sharpton has a show on MSNBC, the reason Democratic politicians continue to play footsie with Louis Farrakhan, the reason the New York Times ignores hate crimes in its own city…

Social Media too—Facebook, Twitter, etc.—are hotbeds of Jew hating fanatics. Many use made-up names. Such cowards routinely engage in blood libels, vicious stereotypes, and lies and rants that I, personally, interpret as jealous screeds. These people must lie in bed at night obsessing about Jews, blaming their own lack of success on Jews, and projecting onto Jews their own worse character traits and failings.

As ace journalist Ashley Lutz scrupulously documented in a Business Insider report, in 1983 there were 50 media companies, but today only six organizations are responsible for 90 percent of all the “news” we read, watch and listen to! They include:

…and they are all globalists

Make no mistake: the CEOs of these multibillion-dollar businesses are all leftist globalists—not a conservative among them. The last was Rupert Murdoch (Fox, Wall St. Journal, NY Post, et al.). He gave control of his empire to his leftist sons Lachlan and James, hence the distinctly leftward tilt of Fox and the WSJ.

And shame on them for their positive coverage of raving anti-Semites like Cong. Ihlan Omar (D-Minn.), Cong. Rashida Tlaib (D-Mich.), Cong. Ayanna Pressley (D-Mass.), Cong. Alexandria Ocasio-Cortez (D-N.Y.), and all the others who avidly support both the BDS movement to destroy Israel economically and the denial of foreign aid to America’s staunchest ally in the Middle East.

Jew hate in the Democratic Party in the United States

As you read above, the Democrat Party has now—under the, ahem, leadership of Speaker of the House Nancy Pelosi (D-CA) and Senate Minority Leader Chuck Schumer (D-NY)—become the de facto party of Jew Hate, proven by the fact that with every vicious anti-Jewish, Israel-loathing statement of the above Democrats (Omar, Tlaib, Pressley, Ocasio-Cortez, et al), there has been NOT ONE WORD of objection, but rather Speaker Pelosi appointed Rep. Omar to the Foreign Affairs Committee, where she could learn every secret of the United States and pass it along to her like-minded Jew haters both here and abroad.

Given a choice between preserving their Jewish identity or embracing the ideology of the left, many Jews would prefer to be Democrats than Jews.

Writer Victor Rosenthal correctly posits that “the secret to educating anti-Semites so that they will stop being anti-Semites remains undiscovered.” He goes on to suggest that

Jews should secure their institutions and arm themselves to the extent that the law permits. Self-defense training should be part of all Jewish education. Nobody is respected for being a victim.

There are simply too many examples of the betrayal of Israel and Jews everywhere by the current anti-Semitic Democrats in the U.S. Congress to cite. Suffice a few more headlines:

No future for the Jew on the left

In my view, these despicable anti-Semites resemble the “just-following-orders” Germans who Daniel Goldhagen aptly described in the title of his 1996 book, Hitler’s Willing Executioners.

Today, the Jew haters in America—who get away with their murderous attacks under the cover of “free speech”—and the vast number of Muslim and Arab Jew haters who have predicated their entire lives on killing Jews and eliminating the State of Israel, now take their marching orders from Democrat leaders, leftwing newspapers, cowardly professors, and the megalomaniacal anti-Semitic billionaires who support them.

It is no wonder that the estimable Daniel Greenfield wrote: “There is no future for Jews on the left except as collaborators in anti-Semitism.”

What to do about Jew hate

It is clear that the Jewish organizations that once strongly advocated for Jewish issues and fought anti-Semitism aggressively no longer do so unless they involve politically correct issues that won’t inspire the vindictive wrath—and financial support—of Jewish Democrats. These include: the UJA-Federation, the Anti-Defamation League (ADL), the American Jewish Committee (AJC), the American Israel Public Affairs Committee (AIPAC), the Hillel chapters on college campuses and the Reform movement.

The good news is that, along with wide support from political conservatives, most Republicans, and the Christian Evangelical community, other Jewish advocacy organizations and publications are working tirelessly to combat the relentless assaults of the Jew- and Israel-haters among us.

Exodus of the Jew from the left

The Exodus Movement, founded by Elizabeth Pipko for “proud Jewish Americans who reject the hypocrisy, anti-Americanism, and anti-Semitism of the rising far-left.”

And now the White House is friendly to the Jew

Every day, if need be, don’t hesitate to contact the White House to express both positive and negative opinions of events that affect Jewish lives.

Identifying America’s Enemies: Judges & Politicians Handing Out Licenses to Illegals – This is Treason!

Birmingham School Confronts LGBT Indoctrination After Parents Pull Their Children – Guess Who the Parents Were?