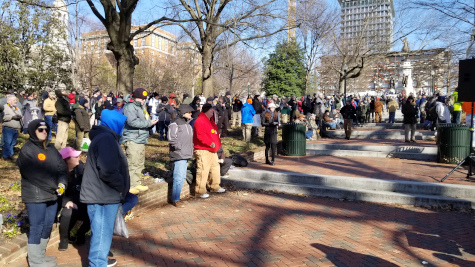 “Caesar had his Brutus, Charles I his Cromwell; And George III – [Treason! Cried the speaker] – may profit by their example. If this be treason, make the most of it.” So said Patrick Henry

The church and its Israelite forebears used protest often against tyrants

Anyone that has taken the time to read their Bibles understands that much of the history of the church is found in protesting tyrants. Remember, tyrants are them that would like to create a world without God’s rule. Therefore,

“Resistance to tyrants is obedience to God.” Thomas Jefferson

But take heed to yourselves: for they shall deliver you up to councils; and in the synagogues ye shall be beaten: and ye shall be brought before rulers and kings for my sake, for a testimony against them. -Mark 13:9

It is the duty of the Church to keep the commandments of the Lord. Nowhere can you find in Scripture where the Lord commanded His Church to disobey in obedience to tyranny, nowhere!

Magistrates are to be punishers of those who do evil, not good.

“Or unto governors, as unto them that are sent by him for the punishment of evildoers, and for the praise of them that do well.” – 1 Peter 2:14

For rulers are not a terror to good works, but to the evil. Wilt thou then not be afraid of the power? do that which is good, and thou shalt have praise of the same: For he is the minister of God to thee for good. But if thou do that which is evil, be afraid; for he beareth not the sword in vain: for he is the minister of God, a revenger to execute wrath upon him that doeth evil. Romans 13:3-4

With that now premised, let’s get to the present application.

Vaccine A bill in New Jersey that would’ve stripped parents and children of their right to informed consent by allowing them to object to mandatory vaccinations failed on Monday. Much to the chagrin of the tyrants who claim ownership over the bodies of others, the bill that would have eliminated religious exemptions to mandatory vaccinations failed to pass the New Jersey state legislature…

Threatening war against their own people in the USA?

The victory for medical freedom was an emotional and dramatic one as thousands of pro-freedom protesters showed up at the Statehouse to voice their concern over the government removing their right to informed consent. Naturally, those who want to remove your freedom of choice and sovereignty over your own body and force you to take an injection even if it goes against everything you believe in, were furious. They even vowed “war.” Yes, you heard that right, threatening war against those that disobey their unlawful edicts.

The success of removing this unconstitutional mandate of vaccinations from the roster and why, because of them that were faithful to God and man in protesting tyranny (Psalm 94:16).

Gun grabbers are all talk until people who actually support the right to keep and bear arms stand up for their rights. Even as Virginia Governor Ralph Northam engages in propaganda against the citizens of Virginia in declaring a state of emergency because “armed militia groups plan to storm the capitol,” which is pure nonsense, the fact is that those pawns in the legislature backed down from their tyrannical gun confiscation legislation when hundreds, if not thousands of Virginians showed up in protest.

The success of removing this unconstitutional mandate of gun confiscation from the roster and why, because of them that were faithful to God and man in protesting tyranny.1

Many in this country, after 14 years of their relentless attacks on those who refuse to bow to their abominable life choices (Leviticus 18:22, 20:13), are starting to now understand what it has been all about since the very beginning, namely the children (Luke 17:2). It went from them playing the victims, even going so far as to blame the innocent in self-inflicted hate crimes (Deuteronomy 19:19) to being found out concerning the children that they have violated.

This was all put to a stop because of one lone preachers refusal in standing back and watching a bunch of felons act as if they had the right to demoralize and molest the minds and bodies of America’s children (Luke 17:2). When the people protest they win.

A history of protest in the American church

The history of protest (Protestants) is found in the American Church, which understood that the gates of Hell shall not prevail against the God in whom they served (Matthew 16:15-20), and so it is today.

Look to the forefathers who threw off tyrants. Read the Declaration of Independence to understand American history.

It is time for Christian-Americans to also understand that it is not enough to merely protest these tyrants, but to also understand that legal consequence must follow protest: impeachment (Article 2, Section 4, US Constitution). These criminals are not the type that you can help-rehabilitate, they must be lawfully dealt with, and that without question.

Article 1, Section 3, Clause 7 states: “Judgment in Cases of Impeachment shall not extend further than to removal from Office, and disqualification to hold and enjoy any Office of honor, Trust or Profit under the United States: but the Party convicted shall nevertheless be liable and subject to Indictment, Trial, Judgment and Punishment, according to Law.”2

1 The Judiciary Committee of the Senate of Virginia did strike from the docket an explicit gun confiscation bill. But other, no less unconstitutional bills have moved forward. Sources close to the massive protest rally promise legal action to follow any enactment. That assumes any enforcement action can take place: over 100 counties and independent cities have declared themselves 2A sanctuary communities.

A small portion of the thousands who showed up on Richmond’s Capitol Square to protest gun control on MLK Day. CNAV was on the scene.

The Method to Their Madness

75 Years After Auschwitz And Not Much Learned