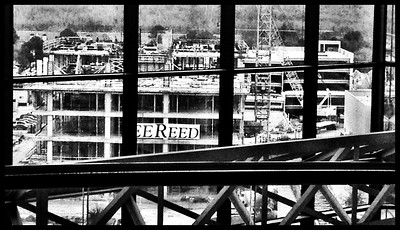 There are two kinds of people in this world – builders and destroyers. You know who you are.

Our forefathers were builders who rejected monarchy in favor of limited government and the challenge of self-rule. Our forefathers understood the difference between servitude and citizenship. They chose freedom and built a more perfect union – a government of the people, by the people, for the people. The building of the United States of America was the most successful experiment in individual freedom and prosperity the world has ever known.

…and the laws by which builders live

Commandments 1-4 codify rules for membership in the group, they are the unifying principle of monotheism. Monotheism is at the heart of the Ten Commandments and its moral laws. Freedom and independence require self-respect, self-control, and respect for others. It is a delicate balance that requires maturity and the ability to agree to disagree.

Commandments 5-10 codify the ethos of individualism and respect for others: “Do unto others as you would have them do unto you.” The Constitution and the Commandments define the balance between self and society, and between the individual and the group. There is no disagreement about the need for mutuality or respect for the individual.

The philosophy of destroyers: collectivism

The humanitarian hoax of collectivism is the destruction of the individual. Socialism is the destructive democrat party platform being marketed as altruism. Radical blue state Democrat leaders are telling the citizens of their states that anarchy, looting, robbery, rape, murder, and mayhem perpetrated by destroyers will bring equality and social justice. It is a lie. Anarchy precedes tyranny.

Builders or destroyers: the people’s choice

We still have the choice between builders and destroyers in November. We can choose between ordered liberty or the Seattle CHAZ—Capitol Hill Autonomous Zone that has become the country’s first No-Go zone.

The radical Democrat destroyers support anarchy and the defunding of police departments, but without law enforcement there is only anarchy. Ask yourselves, “Do you want to live in the anarchist country of CHAZ?”

CHAZ is the predicted escalation of radical Democrat sanctuary cities and sanctuary states that protect criminals at the expense of law-abiding citizens. In CHAZ the criminals have taken over the government. This is how violent revolutions begin. This is what the radical Democrat destroyers are offering you in November. Voter beware!

Law-abiding communities, black and white, are builders who want to live the American dream of freedom and equality rooted in American individualism articulated in the Constitution and the Ten Commandments. Law-abiding communities, black and white, reject the destroyers of the radical leftist Democrat party who foment racial divisiveness and religious divisiveness by embracing Antifa anarchists, Black Lives Matter supremacists, and Islamic sharia law supremacists who are all diametrically opposed to the Constitution and the Ten Commandments.

The Democrat hype of the coronavirus pandemic and their support of anarchist pandemonium are both tactical weapons in the radical leftist Democrat war of destruction against America and America-first President Donald J. Trump.

There are two kinds of people in this world – builders and destroyers. You know who you are.

The 2020 presidential election is a battle between builders and destroyers. The outcome will determine if the dreams of our forefathers for a more perfect union of citizenship and individualism prevail, or if the radical Democrat destroyers successfully surrender our country to collectivism and servitude.

Before you cast your vote in November, remember Communist China Premier Zhou Enlai’s dismissive comment, “One of the things about Americans is that they have absolutely no historical memory.” The radical leftist Democrat destroyers are counting on you to forget the millions of people killed in the name of collectivism.

Remember that every group is made of individuals. This means if you choose radical Democrat collectivism you are choosing to destroy your self.

Remember that the ruling elite always take care of the ruling elite. The radical Democrat political party does not represent individualism and American interests. The radical Democrat party leaders are lobbyists for their globalist financiers who fully intend to bring socialism to America in preparation for the internationalized new world order of their globalist bosses.

There are two kinds of people in this world – builders and destroyers. Be a builder and reject the destroyers in November.

A country unwilling to defend itself

Prayer wins – but how much? - Conservative News and Views

[…] values. This should surprise no one – because Bremerton is a suburb of Seattle, site of the “Capitol Hill Autonomous […]