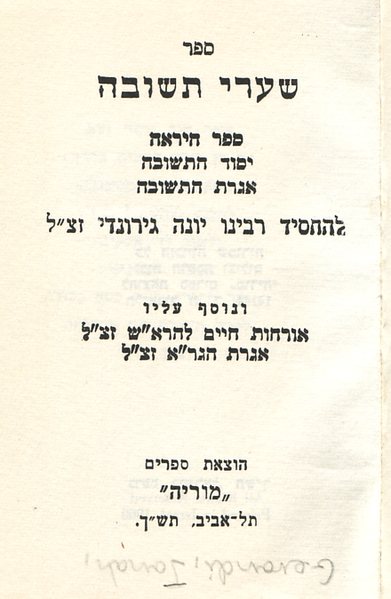 The Hebrew month of Elul has begun, and teshuva, return, repentance, is in the air. Elul is the penitential month in the Jewish calendar, before Rosh HaShanah and Yom Kippur. The third of Elul, was the Yahrtzeit1 of Rav Avraham Yitzhak HaKohen Kook, Chief Rabbi of Mandatory Palestine and the visionary High Priest of Israel’s Redemption. He returned his soul to his creator in 1935. Yet, his immortal words about teshuva and redemption ring on…

Teshuva comes from the longing of the entire universe to become better and more pure, stronger and more elevated than its current state. At the core of this drive is a life-force that triumphs over the limited, weak character of natural existence. The repentance of an individual, and certainly of the nation, draws its strength from this life-force, which flows unceasingly, at full strength.

Rav Kook expanded the concept of Teshuva well beyond the individual, encompassing the national and universal dimensions as well. Intertwined, throughout Rav Kook’s thought, are the concepts of teshuva, and the redemption of the nation of Israel.

When we forget the essence of our own soul … everything becomes confused and in doubt. The primary teshuva, that which immediately lights the darkness, is when a person returns to himself, to the root of his soul. Then he will immediately return to God, to the soul of all souls. …This happens within the individual Jew, the nation of Israel, all humanity and all of existence, which is regularly damaged, through the forgetting of its basic essence.

According to Rav Kook, teshuva is returning to our true selves, individually and collectively as a nation, and thus to God.

What teshuva means on a national scale, i.e., for Israel

An individual can sever himself from the source of life, but not so, the entire Jewish nation. The national assets, which are beloved to the nation….are all invested with the spirit of God: her land, language, history, and customs…the spirit of the Lord and the [national] spirit of Israel are one.

During these early days of Elul, we find the intersection of teshuva, Rav Kook, his redemptive vision, and the ideal national structure of the Jewish people in their homeland, the Land of Israel, described in this week’s Torah reading, Parshat Shoftim. We find both Teshuvat HaPrat (individual teshuva) and Teshuvat HaKlal (national teshuva, i.e. the return of the Nation of Israel to its land, and to its soulful essence).

The Torah shows the Jewish People, the institutions needed, to build a holy society in Eretz Yisrael (the Land of Israel), that will then become a shining example for the nations, on how to express Tzidkut (righteousness) on the national level.

Tzedek, Tzedek Tirdof … Justice and Righteousness shall you pursue, so that you may live and possess the land the Lord your God is giving you

Parshat Shoftim describes policies that Jews should be striving to implement today: Malchut/Kingdom, Sanhedrin/Torah, Nevuah/Prophecy, and Kehunah/Holy Temple. It provides the blueprint to building the Tzadik State of Israel, in the time of Redemption.

What is a Tzadik State?

Just as the Torah sets out the structure, of how an individual Jew can best relate to his Creator (through the Mitzvot), and express his/or her personal example of Kedushah (holiness) in the world, it also does it for the Jewish People on the national level. This national structure sets up the framework for individual Jews and the nation as a whole, to reach their full potential. The purpose of their “chosenness.”

In our generation, HaShem (the God of Israel), is redeeming the Jewish people before our eyes. Besides prayers, longings and individual teshuva, it’s possible to do actual physical acts, for example making Aliyah (move to Israel), settling and building up the Land, serving in the army, etc., all aspects of national teshuva.

And, what can be done, like working to re-establish the Sanhedrin, and preparing all the materials, to rebuild the Beit Hamikdash (Holy Temple), should be done.

Rav Kook’s prediction for teshuva for all Israel

The world order that is now toppling, due to the awesome storms of a sword covered with blood, demands the re-construction of the Jewish nation [in its land].

The building of the nation and the discovery of its spirit are one concept, linked to the building of the world, which is disintegrating and longing for a force filled with unity and loftiness…the spirit of God pervades her [Israel]…The voice of God calls loudly, and from the interior of our soul and life’s movements we distinguish it.

Israel must uncover the source of its life, to stand apprise of its spiritual character…World civilization totters, man’s spirit weakens, darkness covers all the peoples…But the hour has arrived, the light of the world, the light of the true God, the light of the God of Israel, revealed by his people…must be revealed in consciousness, and the consciousness must be internalized within the nation, to recognize the unity of her talents….When she will recognize that there is a God within her, she will understand how to tap the wellspring of her life, and how to orient her redemptive vision to her essential source.

All the world’s civilizations will be renewed through the renewal of our spirit…The blessing of Abraham to all the nations of the earth will commence…with our rebuilding in the Land of Israel. The present destruction, is the preparation of a profound renascence [of Israel and the world].

… To be a light unto the nations, that My salvation may come to the ends of the earth.

1 Literally, “anniversary,” in this case the anniversary of someone’s passing.

2 Literally, “judges.” But here the word refers not to the book of Judges but to a specific passage in Moses’ valedictory, Deuteronomy.

Do Not Tell Me One Person Cannot Make A Change!

Consolation: Ben & Jerry’s or the Return of the Jews to Israel?