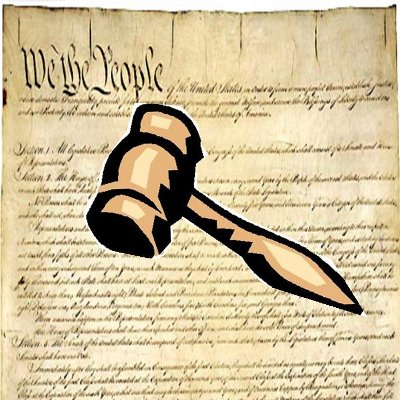 The Framers of the Constitution of the United States, and those who framed the constitutions of each of the 50 States, all sought to separate the various governmental powers among three branches of government, and allow each to check and balance the other two. Yet the judicial branch has lately begun to assert a power that the other two branches are nearly powerless to check, power that threatens our liberty and our values.

Any Constitution in the United States recognizes three distinct branches of government:

The problem: the Framers never meant to vest in any branch any particular oversight power to make sure that the government was following the Constitution. But then, in Marbury v. Madison (5 US 137 (1803)), the United States Supreme Court held (6-0) that “an act of the legislature repugnant to the constitution is void.” This case established the principle of judicial review, by which courts could hold acts of the legislature unconstitutional.

The United States Supreme Court, with several March for Life participants in the foreground.

Separately, in McCullough v. Maryland (17 U.S. 316 (1819), the Supreme Court gave itself the power to declare state acts unconstitutional. The problem: the particular statute that the Supreme Court relied upon was of doubtful constitutionality itself. Commenting on McCullough, Thomas Jefferson made his famous expression of alarm at an independent judiciary, unaccountable to the other branches:

The Constitution, on this hypothesis, is a mere thing of wax in the hands of the judiciary, which they may twist, and shape into any form they please. It should be remembered, as an axiom of eternal truth in politics, that whatever power in any government is independent, is absolute also; in theory only, at first, while the spirit of the people is up, but in practice, as fast as that relaxes. Independence can be trusted nowhere but with the people in mass.1

Nor does the United States Supreme Court alone reserve to itself this awesome and dangerous power. Every Supreme Court of every state acts likewise, from time to time, and the results can sometimes be disastrous and outrageous. Cases in point:

And in New Jersey:

In each of the above cases (except the last), the relevant Supreme Court has chosen to legislate from the bench, even going so far as to enact an income tax and to require towns to facilitate, or even compel, the provision of a good or service at a price less than the market will bear. In all these cases, the courts have acted, as Jefferson feared, to “twist and shape” their respective Constitutions “into any form they please,” when they so please.

The remedies against such behavior are severely limited, and not all the precedents are helpful. The boldest, and most dangerous, remedy is open defiance. Thus when the US Supreme Court ruled against the deportation of certain Amerindian (“Beringian”) tribes, President Andrew Jackson famously said,

John Marshall has made his decision; now let him enforce it!

and deported the tribes anyway. Various commentators on the New Jersey budget and the matter of school funding have suggested that the Governor ought to act similarly. The problem: the deportation of the Amerindians (the “Trail of Tears”) redounded to the national shame. More broadly, to set a precedent by which either branch can simply ignore the courts is to invite a disaster of the opposite kind.

The more commonly applied remedy is for the executive to wait until a Supreme Court justice retires, or dies. But when the senate is in different hands from the governor, the senate might not cooperate. The scandalous affair of the intended replacement of John E. Wallace is a prize example of what can happen in that event.

Theoretically, any legislature can remove a judge through impeachment. But legislatures have been loath to remove any judge for impeachment unless that judge be shown conclusively to be taking bribes. Thus Congress removed Judge Alcee Hastings from a district judgeship in Florida, after he was found to be taking bribes. (Judge Hastings subsequently became Representative Hastings, because the Senate did not bother to disqualify him permanently from holding or enjoying any office of honor, trust or profit under the United States.)

Happily, several states have put in place another means by which the people may hold their judges and justices accountable: judicial elections. In Iowa, any judge or justice must periodically stand for retention election; in 2010, three of the Justices who voted for same-sex marriages the year before (see the Varnum case above), failed of retention. In Texas (and, famously, in Wisconsin), though judges usually receive their offices by appointment (when a judge quits or dies), those judges must not only stand for election, but also, and more importantly, those elections are competitive elections, in which another lawyer can run against them. Thus far, those elections have been pro forma. That need no longer be the case.

Here in New Jersey, it should be enough to amend our Constitution so that every judge or justice must face retention elections every seven years, not merely for an initial term, but every seven years thereafter, until their seventieth birthday or their elevation by the governor to a higher court. As a further refinement, perhaps a judge should be subject to immediate recall, after he or she has served a year on the bench, on petition by twenty-five percent of the registered voters in his or her vicinage (or in the entire state, in the case of the Supreme Court and the Appellate Division).

Thomas Jefferson said it best: the only part of a republican society that deserves full independent power, are the people. Thus, the people must take that power in hand, and never surrender it again.