The study of Noah’s Ark began 300 years ago with a Jesuit priest named Athanasius Kircher. Not until today has anyone studied the Ark in the same detail.

Who was Athanasius Kircher?

Athanasius Kircher (1601-80) was born in Geisa, Buchonia, Germany. He was what one called a “Renaissance Man.” He was familiar with many subjects, not just one. In fact, he did not separate different areas of knowledge, the way we do today. Thomas Woods called him the “master of a hundred arts.”

He was one of the first Western men to suggest that all human languages derive from one original language. This was the “perfect” language that God spoke. Kircher never did name that language, but the basic idea is sound. Kircher might have missed it because he did not know where to look. That language is probably Hebrew, or an “Old High Hebrew” that furnished its roots. (Classical Hebrew is one of the few languages, if not the only one, that does not borrow words from other languages.)

What did Kircher think of Noah’s Ark?

The first thing that struck Kircher about Noah’s Ark was its proportions. It is 50 cubits in beam and 30 cubits in height. Kircher recognized these proportions as those of the human body. (The 5 to 3 ratio also comes from early in the Fibonacci sequence, in which each number after 0 and 1 is the sum of the two that came before it.) Kircher always looked for a “theory of everything” that would make everything consistent. He noticed that Noah’s Ark and the human body had the same proportions, and believed that God made them that way for a reason. (The Ark of the Testimony (see Exodus 25 and following) had two of the same proportions as Noah’s Ark.)

Kircher did not stop there. He calculated the volume of the Ark and worked out deck plans for its three decks. He made precise plans for the animal stalls, the feed and equipment storage, and the crew’s quarters.

What did Kircher say about the animals?

Kircher listed all the animals that he thought Noah’s Ark carried. These did not include every animal known to man at the time. Kircher was sure that many animals were crosses between two more basic animal kinds. Noah would not have taken such crosses aboard; that would have wasted space, food, and fresh water.

Did the study of Noah’s Ark stop after Kircher died?

Kircher was the last one to study Noah’s Ark in detail for centuries. Men stopped taking the Bible seriously, and stopped taking Noah’s Ark seriously. That’s when artists drew pictures of Noah’s Ark that were out-of-proportion, like a claw-footed bathtub without the feet, and with a single weather deck with a pilothouse.

Is anyone studying Noah’s Ark in detail today? 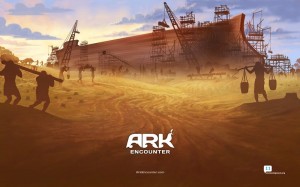 An artist's concept of Noah's Ark in the desert.

Yes. Tim Lovett (Noah’s Ark: Thinking Outside the Box) has studied Noah’s Ark in even greater detail than Kircher did. Kircher assumed that Noah’s Ark was a simple box. Lovett’s concet includes features of ancient Mediterranean warships. These include a rigid sail and a sea anchor at the other end.

Lovett signed on with Answers in Genesis as their chief consultant on Noah’s Ark. In August, AiG will break ground on a full-scale wooden concept vessel, that will show what Noah’s Ark must have looked like, inside and out, on all three decks.

Featured image: model of Noah’s Ark under construction: Credit: Creation Museum and Answers in Genesis; taken and used by permission.

Related Topics:biblehistoryNoah's Ark
Up Next

Noah’s Ark replica race is on

No linguist today would claim that all languages are derived from one language. There is no evidence for that statement, and there is plenty of evidence to the contrary. The idea is not sound, and has been discarded as being nonsense.