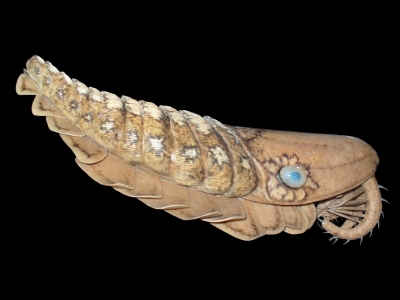 Paleontologists have found sea predators on land, in the wrong layer. Only a cataclysmic Flood could have put them there.

The journal Nature has an article this week about the latest finding of sea predators on dry land. (See here and here.) Paleontologists (scientists who study ancient, extinct creatures that they find buried deep in shale, limestone, and so on) call these creatures anomalocaridids—literally, “abnormal shrimp.” They look like shrimp, but are giant-sized. Some of them measure a meter long. They had long limbs, bristling with spines, on their heads, and blade-like filaments across their backs.

Everyone who has looked closely at them agrees that these were sea predators. They are among the largest of all sea predators and other creatures buried on the same level.

Until recently, all the experts thought that the anomalocaridids all died out during the so-called Cambrian Period. The Cambrian stratum is the deepest layer of ground containing fossils of various types. But the latest finds, from southern Morocco, were in a layer one step up: the Ordovician. So now the scientists think that these sea predators out-lasted their fellow products of the “Cambrian Explosion” and persisted longer than anyone has thought.

Most people learn in high school about the geological column or geologic system. This system describes the broad and deep layers of rock under the ground, rock containing many fossils. The broad layers, twelve in all, each have their own sets of fossils within them. Geologists assume that some process or processes laid down all the things in one layer at roughly the same time. They also assume that these processes took a great deal of time—millions of years.

The system divides the supposed great age of the earth into three eras and divides these further into periods. But though the names of the eras suggest the passage of time, the names of the periods do not. The periods all take their names from the area of their first geographical discovery, or else from some feature of the rocks or their fossils. Hence, Cambrian (Latin Cambria, the ancient Roman name for Wales) means “first found in Wales,” Mississippian means “first found in Mississippi,” and so on. Cretaceous means “filled with chalk.”

No single spot on earth has rocks or fossils from all twelve periods. Different areas have different groups of layers from the twelve periods. But sometimes one or more periods are missing, though no one can say that the rocks from that period simply washed away.

The sea predators pose a problem

Sea predators, like these giant shrimp found on dry land, pose a problem. What event buried these creatures on land? The land must have flooded when those creatures died. Furthermore, they died suddenly. Any fossil is either a suddenly dead creature or the impression that it made (like a negative mold).

These particular sea predators, the giant shrimp, pose a bigger problem. They are not supposed to be where a local collector found them to turn over to the scientists. What made them last longer than anybody thought? And what finally killed them off, even if a little late?

William of Occam once said not to multiply guesses without good reason. In other words, when you want to explain something, keep it simple. The simple story is: The twelve periods are all one. They did not sort over time, but by the relative weights of the rocks. And because all the rocks fell in place at once, it doesn’t matter that you cannot find any given layer everywhere, or that layers are missing from their “sequence.”

What laid them down all at once? A Great Flood, the greatest that the world has ever known. That Flood also killed these creatures instantly. And it preserved them, so that today we can know the kinds of creatures that once swam the first oceans before the Flood wiped them out.

You want to tell the other readers where I have misrepresented anything?

Please excuse me, but I must say that you, apparently, have your head in the sand. Denying something, does not make something else, legitimate and, reality.

I gain the impression that you, like, many, hide behind the word, “science.” Many people, like to think that “evolution” is science, when, in reality, it is basically, “pseudo science.” It is an unproven and unworkable theory, which continually is being revised because its [so-called] “scientists” are anti-Creation. Rather than practicing true science and, believing in the Creator, as the first cause, they would, instead, trumpet their [faith] belief that all that we hear, feel, see, and experience, all of a sudden appeared [evolved] on its own.

Even those who disregard the Hebrew and Christian historical testimony about Creation and Noah’s Flood, were quick to concede how great the force of water can exert in one “small” portion of the globe – aka, the recent Japanese massive earthquake and subsequent devastating tsunami.

Mike – For your on-going education, please reference the following, as I’ve documented some evidence of the awesome destructive power of earthquake, volcano and flood:

“Evolution’s Old (Age) Earth Propaganda, Debunked —
In Light of the Japanese Earthquake and Tsunami Flood – Will Some People (finally) take seriously the history of the Genesis Flood:?”

Terry writes:
Sea predators, like these giant shrimp found on dry land, pose a problem. What event buried these creatures on land? The land must have flooded when those creatures died. …. William of Occam once said not to multiply guesses without good reason

Terry’s model fails on several counts, such as those places where alternating marine and terrestrial environments are found in the strata. How about flowering plants which seem to have outrun the velociraptors to high ground or the oak trees that outran the pterodactyls there.

Terry is a fan of Dr. Walt Brown’s “Hydroplate” model for explaining the flood. On his “Examiner” blog, Terry expressed Dr. Brown’s “disappointment” at my lack of understanding of basic refrigeration. In Terry’s last post on the Flood, Terry mentioned refrigeration. OK… nearly all of us have had a car overheat at some time. Why is it we don’t put our hand over the radiator when removing the cap? Is it frostbite or burns? And that’s just a few gallons of water at less than 250F and 15 psi. Now, think of half the water in Earth’s modern oceans at over 700F and 62,000 psi. Will we get a nice cool rain or a scalding steam bath? I’ll be happy to allow each reader to decide for his/her self.

Terry, are you really saying that all of the various creatures whose fossils are in all the various layers of rocks were all alive at the same time just about four thousand years ago? Say just prior to 2304 BC? And they lived for only for a few thousand years before that, say only after 4004 BC? The earth must have been awfully crowded.

The earth had 1656 years to populate before the Flood. And in that time, they probably developed a level of technology that we can’t imagine. Tim Lovett has speculated on a minimum technology that Noah would have needed. That level is about the level of the ancient Egyptians. But they could have developed way beyond that, for all we know.

You cannot even get fossils without sudden death and burial. And I do mean sudden, as in seconds. If the millions of years you believe in had passed, none of these creatures would have left any impression at all.

Okay, Terry, so you’re willing to admit that there are twleve different main layers in the geological column – right?

Can you then explain how all the millions of different fossil creatures are each found only in one characteristic layer of the geological column (accepting the puzzling problem of the anomalocaridids being one layer off)?

If all these extinct creatures lived for only a maximum of 1656 years. how did they get sorted into their distinctly layers – all over the entire planet – during Noah’s Flood? Was it a miracle?

Or would you be willing to accept that they were sorted into their distinctly different layers over several billion years? (Which is the hypothesis accepted by essentially all actual geologists and paleontologists?)

Terry, since you seem to be a fan of Walt Brown’s “hydroplate” flavor of creationism, would you mind answering a few questions?

I’m sure you will admit that the rock that makes up the earth’s crust would not normally float on water. What miraculous force held up the surface layer of the earth above the subterranean waters from the time of creation to the time of Noah’s flood?

At just a few miles down, the earth is quite hot – well above boiling temperature. The water under Brown’s “hydroplates” would be superheated as well as under intense pressure. What miracle kept Noah’s flood in the liquid state? It would have come out as high pressure steam and boiled everything. What miracle kept the inhabitants of Noah’s Ark – not to mention all sea life – from being killed by the superheated water?

Thanks, I was a committed evolutionist till I read your thought provoking article.
Praise the Lord!

“Paleontologists have found sea predators on land, in the wrong layer. Only a cataclysmic Flood could have put them there.”

Plate tectonics take care of why the fossils are now on dry land. That the fossils were found in the more recent Ordovician rather than the Cambrian is the interesting thing since it shows that they did not die out in the Cambrian–Ordovician extinction event. It says nothing about your non-existent global flood.

All right, then. Tell me why that land was underwater. What brought that water to cover that land? Only a global flood could have done that.

When you consider the Morocco find, and other similar finds worldwide (including sedimentary rock at the top of the Continental Divide), all the explanations offered (local floods, etc.) become absurd on their faces. And even you don’t see that the very thing you just threw in my face, is an epic fail for your side.

Terry, all you have are unsubstantiated assertions. Sedimentary rock comes from any body of water. A single flood is disproved by the multiple layers of sedimentary layers separated by igneous and metamorphic rocks. Plate tectonics explains the rest but since it conflicts with your bronze age book you will never see it.

Throwing off on me, eh? You’re the one repeating unsubstantiated assumptions. Like “billions of years.” Sedimentary rock comes from hydrological sorting. Shake any suspension of sand and water hard enough, and it will settle out in neat layers, from the heaviest to the lightest. Elementary physical chemistry.

Don’t give me that “millions of years.” The sedimentary rock can only have come from a global flood. And the mountains raised themselves up after the flood waters came, not before.

You have to be an expert at cherry picking to maintain faith in Christianity (just look at all the different denominations).

You don’t come to such ridiculous assertions without ignoring a great deal of information (or without maintaining a high level of ignorance).