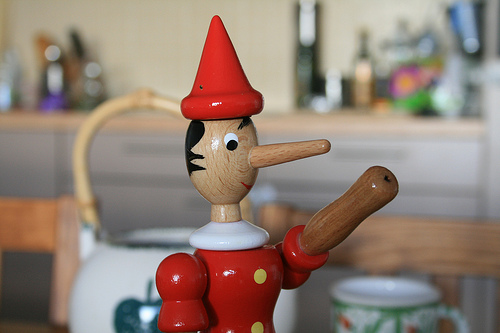 You might have seen the vicious Mediscare video by now entitled “America the Beautiful.” If you haven’t, you should. It’s from folks who just the other day were chanting the mantra of “civility.” It’s a taste of what the left will be serving up as 2012 approaches.

America the Beautiful, according to the left

As the song “America the Beautiful” plays, a man in a dark suit with a likeness to Republican Rep. Paul Ryan of Wisconsin pushes an elderly woman in a wheelchair down a sidewalk. The message on the screen informs us that the Republican Medicare reform proposal will “privatize” Medicare. The man diverts to a steep path as the woman’s smile turns to terror. She fights as he pushes her faster. He then dumps her headfirst off a cliff, which we see clearly from the front. The only thing missing is a vampire giving her a hickey on the way down.

Not since Barry Goldwater was smeared in 1964 with the famous “little girl with daisy and mushroom cloud” TV ad has there been such bald-faced character assassination.

The ad was produced by the Agenda Project, a leftist group. Earlier they made a similarly nasty Tea Party video whose title includes the f-word. They also made “Hate Begets Hate,” a hateful assault on public figures who oppose the Cordoba House Mosque at Ground Zero in New York City. That one has little Muslim girls crying and being comforted while photos of big, bad (and even some liberal) politicians are quoted. This is propaganda at its rawest. No, wait. They topped it with that lady pushed over a cliff.

The non-level playing field that the left has built 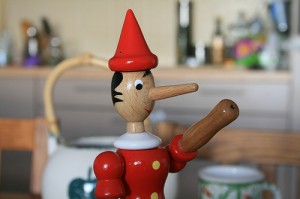 Pinocchio's nose gets longer when he tells a lie. Too bad the left does not share this weakness. Photo: Jean-Etienne Minh-Duy Poirrier, CC BY-SA 2.0 Generic License

The good news is that the left knows that more and more Americans are onto them. So they’re resorting to more desperate tactics. The bad news is that, absent a real traditional press corp to keep them honest, they’re still getting away with it. But their days may be numbered. A rising class of conservative sleuths such as Lila Rose, Hannah Giles, James O’Keefe, CNS News reporters, The Washington Times’ Kerry Picket and author Ben Shapiro are using the new media to great advantage, exposing Planned Parenthood, Hollywood and lying liberal politicians.

The playing field has never been fair. The left has a broader palette from which to color public opinion. They can use truth if that works – or lies if those work. As Karl Marx said, “the ends justify the means.”

Conservatives have to tell only the truth for a couple of reasons. First, there’s the commandment not to bear false witness. When you lie, you’re messing with God Almighty, not just the people you’re fooling. This is not something that most secular leftists lose sleep over. Second, if you’re a conservative, you wouldn’t get away with it. The traditional media would pursue it mercilessly instead of ignoring it or covering it up.

The damage that the left has done

Over the years, leftist lies and media complicity have done enormous damage. In 1931, New York Times Moscow Bureau Chief Walter Duranty parroted Soviet propaganda while Joseph Stalin systematically starved, shot and tortured to death his opponents. Duranty, who won the Times‘ first Pulitzer Prize in 1932, looked the other way when Stalin in 1932-33 forcibly starved to death millions of Ukrainians. Duranty even went so far as to denounce reports of famine by other journalists. British reporter Malcolm Muggeridge, who reported on the famine for the Guardian, called Duranty “the greatest liar I have met in journalism.” Stalin went on to murder millions more in Russia, and Franklin Roosevelt referred to him as “Uncle Joe.”

Twice, the Pulitzer board has refused to rescind the award despite pleas from Ukrainian groups and a recommendation to do that from an independent report solicited by the New York Times and given to the board. You have to wonder what it would take.

Sometimes, the nature of the crime is reckless denial. Like President Obama declaring that under Obamacare, we can keep the health coverage we have now, or Massachusetts Democrat Rep. Barney Frank telling a House committee in 2004 that Fannie Mae and Freddie Mac were in no danger: “I don’t see anything in this report that raises safety and soundness problems.” Other Democrats accused the Bush administration of bad motives and even racism for demanding more accountability.

Later, after the “affordable” mortgage-driven housing bubble burst in 2008, driving the economy into the worst recession since the Great Depression, Democrats blamed private “greed” and lack of government oversight. Of course, people can be spectacularly wrong without intending to lie. But either way, why is Mr. Frank continuing to make financial policy for the United States?

Sometimes a technically true statement can function as a lie, such as the misleading caption on an Associated Press photo of Sarah Palin during her visit to Haiti in December 2010. Mrs. Palin’s daughter Bristol is adjusting some strands of her mother’s hair. Here’s how the caption reads: “Sarah Palin, center, has her hair done during a visit to a cholera treatment center. …” This implies that she brought a hairdresser in her entourage, flaunting her before the stricken Haitians. Can anyone say “Marie Antoinette?”

Finally, the mother of all lies was hatched at the U.S. Supreme Court about the circumstances of the plaintiff in Roe v. Wade (1973). Norma McCorvey, who was “Jane Roe,” had not been raped as she had alleged. She revealed this in her 1994 autobiography, “I Am Roe.” Meanwhile, the Roe decision, combined with the Doe v. Bolton ruling the same day, has destroyed the Declaration of Independence’s guarantee of “life, liberty and the pursuit of happiness” for more than 50 million unborn aborted children and caused harm to millions of women. It’s also done enormous damage to the rule of law, with the majority of justices in Roe ignoring the constitutional division of authority and applying what Justice Byron White’s Doe dissent termed “raw judicial power.”

Conclusion: how to fight the left

From pushing fictional elderly ladies over cliffs, misreporting atrocities, distorting research and fudging the facts in landmark cases, the left marches on, confident that the media will not look too closely, ask too many questions or stop acting like cheerleaders.

Conservatives and, it is hoped, honest liberals, will need to be more aggressive and have faith that telling the truth is the right thing to do. We have it on good authority that “the truth will make you free.”

Robert Knight is a senior fellow for the American Civil Rights Union and a columnist for The Washington Times. This article originally appeared at The Times under the title Democratic Press Handmaidens.

This article appears here by permission of the author.

Liberty, federalism and the conservative statesman

While I agree that the Left, I sure wish we could start calling them by their real name, Socialists, Communists, and Progressives, has really distorted our lives with altering our History, We the People had better wake up and; 1. take some responsibility for these results, and 2. Choose what kind of America do we want. I believe the first place we should start is with ourselves. We should not be silent when ever we see wrong to speak out regardless of where that might be or who might not like it. Sincerely Linda L Hill

Actually, this video is fairly spot-on with the way the Republican Party has handled healthcare (or rather, obstructed its improvement), actively undermining efforts to make private businesses more accountable in the way they dispense healthcare… and using media propaganda tools like “Death Panels,” “Socialism,” and our sense that “America is #1” (when it isn’t by a long shot on healthcare coverage).

The developed world has shown us that socialized medicine works, and works better than the privatized system we have, yet due to fearmongering we still refuse to change our system for the better, which is a real shame.