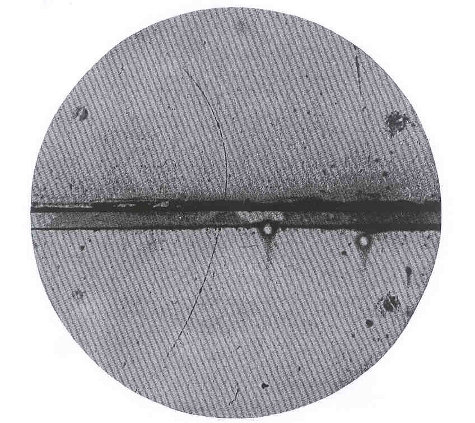 Antimatter isn’t as common as it should be, by the Big Bang theory. Some scientists hope to find out why. But any creation advocate knows why.

Antimatter is like normal matter, but backwards. Its electrons are positive, its protons are negative, and all its magnetic moments are in reverse. When two identical particles of matter and antimatter meet, they destroy each other and release a lot of energy as gamma rays. 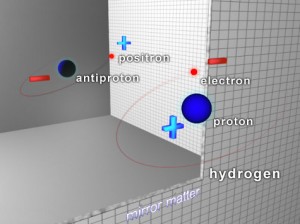 Direct comparison of matter to antimatter, to show that matter and antimatter are like mirrors. Graphic: National Science Foundation

Antimatter forms from gamma rays, too. But such an event should form matter and antimatter in the same amounts. The Big Bang theory states that a tremendous explosion created all the matter in the universe. But it should have created as much antimatter as matter.

So where is all the antimatter? Where are the antimatter planets, stars, systems, and galaxies? Michael Oard reviewed the papers that relate to this problem in 1998. They all say the same thing: no one can find the antimatter.

That is a serious problem for the Big Bang theory. In fact, since the first nuclear physicists discovered antimatter, speculators looked forward to finding all this antimatter and using it as an almost limitless fuel, for power and especially for transport. Now that dream is gone—but more than that, the Big Bang theory is in trouble. If that theory has any truth to it at all, then the universe must once have had as much antimatter as matter—and doesn’t any longer.

Where could the antimatter have gone?

Actually, it’s as well that all that antimatter doesn’t exist. If it did, the universe might have destroyed itself in a flash brighter than the Big Bang was, and we would not be here to argue about it. But matter doesn’t just disappear. If it once existed, it had to go somewhere.

One possible clue might be if matter and antimatter are not the mirror images of one another that everyone thought. The technical term for this is charge-parity-time-reversal symmetry, or CPT symmetry. Parity is the “handedness” of the universe—and in fact, the universe is more right-handed than left-handed. The obvious question is: why does matter have a privilege over antimatter? That alone violates the CPT symmetry principle.

CERN believes that it can find the answer only by assembling enough antimatter to test it for CPT symmetry. That has been impossible—until now.

How to harvest antimatter

Capturing antimatter particles is easy—they form all the time in many of the experiments that CERN runs every day. But confining antimatter is another matter. The only way to confine antimatter is in a magnetic bottle. The trick is to trap anti-protons (negative charge) and anti-electrons (positive charge, also called positrons) long enough for them to combine, to form anti-hydrogen.

Until recently, CERN’s scientists could not do that for more than seconds at a time. But recently they reported in Nature Physics that they could form and trap anti-hydrogen for as long as seventeen minutes.

What can they do with it?

If the experimenters can handle anti-hydrogen that long, then they can compare it to normal hydrogen, to see whether it obeys CPT symmetry, or has a right-hand thread, or a left-hand thread. If it breaks CPT symmetry, the scientists already say that they will revisit all their theories about where the universe came from. Jeffrey Hangst, a professor at Aarhus University in Denmark, put it this way:

Any hint of CPT symmetry breaking would require a serious rethink of our understanding of nature. But half of the universe has gone missing, so some kind of rethink is apparently on the agenda.

The Bible tells us the real answer: the universe did not form by itself. God formed it, and He preferred matter to antimatter. The CERN scientists aren’t ready to admit that yet, and might never be. But they already know that the Big Bang theory doesn’t fit if the antimatter is missing. If they try to save the theory, they’ll only make it more complicated than it has already become, to explain a dozen other inconsistencies.

Noah’s Ark replica race is on