Atlas Shrugged has one problem that affects everything else in it: Ayn Rand, its author, never understood God or the Bible correctly.

What points does Atlas Shrugged make?

Nathaniel Branden, in The Benefits and Hazards of the Philosophy of Ayn Rand, names ten things that Atlas Shrugged tries to teach:

So what could be wrong with that? 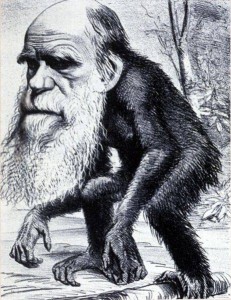 This classic caricature of Charles Darwin is ironically much like the mental image that one forms of some of the villains in Atlas Shrugged.

These principles are incomplete. Most of them are right and proper and will work well. But some (particularly number three) assume facts not in evidence. Or they reject facts that are in evidence. The Randian system, as Atlas Shrugged illustrates it, assumes that the incredibly capable creature called man came to be by accident.

Even Ayn Rand was not comfortable with that. Branden says that Rand once said, off-the-cuff:

After all, the theory of evolution is only a hypothesis.

She tried to backtrack that later, but her answer did not satisfy. Her philosophy has one essential premise: that man can think, and nothing else can. She never thought about how man came to think, or why man can think and no other animal can think. (Nor did she accept the claims for rational thought and action by bottle-nosed dolphins or other kinds of great whales.)

The larger problem is: no system can self-inform. And human beings, and indeed all other living things, have a wealth of information in their cells that no one can measure. Where did this information come from? It could only have come from outside. So Someone gave that information to everything living. That Someone is the One Who made everything living, and a place for everything to live.

Does that threaten human liberty?

If you have only Atlas Shrugged to go by, you might be afraid of that. Every time anyone in Atlas Shrugged appeals to faith, they always invoke a God Who will tell you what to do, and yours is not to reason why. They also say that God is a Socialist. And oddly enough, the same villains in Atlas Shrugged who write and issue socialistic “directives” to the people, also hold to legalistic standards of personal behavior. (Or so they say.) Real-life socialists do not behave that way—quite opposite, in fact. Representatives Barney Frank (D-MA) and Anthony Weiner (D-NY) are (booby) prize examples.

How did Rand miss that?

Branden, again, tells us how.

Ayn Rand was born in Russia—a mystical country in the very worst sense of the word, a country that never really passed through the Age of Reason or the Enlightenment in the way that Western Europe did. Ayn Rand herself was not only a relentless rationalist, she was profoundly secular, profoundly in love with this world[.]

Rand has another problem: she thought that Christianity is socialism. Your editor would say that she got that idea out of Acts chapters 4 and 5, that described the early Church experiment in communal living. (Or she might have gotten the idea from hearing about kibbutz in pre-War Palestine.) But in fact Rand showed no sign that she ever read the Bible at all. If she had, she might have realized that all those who used the Bible to justify socialism were lying.

Furthermore, you don’t have to accept secular custom in order to love the world as God created it. The world, and the way men try to run it, are not the same.

Thomas Jefferson got it right: God created men equal, and gave them rights. Man cannot take those rights away. But Rand never believed that the God of the Bible was a God of liberty, or of order. Had she read the Bible, she might have understood that.

How could this have improved Atlas Shrugged?

Rand could have left all references to God, and all appeals to faith, out of Atlas Shrugged, for all the relevance they had. Or she might have included, among the followers of John Galt, a priest who got fed up with his church’s advocacy of socialism. (Rand almost did that, but then decided to decry God altogether and blame the concept of original sin for the acceptance of socialism.)

Whether she would have been willing, is another question. Rand’s theory of sex was too awkward even for her one-time associate, Nathaniel Branden. And she almost needed an episode with “adult” implications to advance the plot at a key spot later on.

Today, the Tea Party movement imitates the valuable part of Atlas Shrugged, and ignores the false split between God and liberty. And the socialists are not even bothering to say, “We thought that being Christian is all about charity.” They can’t afford to, because they fear Christianity even more than Rand did, though for different reasons.

Religious conservatives sure do love to hate Atlas Shrugged. Never read it personally.

One part of the foolishness here is the idea that agreeing with Rand’s prediction and diagnoses in “Atlas Shrugged” – the accuracy of which has been demonstrated in the last few years to a nicety – somehow magically commits one to agreement with her total philosophy. Would this argument be extended to an atheist leftist who recommends Tolstoy or Victor Hugo?

The other part is a specific misrepresentation of Christianity. Christianity is not a pro-Statism religion; indeed, given who killed their Savior, it tends to the anti-State. (This is something the left has not yet dealt with.) Nowhere in the Bible does it say that wealth should be expropriated and redistributed by the dubious means of government structures; it speaks of personal and *voluntary* charity. One might add, looking at the horrific debt and unfunded liabilities situation that the U.S. is in right now, that the Bible and Jesus were wise in staying away from government panaceas.

This entire kabuki charade is in bad faith. The Bible does not advocate any Progressive notions of “economic justice.” The progressives who have suddenly discovered religion and its necessary role in politics – after thirty decades and more of stridently and rightly insisting it must be kept out of politics – are not sincere. After this temporary rhetorical bubble is over, they will resume their previous, also ad-hoc, declarations.

As for the “sociopath” accusation, this is what comes of copying attack website garbage. The whole thing rests upon one author – Prescott’s – highly selective excerpting and chopping up of a private [i.e., thinking out loud without clarifications ] journal written when Rand was barely out of her teens, fresh from the blood bath of 1920s Soviet Russia – and still made it very clear that her read on the personalities of the observers showed that they were not appalled by Hickman’s crime – she said there had been far worse, without the same spectacle of glee – but by his flamboyant and mocking defiance of society. She – who was writing about a *legally innocent man* at the time of the trial – even called him a repulsive and purposeless criminal. Enough with the disinformation and – yes – Satanizing of Ayn Rand.