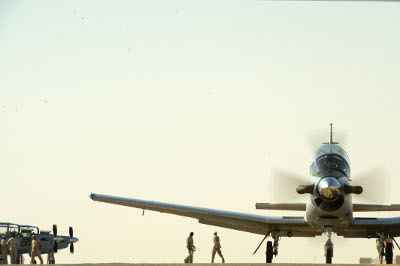 Milestones are being achieved and partnerships are being strengthened here at Combat Operating Base Speicher (formerly Al Sahra Airfield) in Tikrit, Iraq, home of the 52nd Expeditionary Flying Training Squadron, US Air Force.

Advising Iraqi forces is nothing new to the Iraq Training and Advising Mission component of the U.S. Air Force. Since the troop drawdown began early 2009, Iraqi forces have started to take the lead in air combat operations, but not without help.

The 52nd Expeditionary Flying Training Squadron is instructing the Primary Pilot Training courses and the Primary Instructor Pilot in the T-6A, the same trainer that the USAF uses back home.

Once Iraqi officers attend a short training course on the basics of flying, they then attend the Primary Pilot Training course. The approximately one year long course will produce pilots who earn their pilot wings. Graduates of the primary pilot course will attend the six month instructor course. Upon instructor pilot graduation, graduates are charged with the task of training the upcoming student pilots.

Flying training in the T-6A began here in December of 2009. Since then, each program has graduated classes, with five classes currently in session. 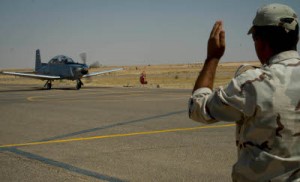 An Iraqi Airman marshals in a T-6 Texan piloted by an Iraqi student pilot instructor at Combat Operating Base Speicher, Tikrit, Iraq on June 29, 2011. Students will graduate the course and become some of the first Iraqi instructor pilots. (U.S. Air Force photo by Staff Sergeant David Salanitri)

Just like formal training in the U.S., courses here are constantly improving.
“Within the past week, we’ve had three first-time events here,” said Maj. Mark Loranger, assistant deputy of operations and instructor pilot.

According to U.S. Airmen leading the first iterations of the Iraqi pilot training, the Iraqi air force is one-step closer to being self-sustaining.
“In the next one-two months, the Iraqi instructors who have graduated our course will take the lead in the squadron,” said Maj. Sean Long, 52nd EFTS instructor pilot.

The Iraqi leadership is already customizing the squadron to their liking. This is not our program, it’s Iraq’s.

We don’t want to duplicate the program we have in the U.S. because the Iraqi air force is not the U.S. Air Force. Their challenges are different.

Though many things are going well here, not everything is smooth sailing. Local challenges for the Iraqi air force students are present in the form of insurgent violence in their home towns. When a pilot arrives to training in the U.S., he’s able to focus on training without having to worry about local violence in their family’s home town.

Here, it’s different. Students have obligations to their families and their safety.

To overcome set backs in training due to students having to tend to their families, classes are broken down into smaller numbers and the courses are slightly longer so that the entire operation doesn’t stop when one student has to go home.

We currently have 16 young Iraqi officers in our course. They’ll graduate from the instructor course and go on to teach many Iraqi pilots long after we’re gone. Ten to 15 years from now, we hope to find ourselves flying next to them as allies and that will be our legacy.

Featured image: An Iraqi Air Force student instructor pilot taxis his T-6A Texan II out to the runway June 29, 2011, at Combat Operating Base Speicher in Tikrit, Iraq. Students graduating from this course will become some of the first U.S. Air Force-trained Iraqi instructor pilots. The T-6 is the primary training aircraft of the unit. Photo: US Air Force/SSgt David Salanitri

Afghanistan war speech persuades no one

The so-called ‘T-6 Texan’ in the photo is actually a Beechcraft with a turboprop engine. A T-6 uses conventional landing gear and a radial engine. It was phased out as a trainer decades ago.

Elliot–That is an incorrect statement. The T6 Texan is used by not only the Iraqi Air Force, but the U.S. Air Force. Don’t believe me yet? Check out the Air Education and Training Command website and view their factsheet. link to aetc.af.mil

US Pilots train on them at multiple bases around the US. Maybe you should do some homework before presenting something as fact.

I used to work for Raytheon Aircraft sales office based in Kuala Lumpur and your statement is so wrong !

The aircraft in the picture is Raytheon T-6A Texan, it was a joined venture effort between Raytheon and Pilatus and later on we developed on our own.

I suggest when you want to make such a stupid statement like that, you better go check your facts because you just made yourself look like a fool !

[…] Air Force leaves a legacy in Iraq – Conservative News and Views Once Iraqi officers attend a short training course on the basics of flying, they then attend the Primary Pilot Training course. The approximately one year long course will produce pilots who earn their pilot wings […]