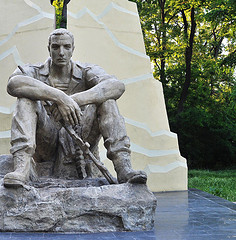 President Obama weakly tried to compromise with his Afghanistan war speech. He persuaded no one and invited military and political defeat.

Summary of the Afghanistan war speech

President Obama gave this speech to the American people beginning at 8:01 a.m. EDT last night (June 22). He will withdraw 10,000 troops from Afghanistan by year’s end, and another 23,000 troops by the end of next summer. In all, Obama will withdraw as many troops as he sent in about 18 months ago..

The President talked about “nation building,” and hinted that it, like charity, begins at home. He also talked about the Libyan campaign, and repeated the refrain that

we do not have a single soldier on the ground, but are supporting allies[.]

Reaction on the right

The right is split. The Ron Paul half sees little gain from any further adventures in Afghanistan. The McCain-Graham half says that we can win the Afghanistan war, but not by withdrawing so many troops at once. In fact, Obama has rejected the advice of his commanding general in the theater, General David Petraeus. Recent word that the USA is negotiating with the Taliban for a “political settlement” confuses everybody. The reason: while he is negotiating with the Taliban, he is also negotiating with Hamid Karzai’s government to keep American drones and special forces in place. Everyone asks, Why? Why fight a war with half measures? Either fight to win, or get out, but make up your mind, Mr. President. So say the military experts, and the commentators on the right.

Reaction on the left 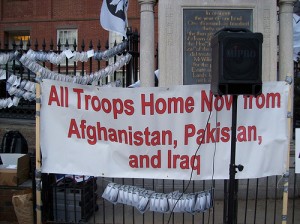 Bostonians protest after the 1000th US military death in the Afghanistan War. Photo: Michael Borkson. CC BY 2.0 Generic License.

The left is almost of one mind on the Afghanistan war speech: they hate it. If one single thing defines the hard left, it’s that they “don’t wanna study war no more.” They want American troops out now, and that means all of them. They won’t settle for anything less, no matter who is President. In fact, they voted for President Obama because they expected him to deliver just that. Now he won’t, and they hate him for it.

Paul Whitefield’s opinion piece in this morning’s Los Angeles Times is typical. He proposes three measures that he seems to hope will guarantee instant war weariness:

Whitefield has two good points: the government financed the war with borrowed money, and not even with the sale of specific war bonds. And the War Powers Act deserves either a direct challenge or detailed obedience—not Obama’s contemptuous dismissal.

More to the point, Whitefield and others simply do not like war. And even after withdrawing 33,000 troops from Afghanistan, Obama will leave about 67,000 of them in place. To fight a losing battle, says the right (both halves of it). To die for nothing, says the left.

The irony is that Obama made his Afghanistan war speech for political reasons only. He is trying to placate his anti-war base. If Paul Whitefield at the LA Times is any example, he has failed. The left thinks him a traitor. The right thinks him worse than Hamlet. And the soldiers must think that he is using them, not leading them.

Featured image: a memorial to the Soviet Afghanistan war stands in the Ukraine. Photo: Letitia Avierklieva. CC BY 2.0 Generic License.

FYI – you got a typo somewhere Terry.

Indeed, the left is very disappointed in Barack Obama.

His administration’s decision to defend DOMA (though since rescinded), his failure to cease the Bush tax cuts, and his pursuing of the Iraq and Afghan wars in addition to the Libyan War, all of this topped off by his not closing Guantanamo Bay and reforming our methods of holding and interrogating prisoners have made him seem to be more of a center-right candidate and scarcely different from George W. Bush.

I think this is one of those decisions that a President needs to make with the knowledge that there’s no clean solution most of the country will be satisfied with.

Personally I side with the people who feel that we need to withdraw from Afghanistan at a faster pace. You’re not dealing with Germany after WWII, you’re in a hostile terrain populated by tribal factions that no single government will ever fully have influence over.

I don’t want the Taliban to take over there, but if we’re going to be realistic, it’s not in the U.S. national interest to do nation-building there. They may have harbored Bin Laden, but the Taliban itself never attacked the U.S. directly, and they are well aware of the price of harboring anti-American terrorists in the future. The potential threat level simply does not justify the expense of a military presence there, especially with more significant threats coming from Pakistan, a nuclear state.

(Contrast this with our actions in Libya – for all the complaints about not having a national interest in removing Qaddafi, he’s a leader who personally ordered a terrorist act that killed Americans on Pan Am 103, and remains a credible threat for similar sponsorship of terrorism)

If Obama has to err, let it be on moving more troops out than less, and if Afghanistan can’t hold itself together, then that will have to be an acceptable consequence as long as our nation is not directly threatened from entities within it.

America’s time, talent and treasure, specifically the lives of our service men & women, deserve worthy missions with a meaningful purpose. That no longer exists in Afghanistan.