A church in Plainfield, NJ, set up a gun buyback program with local police. But a local attorney warns that the program is illegal.

Details of the gun buyback program 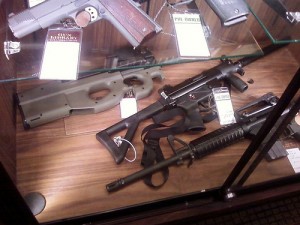 A collection of guns, including the sort of assault firearm illegal in New Jersey. Photo: user kosheahan (Flickr), CC BY 2.0 License

Shiloh Baptist Church in Plainfield, NJ set the program up. It ran last Saturday and will run again this Saturday (barring any court injunctions, of course). Seven churches, from four denominations, are taking part.

Anyone wanting to sell or “unload” a gun may bring it to one of these churches. The church staff will ask no questions and will pay as much as $200 for any firearm. Then someone—the program doesn’t say who—will destroy the guns.

Attorney Evan F. Nappen of Eatontown, NJ, says, in effect, “Not so fast.” He and colleague Richard Gilbert wrote The NJ Gun Law Guide (available here). Now he offers a $5000 reward to anyone who can show whether and how the law allows a program like this. (Hat tip: David Codrea, National Gun Rights Examiner.)

New Jersey’s gun laws are part of the New Jersey Criminal Code (NJSA 2C). Among other things, this code defines “assault firearms,” other weapons that no one may have, and the types of people who may not have weapons at all. Nappen says that this gun buyback program raises several other issues, any one of which would make the program unlawful. The law covers not only possession but transport of weapons. It does not allow anyone to surrender a weapon without giving his name and address. It does not allow anyone other than the local police chief or the New Jersey Superintendent of State Police to accept the surrender of a weapon. The State may agree not to prosecute someone for unlawful possession if he gives the weapon up. But that person is still liable, depending on how he got that weapon, and what he did with it before he gave it up.

The problem: if someone gives up a gun “with no questions asked,” and someone else destroys the gun, how is a district attorney to know that the person giving up the gun broke no laws other than the law against unlawful possession? What about the law against unlicensed transport? Suppose he stole the gun from someone else? Now that other person won’t get his gun back.

That last gives a clue to the real agenda. Even David Codrea didn’t mention this, though he has said before that gun buyback programs don’t work as those setting them up say they intend. Here someone could steal a gun and turn it in to this gun buyback program. The organizers will then destroy it. So the original owner never gets his gun back. And the police are “copacetic” with that?

Maybe because the police want not so much to stop the mayhem, as to disarm the people. Someone doesn’t get his gun back, though he broke no laws? Fine! He shouldn’t have a gun anyway. No one should, except a law-enforcement officer. That’s how a lot of police departments think.

This is the flip side of Operation Fast and Furious. That’s the federal program to run guns into Mexico (from two directions), to skew the statistics and excuse more gun control. (The National Rifle Association is suing over new gun control measures.) It serves the same end as this gun buyback program, and other programs like it, serve. And that is: to get guns, not so much “off the street” as out of the hands of the people.

The Second Amendment to the United States Constitution says,

A well-regulated militia, being necessary to the security of a free State, the right of the people to keep and bear arms shall not be infringed.

Aside from the legal issues that Nappen realizes, this gun buyback program violates the Constitution.

How can the church buy back guns?

Did it sell all these guns to people in the first place?

You can’t buy “back” what you never sold in the first place.

I will not quote the whole second amendment since you have
already. The final words “SHALL NOT BE INFRINGED” undeniable implies firearms are not to subject to any laws
or restrictions, which includes their fovorite catch all,
the commerce clause.

I realize there are those who like to claim no right is
absolute, but I contend “SHALL NOT” can not be any more so.
Therefore, there cannot be such a crime as illegal
posession of a firearm.

The bill of attainder clause of the Constitution clearly
means to prohibit depriving one of their civil rights as
punishment for any crime. One can be sentenced to death,
but one is to retain all rights after completion of any
punishment. That is why they fallaciously claim the
commerse claus grants them authority to regulate firearms,
also why they claim driving is a priviledge and not a
right.

Our trusted officials have managed to so stigmatize simply
owning a firearm people just accept what they are told.
The very nearly attached the same stigma to our Constitution.