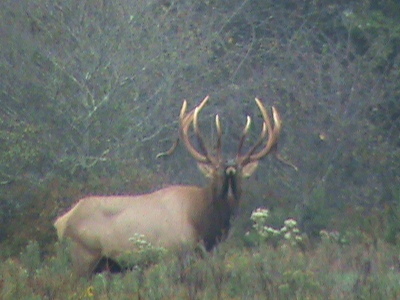 The EPA dropped a subtle hint of furthering UN Agenda 21. It’s so subtle that even outraged conservatives don’t recognize it.

The United Nations describes UN Agenda 21 as “a comprehensive plan of action” to promote “sustainable development.” That’s supposed to mean development that does not affect the environment long-term. It actually means limiting population growth and expansion, and controlling where people live and work, how and what they eat, etc.

Mass demonstrations would be very difficult to arrange. Worse than that, this could kill churches, private schools, and any sort of club that holds private meetings. No dictator could ask for a better set-up. 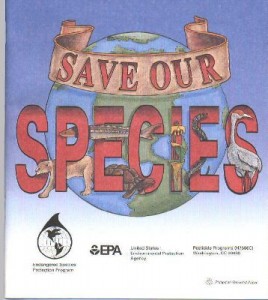 The EPA "Save Our Species" coloring book. Photo: US EPA (public domain as per Copyright Act of 1973)

Last week, the author of the Guns and Religion blog wrote of getting an interesting item in the mail. It was a coloring book titled Save our Species! Many of the animals it depicts are not “species” at all, but variants on a common theme. (An aside: evolutionists like to talk about natural selection as the engine for the diversity of species. But these same people suggest that man could threaten that diversity. It is almost as if they now say that natural selection no longer works. Some people should get their stories straight.)

The publisher of that coloring book: the United States Environmental Protection Agency. The front cover lists the programs that produced the book:

The G&R author made two points. First, he did not have anyone in his immediate family who would enjoy a coloring book. Second, the cost of mailing easily approached $1 a copy. Why is the EPA sending coloring books by bulk mail when the country is nearly bankrupt? The ARRA News Service agrees.

But G&R and ARRA News miss the point. Any waste of government money is bad enough. But whether the EPA prints hard copies and sends them through the mail, or publishes it on-line, doesn’t matter. What matters is the work itself. It is a propaganda piece for children. The message is plain: the grown-ups are killing all sorts of lovely, multicolored animals! People must do something to stop it!

Something, maybe, like UN Agenda 21? Something like returning vast tracts of farmland and forest land to the wild, and forcing us all to live in cities with college-campus-style plans?

Americans have “managed” their wildlife almost since America won its independence. Sometimes the government has miscalculated, with disastrous results. The near loss of the mule deer in the West is a prize example.

Not all wildlife management programs end in tragedy. Pennsylvania officials reintroduced elk, or “wapiti,” to their western lands in the last century. Officials plant “herbs” that elk love to feed on, define and protect a range for the elk, and allow limited hunting. The elk herd has grown to more than 700 head. The local economy benefits from visitors who come to Benezette, PA, and other towns in the elk range, to watch elk from afar and hear them during the rut season.

UN Agenda 21 would change all that. The most likely “sustainable development” plan would force Benezette and the other towns to evacuate. It would allow only authorized rangers (and, perhaps, well-connected civilians) to view the elk. The elk herd could grow larger than the land could support. And then the wildlife planners would introduce another, dangerous element: the gray wolf. In fact, gray wolves have decimated elk herds in the Rocky Mountains. Pennsylvania officials brought their first elk specimens from those mountains. What will they do when the wolves threaten to kill all the elk? (Wolves do not kill only when they’re hungry. They kill for sport, and often bury their kills to eat later.)

But of course, real wildlife management has never been the point of UN Agenda 21. The point is human management and human control. The un-worthies at the UN don’t care what happens to the animals. If one animal kills another, and for sport, that doesn’t matter. The idea is to limit human beings’ choices of where and how to live, work, shop, eat, and travel.

A pretty coloring book does not change that. And when the government prints it, it becomes an instrument of propaganda. That, and not the costs of printing and mailing, is the real threat.

Featured image: A bull elk (Cervus canadensis) bellows a warning to his fellows to steer clear. From a viewing blind near Hicks Run, PA. Photo: CNAV.

Why Chris Christie is mistaken

You’re falling into the trap that the UN has set for you. Agenda 21 is a pretext. It’s a simple way of getting people wound up so that the UN and its stooges in the American and European governments can track down and deal with people who oppose it.

A coloring book for kids! I can’t believe you’ve fallen for this. Your name will be on a list now, if it wasn’t already.

Agenda 21 is more than pretext. It is a carefully thought-out plan. I’m here to show its implications.

I think you missed my point. Yes it’s a plan, but it’s only the start. Your article talks about evacuation of some small towns, but the whole point of “Agenda 21” is to create areas of the world that are “off the map”. Now I don’t know exactly what this is all aimed at, but I agree with you that it has nothing to do with animals!

Take the next step, and think about what’s happening in these human-free areas!

elaborate briefly pls. Why can’t there be big central planners who want people to thrive and live with animals?!! Aren’t things better, well not now, but isn’t life safer and healthier than before with all our advancements? This is what bothers me most about Maurice Strong. Did he devise this all just to take out the U.S. because of envy and he thought we would keep growing use up too much? And then the third world leaders who dominate the U.N. ganged up with him. Why then the Bushes? They really want us all in stack in packs? Who would wish this on their children or the children in their community? We have so much land. We can co-exist with nature. We ALL are more enlightened and capable now, I think that is a major point they miss. They trying to break the back of the masses via finances and regs. Cripes, I live so green. I can’t believe what I have believed.

OK, I don’t buy all this Agenda 21 consiracy stuff.
Note: I don’t trust central planners. Never did, never will. But central planning is what got us the development patterns we have today … patterns that DO NOT ALLOW any divergence.

Let’s keep our eyes out for totalitarian planning, but let’s not forget that that is what we have had for the last 45 years or so.

People want a choice in how they live. SOME people want to live in a more densely populated area, withot having to use a car everyday, able to walk to most everything that they need or want. That should be allowed. Right now it isn’t.

So, let’s drop the top-down central planning model we’ve had for so long and allow development that people want and will pay for. There is plenty enough space to have high denstiy areas, suburbs, rural and completely wild areas. It’s not either/or.

Maybe not. But Agenda 21 does exist, and the dense-city/abandoned-rural-land model is the one they have chosen.

Nevertheless, I agree with you to this extent: city plan commissions are antithetical to human liberty and ought to disband.

Lori is right that many folks love city livin. But Lori read about all the private public partnerships in your town or county. They are steering people out of the burbs, they’ll make owning a car very pricey, force I mean nudge you into public transportation. Cyclists have become crazed environmentalists! If it weren’t true it would be funny. Not. Non profits are basically running the show and they are agenda 21 communitarians, major major controller types. The dangle carrot grants out to local schmocals and get them hooked on sustainable development policies right under their own noses. Plus they use our property taxes for all this erosion of personal freedom, watch is slow and steady. The big planners study human behavior. People who want to do what they want to do will be in their sights. They do not recognize the U.S. Consitution, redefine each amendment to their viewpoints. Geoff might be right too. Info is key, thank you Terry. democratsagainstagenda21.com will help you Lori. :)

[…] property.” She is “proud” of a “President” who has signed on to an agenda that calls on governments to abolish private […]

UN Agenda 21: one State fights back - Conservative News and Views