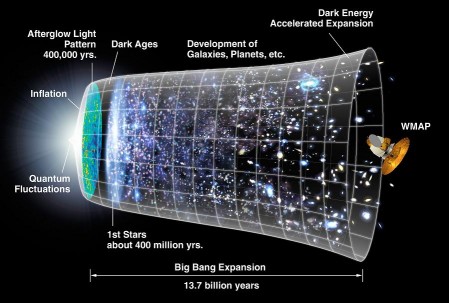 The universe is expanding more rapidly, not less. An accelerating universe forces us to re-examine all our theories of its origin.

Drs. Saul Perlmutter, Brian Schmidt, and Adam Riess, among others, discovered the accelerating universe in 1998. They saw that large objects closer to earth moved faster than objects farther away. They showed this by studying Type Ia supernovae, the closest thing to a “standard candle” in all the universe. For this, Drs. Perlmutter, Schmidt, and Riess won the 2011 Nobel Prize for Physics.

In an interview appearing today at National Public Radio, Perlmutter discussed his find, and what it means. His find obviously shocked him: he compared it to

throwing the apple up in the air and seeing it blast off into space.

The universe has four elemental forces (gravity, electro-magnetism, and the strong and weak nuclear forces). Only gravity acts at long range. Gravity attracts; it does not repel. Ever since the publication of the Big Bang theory, astronomers and cosmologists have always expected the universe to slow down from gravity. The only debate in those days was whether the universe would:

Albert Einstein realized early that his famous field equations, from his General Theory of Relativity, predicted an open universe from then-current observation. Einstein fought that interpretation, but eventually accepted it.

No one expected an accelerating universe.

Dr. Moshe Carmeli, in 1996, was the Albert Einstein Professor of Theoretical Physics at Ben Gurion University, Beer Sheva, Israel. He predicted that Einstein’s grand theory needed revision to deal with the entire universe. General relativity is suitable on local scales, like that of our solar system. It does not take into account the scale of an expanding universe.

Carmeli worked out his own solutions to Einstein’s field equations. He first realized that the universe was not only open, but accelerating. Two years later, Perlmutter, Schmidt, and Riess would discover that fact for themselves.

Trying to explain an accelerating universe 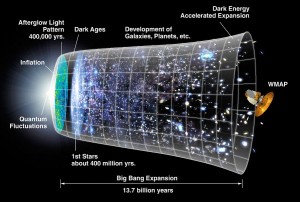 Perlmutter supports the first option above. He talks freely of “dark energy,” the common name for this unseen force pushing the universe apart. If dark energy exists, then three-quarters of the mass-energy of the universe consists of dark energy. But even Perlmutter admits that no one has any idea of what “dark energy” is all about.

At this point, I think there’s been a paper averaging almost every day for the past 12 years with theorists of physics trying out different ideas for what could be the explanation. If you ask almost any of them, “Do you stand behind your theory? Is this the answer?” I think almost everyone would say, “No, no, no. I’m just trying to expand the range of possibilities.” We really don’t know what’s going on.

That leaves the second option: that Einstein’s theory is incomplete and does not apply on a cosmic scale. Perlmutter clearly does not want to believe that. But he does admit that this could be correct.

Perlmutter notes that Einstein’s theory has been correct to great precision. Thus any theory that could agree with Einstein on a local scale just as well, would be “amazing.” But in fact, cosmological relativity is a general case, of which Einstein’s relativity is a special case. Relativity itself is a general case of Newton’s laws of motion. Sir Isaac Newton worked out laws of motion and energy on the normal, human scale. Einstein worked out these laws on the scale of much greater speeds. Carmeli, and John Hartnett after him, worked out laws on the scale of an expanding universe. Each succeeding theory kept the last as a special case.

More to the point: dark energy need not exist under cosmological relativity. Dark energy is a “fudge,” like the prediction of a planet inside Mercury to explain why Mercury’s orbit accelerated slightly with every close pass at the sun. Einstein shows that no such inner planet (or asteroid belt) need exist, and the Mariner and MESSENGER probes never found any such object(s). Dark energy will also fail from lack of evidence.

Evolution fails the tests of science

I wonder how many of these scienctist have considered Dr Walt Brown’s Hydro Plate theory and some of the issues he has identified with a host of current “scientific dogma”?

Very few of them, I’m afraid. In fact, even many creation scientists don’t want to recognize Brown’s singular achievement.

Sam
Reply to  Terry A. Hurlbut

“They saw that large objects closer to earth moved faster than objects farther away.”

The farther away objects are in the universe from Earth, the faster they move. Basic cosmology.

Or at least, so it appears. Space itself is doing the moving, but I don’t think either of us disputes that. What’s new is the mathematical treatment of that motion. Moshe Carmeli worked out a solution that expected the universe to accelerate, two years before anyone realized that the universe was accelerating. But because no one paid any attention to Carmeli, they came up with this “dark energy” fudge.

Sam
Reply to  Terry A. Hurlbut

Dark energy, whatever it may be, is still considered the thing that’s causing the acceleration.

By whom? Only by those still trying to salvage a theory that needs mathematical fudges to explain something it never would have predicted. Because that’s what dark energy is: a fudge.

I predicted an accelerating expansion for the Cosmos in 1994, as an effect of gravity and the conservation of momenta, given an infinite eternal universe – where the Cosmos /big bang is surrounded by infinite other possible cosmoses (a multiverse). See my comment on the ‘Variable dark energy’ article on NSfor a detailed expalanation.

Creation Day 4: Age of the Universe - Conservative News and Views