You are on a train making a wild run to a certain wreck. You try to stop it. Nobody is willing to help you. You can either ride the train to the inevitable smash-up. Or you can jump. And somewhere out there, someone is already telling those who should be your friends to jump off the train. Jump where? Into what? You don’t know. But someday you’ll have to find out. That is the dilemma that Strike Productions’ new movie, Atlas Shrugged, Part One, sets for you.

The opening scene, showing a fast-freight train hitting a split rail and jumping the track, plays out against a chilling montage of an America that is all too likely. American in 2016 is not a pleasant place to live. Gasoline sells for thirty-seven dollars (you read that right) per gallon. Airline travel has stopped completely. Rail travel has come back, but even that is unreliable and often dangerous. Major superhighways fall apart, oil imports are no longer available. The United States Navy has grown so weak that it cannot cope with a pirate who sails the Atlantic and seizes “government relief ships” with impunity. And the American people accept this! More than that, they know that a Second Great Depression is setting in. The headlines scream about that all the time. The people read them and sarcastically ask,

Who is John Galt?

Three people, at least, are not content to let things slide. Two of them, Dagny Taggart (Taylor Schilling) and Henry Rearden (Grant Bowler), are determined to stop the slide. Small thanks they get, though: Dagny Taggart has to fight the economic slide with one hand, and her no-good brother (technically her boss) with the other. Henry Rearden has the worst collection of grasping, mooching hangers-on that you can imagine in his house. They try to live with it, and the interference from a set of government bureaucrats and their cronies that seem to have come right out of today’s headlines. (Think Solyndra on one side and the Keystone Pipeline on the other.)

But a third person isn’t just letting things slide–he’s making them slide. He’s doing it by approaching the best and brightest businessmen, contractors, and other movers-and-shakers, and telling them to quit. These include some of Dagny Taggart’s best employees. This man lures them with the promise of “a society that cultivates individual achievement”—something that American society clearly does not.

The action is as fast-paced as that opening train-wreck scene. Director Paul Johansson (who also plays the mysterious interloper) hooks the viewer and keeps him hooked to the end. After an hour and a half, the viewer wants more–after all, no movie (at least, no good movie) ever explains everything. The ending is not quite a cliffhanger, but it is a defeat. The question for the viewer, other than “Who is John Galt,” is: when will the hero and heroine decide to jump off the train, as so many of their best customers, employees, and suppliers have done? 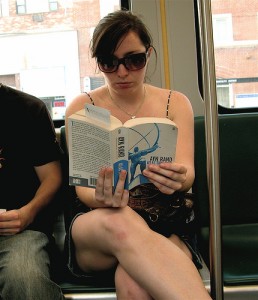 Read the book now, or see the movie, while you can be sure that they are still fiction. Photo: Seth Tisue, CC BY-SA 2.0 Generic License

This movie premiered on April 15, 2011. It was a limited engagement and drew scathing reviews. CNAV will not reveal too many details, as many of those reviews contained egregious spoilers. But CNAV wonders whether any of those reviewers actually watched the film—or if they did, whether they made up their minds in advance not to like it.

The reasons aren’t too hard to guess. To watch Atlas Shrugged is to wonder whether art imitates life, or life imitates art. In fact, this particular art anticipates life. One of the opening scenes looks as if it came from the Occupy Wall Street protests. But those protests began six months after the premiere.

More than that, Atlas Shrugged presents a vision of what America might look like after five more years of the present administration. Even the Washington characters look familiar. Wesley Mouch (Michael Lerner) is a dead ringer for Cass Sunstein, Barack Obama’s “regulations czar.” Courts seem non-existent, as if Johansson knew that a time would come when Obama would totally ignore them.

The script does change at least one part of American government. The bicameral Congress seems to be no more. In its place is a unicameral Legislature, with about 120 members, with a Speaker as presiding officer. This Legislature operates under a set of rules that emphasize speed over deliberation. Exactly what a power-hungry politician would want.

Atlas Shrugged the movie does have its flaws. The few newspapers that it shows often show articles with text and headlines that simply do not agree (not to mention misspelled by-lines). Director Johansson rushes through some scenes. Obviously he wants to keep up the pace, but he risks losing the viewer’s attention. Similarly, some of the most detestable villains have very little screen time. The interloper who encourages good men to go “on strike” mostly seems wooden, and some of his lines are far too short for the effect they’re supposed to have.

As is inevitable in any story that is part of a series, the movie has several characters and scenes that would be pointless in a self-contained story. The prize examples are Francisco d’Anconia (Jsu Garcia) and Ragnar Danneskjøld (who never appears). D’Anconia sets his hypocritical hangers-on for sure disaster, but still has a motive beyond mere schadenfreude. What that motive might be, the movie never reveals. Danneskjøld is the notorious pirate with whom the Navy cannot cope. One character says that Danneskjøld steals from the government to give to the rich, but how does he know that? In fact, no one should have any reason to know what this pirate does with his booty, except the pirate himself.

Atlas Shrugged is, of course, based on Ayn Rand’s gigantic novel of that name. Readers will recognize most of the characters in it, with a few exceptions. They might not recognize Eddie Willers (Edi Gathegi), who is an almost completely different person. The mysterious track walker who, in the novel, pumps Willers for information, never appears in this version. Neither does Cherryl Brooks Taggart, but then again, she wouldn’t have time to appear in an hour-and-a-half movie.

But the characters who do appear, look and behave exactly as they would, if the story took place in the early twenty-first century, not in the twentieth. Some qualities of heroism, or villainy, transcend all periods. This applies equally to worse-than-useless CEO’s and to unloving wives and unappreciative permanent house guests. And in a sense in which Ayn Rand would scarcely have dared predict, time has caught up with a work that was decades ahead of it when it first appeared.

Are you seriously implying that the economic meltdown of 2008 and its ongoing effects were caused by TOO MUCH regulation?

I don’t just imply it; I state it. This goes back to the Community Reinvestment Act of 1973, and the repeated threats that Clinton’s AG made to the banks: lend to those people, or we’re going to accuse you of discrimination. They lent. Those people were deadbeats, and couldn’t pay back. (I suggest as well that the bankers were not all Midas Mulligans; they had a lot of Eugene Lawsons among them who were, frankly, placed at moral hazard.) The result was exactly what the authors of that law intended. I’m no longer going to give them the unintended-consequences excuse. This was a deliberate act to make as many people as possible dependent on the government.

The only thing missing in real life from the Atlas Shrugged scenario is a “John Galt” going around telling people to quit and go, as Ellis Wyatt memorably says in the last line, “on strike.” And if this sort of thing keeps up, we might need no John Galt to encourage us so to act.

Diablo
Reply to  Terry A. Hurlbut

And the trains…we are missing the trains. Oh and the magical metal. And the one dimensional characters…and the laborious and arduous rants for Objectionism by random people, and women willing to be raped. Other than that, the book is dead on to reality.

Those trains are still around. They are the trains of the National Railroad Passenger Corporation, known as Amtrak.

And I suppose that you admit that Mr. Thompson, Dr. Floyd Ferris, and Messrs. Wesley Mouch, James Taggart, Orren Boyle, Clarence “Chick” Morrison, “Tinky” Holloway, and Clem Weatherby all have their real-life counterparts.

Be thankful for one other thing that we don’t have–yet. That being Project X. Look it up.

[…] would be the sober reaction. The less temperate reaction would be the last scene in Atlas Shrugged, Part One, in which Ellis Wyatt lights his trademark Torch and leaves this telephone auto-answer greeting: […]

Atlas Shrugged all too feasible | Conservative News and Views