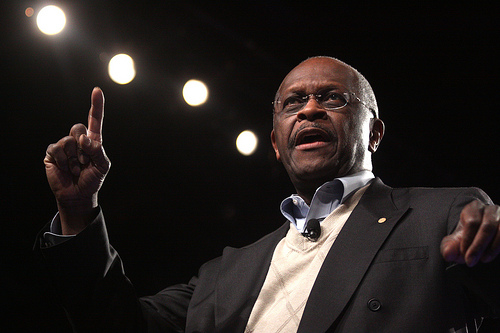 The 2011 political environment has coined a few new phrases that aptly fit the elitists that occupy our government. It would be nice to attribute these phrases exclusively to one party, but unfortunately that would be disingenuous. Crony Capitalism is the most recent, but Insider Trading – an oldie but goodie – seems to apply as well. Coming in under the radar is the newest – Bully Politics. And Herman Cain is its latest victim.

To be clear and up front, this is not a defense of Herman Cain. However, it is a plea to all Conservatives to stand strong and stand together against the bullies that that dominate the political scene. While many learn in childhood that giving in to the school yard bully just enables him to keep up his bullying, politicians often succumb to this very effective tactic. Who or what political party has manufactured the unending stream of Cain accusers is immaterial. The point is they have succeeded in destroying a viable presidential candidate. Ideally, it is these bullies who should be exposed and castrated from the political scene. Should they go unchecked, like all bullies that are allowed to continue without retribution, it will encourage them and others like them to resort to these tactics more often.

Men or women should succeed or fail based on their merits and their ideas – not rumors contrived by adversaries who can successfully manipulate damsels in distress or trump up fictitious scenarios of wrongdoing. It is truly amazing that perception can overrule reality in this world of media hype and slick commentators. It is even more amazing that those who deserve to be castrated from the public scene for nefarious dealings manage to be re-elected unscathed and unaffected. When men like Barney Frank and Ted Kennedy escape scrutiny and candidates like Herman Cain and Sarah Palin are reviled and made a laughing stock, something is indeed rotten in Denmark.

It’s open season on Conservatives – especially if you’re black or an attractive female. And if there isn’t anything concrete the drive-by media or opposition researchers can crucify you with, you can be sure they will be more than happy to manufacture something. Unless we get our act together, the bullies will continue to do what bullies always do. Washington D.C. may not be the local school yard, but political bullies do seem to rule the nest. Today it was score one for the bad guys – too bad, Herman, too bad, America.

How smart is Obama?

Should New Jersey change its name from the Garden State to the Sheeple State?

You got this right! I agree. If we do not take a stand and stop compromising our vote by following the media and establishment, we are sunk. They are the schoolyard bully and I am doing what my dad tought me……punch em in the eye and they will stop!”

I couldn’t agree more. Herman Cain, Sarah Palin and several others have been unmercifully attacked because of their political views with lies and twisted truth with no proof of any actual wrongdoing. This behavior we are seeing from the left and the left-controlled media is unethical and rehensible and should be considered as such. Bullying is an excellent choice of words to be used for their behavior.

As long as the Socialist-owned media functions, the “stands” people talk of taking amount to idle banter.
If people would summon up the guts to really take action, there would be wholesale boycotting of those radio and TV networks known to be fronts for the leftists.

They all live on advertising revenues, when their public exposure becomes critical advertisers pull their advertising.
They monitor how their ad. money is spent and what penetration it’s had to the viewing public.

The NY Times, Washington Post, LA Times have all felt the sting of reduced circulation. Boycotts can work…talking about it keeps the situation unresolved.

There are available sources of news without tuning the leftist supporters/ propagandizers. A change of habit is all it takes.

I completely agree that there should be no place in American politics for campaigns based on destroying opponents and unconventional voices through baseless attacks. In an ideal world we’d have a spirited, competitively intense challenge of ideas, with the best ones winning out through the choice of the people. People who study the debates that took place during the formation of the Constitution can see how this is supposed to work.

Sadly, we don’t live in an ideal world, and there are too many candidates willing to sell their souls for political gain, power and wealth to rise above tactics of personal destruction. Even worse, trends in recent court rulings favor environments where special interests and power brokers can hide behind any number of shell entities that make personal accountability a pipe dream.

Rather than accept this as an inevitable status quo, I’m also in agreement that each of us has the freedom and inevitability to drive change, and while a drop of water may not have much influence, enough of them acting in concert can have the impact of a tsunami.

All that said, I’m afraid Herman Cain is not the best example of a victim of special-interest bullying. Whatever one admires about the man, it’s pretty clear that the consequences of his own personal behavior and choices had more to do with the end of his campaign than any outside influence. Phone records are facts, not innuendo, and he’s also admitted that for all the public charity he’s performed, his “charitable” relationship with this specific woman was something he kept secret from his wife for 13 years. His campaign only ended after meeting with his wife to discuss the future together, and the content of that conversation justly deserves to be left private. I’m glad he’s doing the right thing by making his wife & family his priority over his political ambition at this time.

So while you’ll find many who agree with the sentiments expressed in this essay, I’d suggest using someone other than Herman Cain as an example of a bullying victim. No one is a victim of their own free choices.

I would say that his campaign had to fold up because it totally mishandled this affair. If he and his outfit can’t handle a thing like this, despicable as it is, then he wouldn’t be able to handle a foreign crisis. And everybody knew it.

The mainstream media will ignore the news that’s been out in the public about Obama’s homosexual propensities, yet, that same media will jump all over Conservatives about anything that hints at impropriety.

If the media wants to be “fair and balanced,” they should scrutinize the following:

Based on past experience, Cain’s departure was pretty much assured as soon as he started saying he wouldn’t drop out. My observation is that once a politician of official starts saying that, they’re pretty much gone.

As for the “fairness” of the situation, I can only say “Gary Hart.”

If a party is going to make support of socially restrictive legislation such as the Defense of Marriage Act central to its identiy, how can it complain when it is held to those standards? You can’t have your cake and eat it, too: if you’re going to legislate morality, you need to demonstrate it.

Seriously, folks, ‘manipulating damsels in distress?’ When a married man is, unknown to his wife, paying bills for another woman, something is already rotten. Friendship? Please. Just another man following in the bipartisan footsteps of Gary Hart, Bill Clinton, Mark Sanford, and Eliot Spitzer.

Your argument assumes truth, of course. If the case against Herman Cain turns out to be a tissue of lies, your argument falls to the ground.

And I don’t think that the sort of person who would encourage the very behaviors of which Mr. Cain stands accused, has any room to criticize him for them, even if he did do these things. What’s this? You reprove a man for doing that which you cheerfully do yourself?

Hiernonymous
Reply to  Terry A. Hurlbut

You’ve made a couple of tremendous leaps there:

First, I don’t assume anything. Cain himself has acknowledged the money, the “friendship,” the texts, the phone calls, and the fact that his wife knew about none of it. Without needing to extrapolate further, we are already presented, at Cain’s admission, both inappropriate behavior on the part of the candidate, and grounds to question the assumption that the various women raising accusations are being manipulated into misrepresenting anything.

Second,it would be interesting to hear you explain what part of my post implied anything about what I would cheerfully do. I have neither stated nor implied anything about what I would or wouldn’t do, or, for that matter, what I approve or disapprove of in terms of Mr. Cain’s personal life. The point I raised, and which you artfully avoided, is that Cain’s party has made personal morality a matter of public interest and public law, and a candidate seeking to represent such a party should not be surprised to find himself held to the standards his party intends to impose on the public at large.