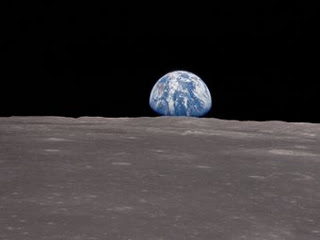 Earth is unique in the cosmos as a harbor of intelligent life. A secular science writer admits this and describes what makes Earth special.

As long as men have built cities, they have wondered whether they are alone in the universe. Religious men, of course, usually assume that we are alone. (C. S. Lewis briefly suggested that if we are not alone, then God has instructed other races to leave us alone, because we are fallen and they are not.) But even secular men, beginning with Plato, have claimed that man is alone.

Most secular men today reject the notion of a unique Earth. They reason thus: the universe is so vast, and has so many stars, that some of those stars must have planets, and some of those planets must have given rise to beings that could someday meet, talk, trade (or fight) with humans. Usually, those who speculate about non-human intelligences, place them just beyond the reach of human knowledge about the sky and the objects in it. Thus H. G. Wells speculated about civilizations on Mars and even on the Moon. People stopped speculating when explorers (on the Moon) or their robotic proxies (on Mars and elsewhere) found other bodies in the solar system hostile and inhospitable to life. So today people speculate about civilized life in other “solar systems.” How convenient! Even trying to go to such a star to find out would cost more than any government could raise with the most optimistic bond sales. Worse, getting a message back would usually take longer than the life, much less the career, of any flight director. CNAV doubts that any launch authority would last long enough.

Now comes a new book, Alone in the Universe, that says that looking for non-human trading (or sparring) partners is useless.

Conditions for life unique to Earth

John Gribbin (born 1946) has written about scientific hypotheticals for years. In his latest work (see here for the review by Alan Hirschfeld), Gribbin says flatly that the Earth is the only planet in the galaxy, at least, that can harbor intelligent life. Gribbin argues from conventional theories about the origin of the Earth and the solar system. This includes every theory that any secular scientist has advanced to explain various features of the Earth: a giant impactor to create the Moon, a “dynamo” in the earth’s core to generate the magnetic field, etc. Each of those theories has its own unique problems. But Gribbin observes several features that, he says, made human life possible. They include: 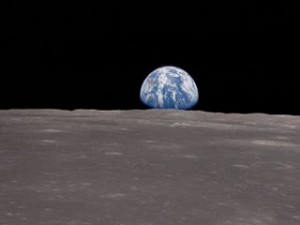 Earth rises above the horizon of the Moon as the crew of Apollo XI return from the Moon's far side. Photo: NASA/JSC

How the Earth came to have these features is less important than how likely this was to happen. The point is that, taken together, those features are a rigorous set of requirements. So rigorous are they that the galaxy has room for only one planet to satisfy them. That planet is Earth.

Gribbin lays out one more argument from what he supposes is the great age of the galaxy. If the galaxy is that old, then a civilized society should have arisen long before now. And if that society could survive and solve its own problems from environmental stress, crime, and war, then they should have conquered the galaxy long before this. Yet no explorer or observer has ever seen anything he could rely on to show that non-human intelligent life exists or existed. (If non-human life did arise on a world other than Earth, then it killed itself long ago, so that we would neither see nor hear from them today.)

A planet made to order

Creation advocates have no problem with Earth being unique. This is a variation on the anthropic principle. This principle holds that the cosmos is literally made to order for man.

…our existence in this universe depends on numerous cosmological constants and parameters whose numerical values must fall within a very narrow range of values. If even a single variable were off, even slightly, we would not exist.

These constants include the strengths of everything from the charge on a single proton or electron to the Four Basic Forces (strong and weak nuclear, electromagnetic, and gravity). Likewise, John Gribbin has shown that the Earth itself is made to order for man. In addition to the features Gribbin named, many other facts make Earth a remarkably hospitable place for man to live and thrive:

And now the problem of how Earth came to have these features becomes acute. By any reasonable standard whatsoever, Earth should not exist, either. Furthermore, the “fine-tuning” of the universe is an even worse problem than the fine-tuning of Earth within a fine-tuned universe.

In short, the cosmos, and the Earth, are miracles.

Related Topics:astronomycreationEarthscientific theory
Up Next