The Georgia Obama eligibility challenge is almost quiet now, but is not the only one. Activists have filed challenges in five other States. And though the mainstream media prefer to ignore the Georgia case, neither it nor the larger Obama eligibility drama will go away soon.

Last week, Administrative Law Judge Michael Malihi held a two-hour-and-fifteen-minute hearing on whether Barack H. Obama was eligible to appear on the ballot in the Georgia Democratic primary. The court notified Obama that the hearing would take place. At first, Obama’s attorney, Mark Jablonski, tried to quash the hearing and a subpoena of his hard-copy birth certificate and supporting documents for this Social Security number. Malihi denied the motion. So Jablonski imperiously wrote to Secretary of State Brian Kemp, all but ordering him to cancel the hearing. Kemp refused, of course. He also warned Jablonski that if he and Obama stayed away,

…you do so at your own peril.

Jablonski could have shown, and Malihi might have accepted that. But Jablonski didn’t show. So Malihi called the three plaintiffs’ attorneys (Van Irion of the Liberty Legal Foundation; State Rep. J. Mark Hatfield; and independent attorney Orly Taitz) to see him in chambers. There, according to persistent rumor, Judge Malihi offered to issue a default “judgment” (actually a formal recommendation to Kemp) in their favor. (Bob Unruh of WorldNetDaily reports today that “several” of the lawyers did say that the judge had offered to do just that.) If Judge Malihi made such an offer, then the attorneys definitely refused. They likely did so because they wanted to get their evidence on record, in case Jablonski or anyone from the White House Counsel’s Office took exception. 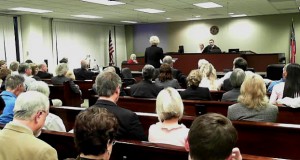 The Obama eligibility hearing before Judge Michael Malihi of the Georgia Office of State Administrative Hearings. Photo: The National Patriot; from a live video stream in the courtroom.

Judge Malihi did not allow anyone to comment on whether Obama was in contempt of court. He did say that he wanted any additional briefs in his chambers by February 2 (or, by some accounts, February 5). The judge has made one ruling, to deny a motion by Taitz to “request” that the courts in Hawaii compel Hawaiian officials to release a good-copy birth certificate. Malihi observed that he has no jurisdiction in or over the State of Hawaii.

Such is all the news from Georgia—literally. Cindy Simpson, in American Thinker, observes that several reporters got off a lot of sarcasm at Orly Taitz’ expense after the hearing, and then reported—nothing. (The site CowboyByte.com excerpted the article here.) Fox News Channel briefly quoted Secretary Kemp’s “at your own peril” letter, but did not cover the hearing and has said nothing about the challenge since. (According to Simpson, Rachel Maddow on MSNBC took time to ask her colleagues not to “dignify this nonsense or elevate it by paying it any attention.”) Van Irion sent this letter to his subscribers decrying Obama’s behavior. He also explained why he did not want a default judgment:

Understand that the goal of the Georgia ballot challenge was to have a court rule on the merits of the Constitutional question: Does the term “natural born citizen” in Article II of the Constitution require a Presidential candidate to have two parents that were U.S. citizens at the time the candidate was born? Obama wants to avoid having a court rule on this question. That is why he didn’t show up and ordered his attorneys to not show up. Obama was hoping that the Georgia court would enter a default judgment rather than rule on the merits. If the court enters a default judgment, Obama will have succeeded in avoiding the Constitutional eligibility question. He will then appeal the default judgment, get the appellate court to suspend the default judgment pending appeal, and then delay the appeal until after the primary. This is undoubtedly Obama’s plan.

Simpson, of course, decries the complete reporting failure. To get more perspective, CNAV shared this story with several residents of northern New Jersey. All reacted in shock and outrage that none of the media organs deigned to report it.

Obama eligibility challenges in other States

Officials and/or judges in five other States have considered, or are considering, Obama eligibility challenges:

Van Irion filed his Tennessee case in November, along with his Georgia case. He does not care about the birth certificate. For him it is enough that Obama’s father was a British colonial subject and never became a citizen of the United States. But Sheriff Joe Arpaio of Maricopa County, Arizona, has been investigating Obama’s documents since October of last year.

The chief case-on-point as to who is a natural-born citizen is Minor v. Happersett (1876). The Court held then that Virginia Minor was a natural-born citizen because she was born in-country to two citizen parents. Curiously, the site Justia.com has scrubbed mention of the Minor case from several other copies of Supreme Court opinions on its database. WorldNetDaily reported this in October.

Illinois resident Sharon Meroni sued her State recently. She wants to have a court enjoin the State from listing Obama on the ballot in the March primary. She cites the US and Illinois constitutions as forbidding all but qualified candidates to appear on ballots.

The site Obama ballot Challenge is the most prominent Obama eligibility challenge site on the Web today. It is the coordination point for efforts in all fifty States to challenge Obama’s ballot placement.