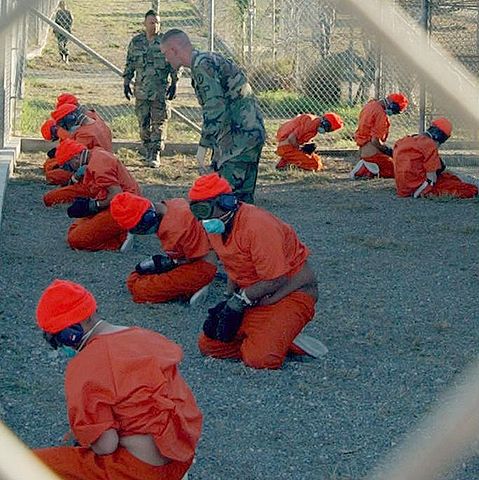 The defendants in the terrorism trial that opened at Guantanamo Bay last weekend disgraced themselves. They mocked the families of those who died on September 11, 2001. They poured contempt on the military tribunal and the proceedings. In so doing, they undermined their own defense. They also undermined the “Truther” narrative that has plagued American politics almost since the Nine-eleven Incident.

On March 1, 2003, police in Pakistan caught him with his pants down (literally), in the company of three comely young women. Police also seized a laptop computer with a file (in clear text!) containing many passwords that he regularly used. The Pakistanis turned him over to the Americans. They brought him to Guantanamo Bay. There the Central Intelligence Agency interrogated him, with “enhanced” or “harsh” methods. “Waterboarding” (pouring water onto a cloth held over the prisoner’s mouth and nose) was one part of a routine that finally broke him. After that, he sang whole arias. Placido Domingo should envy him.

The military held a first terrorism trial, but stopped it. Khalid Sheikh Mohammed admitted everything. He even said that he wanted to die, as a “martyr” to Islam.

Then Barack H. Obama took office as President. He appointed Eric Holder, one who once defended suspects at other terrorism trials, as his Attorney General. Holder sought to try Khalid Sheikh Mohammed in the New York City District Court in Manhattan. Local residents, and relatives of the 3,000 people who died at the World Trade Center, expressed outrage. So now the military must try him again, along with four other men who the government says were his accomplices.

The New York Post and The Los Angeles Times both describe what those defendants did. They refused to enter a plea when the judge asked them to. They pulled the headphones out of their ears so that they would not hear the simultaneous translation of the proceeding. They spread prayer mats on the courtroom floor and knelt to pray. One suspect raised his thumb and smiled at two victim’s family members who watched behind a window. (Thumbs up, in Arabic culture, is not a gesture to encourage. It is the kind of insult an American or European gives when he raises his middle finger, or thrusts his fist straight into the air.) Another defendant took a copy of the pleadings, folded it into a paper airplane, and mounted this on a microphone.

That defendant’s woman lawyer did him one better. She dressed in full Muslim hijab for the terrorism trial. The sketch that CNAV has seen shows a woman wearing a full scarf that covers all but the front of the face. (It is not the Afghan burqa that leaves the wearer only a fine mesh to breathe through.) She then audaciously said that all women at the terrorism trial, or any phase of it, should wear hijab to avoid offending her client!

But those five men are not acting like the victims of classic torture. A CIA agent recently told Lesley Stahl, on CBS’ Sixty Minutes, that Khalid Sheikh Mohammed did not seem to care whether he lived or died. He would even count on his fingers during a “waterboard” session. He knew that the men interrogating him would not pour the water on for longer than ten seconds at a time. (Watch the two CBS News videos, in which Jose Rodriguez describes exactly what he and his colleagues did.)

If anything, those five men are more defiant than ever. If you break a person through torture, you don’t expect him to “give you the finger” (or the thumb, as an Arab will do). You expect him to sit quietly or, at worse, mumble to himself. By giving the victims’ families the thumb, making paper airplanes, and throwing their Islamism in the court’s face, they undermine their own defense.

But the mainstream media has missed something else: the “Truther” narrative. A “Truther” is anyone who says that the Nine-eleven incident was an inside job. The basic “Truther” theory says that President George W. Bush sought an excuse to go to war to help his friends in the oil and defense industries profit. (That’s similar to the reason that Romans went to war in Julius Caesar’s day: they had turned war into a highly profitable business.)

Another “Truther” version says that a cabal of international bankers have wanted all along to scare humanity into embracing a one-world government. The World Trade Center would always be the linchpin of that plan. Ostensibly the World Trade Center would bring businesses together from around the world, into one place. That is exactly what the World Trade Center did do, for decades since its twin towers first eclipsed the Empire State Building as New York’s tallest. But, should the Bankster Cabal feel the need, they could always stage a dreadful act of sabotage and mass murder, by demolishing the World Trade Center in a way that would look like a bombing or an airstrike. To that end, so the theory goes, the original contractors put demolition charges throughout all the buildings, so that someone could collapse the buildings by remote control and stage any scenario they wanted. In 2001, they had the perfect scapegoats: Islamic terrorists. So these shadowy plotters:

The plane that struck the Pentagon happened to strike at its reinforced wall. The target of the fourth plane might have been the Capitol. We’ll never know, because a group of passengers, with Todd Beamer (“Let’s roll!”) in the lead, took matters into their own hands and forced the fourth team to crash their plane well short of Washington.

The “Truther” narrative relies most heavily on the fall of Building Seven. No planes hit it. Yet it fell down abruptly hours after the towers did. “Truthers” insist that someone blew it up to stop the New York Fire Department from finding the demolition charges it carried. They also insist that Mayor Rudy Giuliani commanded New York’s first response from a spot away from Lower Manhattan, this although the primary first-response headquarters was in Building Seven.

What has this to do with the terrorism trial? Consider this: Khalid Sheikh Mohammed broke every rule of tradecraft. He kept a laptop computer with passwords in clear text. In this era of rampant identity theft, no civilian does that. Or he shouldn’t, anyway. This reporter keeps different passwords for different merchants in a file that only a special password management program can open. Furthermore, each password holds up to fifteen letters and numbers that the program selects at random, or thirteen characters that include punctuation marks. Why Khalid Sheikh Mohammed did not protect his passwords the same way, CNAV will not speculate.

See! KSM left his passwords hanging out! And you say he planned the most brilliant high-precision flight operation in the history of warfare? Give us a break!

But why, then, did not Khalid Sheikh Mohammed stand at this phase of the terrorism trial, look the judge squarely in the eye, and say,

Your honor, I am innocent of all the charges that your government imputes to me. I am a witness to the grandest conspiracy of which Western man ever conceived. I did not kill three thousand people that day. Your bosses did. Theirs is the guilt you should judge! They have the blood on their hands! To the families of those who died, I urge you: look to your corrupt officials who lied you into a dreadful war, and your cowardly legislators who refuse to investigate! Blame them for your losses, not me, and not Allah, who seeks only peace!

A “Truther” says that all the time. But Khalid Sheikh Mohammed said nothing at his terrorism trial, except his usual five-times-daily prayers in Arabic. One of his friends held up his thumb, not to say,

but instead to say,

Another terrorism trial co-defendant folded a page of the pleadings into a paper airplane, an obvious symbol of the Nine-eleven airstrike. He was saying,

Yes, I did it, and I would do it again! God is great! Take that!

Well, take this, “Truthers.” This terrorism trial has demolished your narrative. You can allege nothing further in mitigation.

CNAV urges Ron Paul, M.D., and his followers to learn something from this terrorism trial, as they prepare what could still be the grandest upset in the history of the American two-party system. Ron Paul was a “Truther” once. He isn’t any longer, but he still blames US foreign policy for the Nine-eleven Incident. He should ask himself whether obscene gestures and paper airplanes fit his narrative any more easily than it fits a “Truther” narrative.

The idiocy of “Truthers” has always baffled me, especially the ones who say the towers were brought down by controlled demolitions. That would have required hundreds – probably thousands – of pounds of explosive connected by miles of det cord and firing cable. I think the people who worked in the WTC might have noticed something during the couple of weeks it took to wire the buildings for demolition.

There are multiple angles to the “truther” campaign. What you describe is one of them. Another is that they were indeed Muslim terrorists, and the Bush administration helped them (or simply allowed them) to carry out their attacks.

Also, WTC Building 7 fell down hours after the main towers, not days (if I remember correctly it was at around 5pm). You may want to fact check some of your other statements as well.

Note: I do not believe in any of this “truther” nonsense.

The only reason there is a trial at all is that “we don’t execute prisoners”. Remember all the crap we gave the Russians years ago for Kangaroo Court trials? The end result will be the same….except we won’t kill them. We’ll keep them in jail and endure their stupidity for several years until they die of natural causes. Better to take them to the beach at low tide, stick a piece of bacon over the barrel of the gun, shoot ’em and let the tide take ’em out to shark city.

I have only one quarrel with your proposal, Tonto: you lose intelligence that way. By capturing and interrogating KSM, even harshly and with “enhanced” technique, the USA learned enough to roll up a lot of terrorist networks. That’s what I meant by “he sang whole arias; Placido Domingo would be envious.” Dead men sing no songs.

So we should treat prisoners the same as the Taliban? Never forget that we’re the good guys. Its often more difficult to do the right thing but thats what separates America from our enemies. If we start acting like the people who we are against than what is it that we are really fighting for?

If I really wanted to treat prisoners as the Taliban treats them, then I assure you,Mr. M, you. Do. Not. Want. To. Know.

The whole “Truther” thing is even less plausible than the “Birther” thing, and that’s saying something. What’s weird is that truthers come from all over the political spectrum. I follow a web comic called “The Far Left Side”, and the guy who writes it is a serious truther. Such a shame – his comics are pretty good.

His interesting-if-misguided series of ‘toons on the truther nonsense starts here. It’s an island of insanity in an otherwise very good strip.