We hear much about our national debt in the news. Who really wants to listen to that stuff? Our favorite sitcom is coming on the tube. Yes, we’ve heard how bad things are. But we don’t see the bread lines (or the “migrant mothers”) we associate with the Great Depression. So things can’t really be that bad. Of course Lyndon Johnson replaced the bread lines with food stamps and government programs. But no one is starving. Hey, this is America. Things like that just don’t happen here anymore. Our government protects us from stuff like that.

A debt bigger than we imagine

Sure, we hear the numbers in the news. But we never learned to count up to a trillion in school. So we know the number is big, but it doesn’t really mean much to us. The debt might be rising, but so far we have been able to keep kicking the can down the road. We hear that somebody someday in the future will somehow have to pay. But we don’t know that somebody, someday isn’t now, and we’re sure that the somehow will someway work itself out. If not, we can always just print or borrow more money. Credit cards taught us how to rob Peter to pay Paul and get by. Past generations didn’t have it so good. They had to save their pennies until they could afford that new car or the new set of golf clubs. But today we just say “charge it” and we get what we want when we want it. 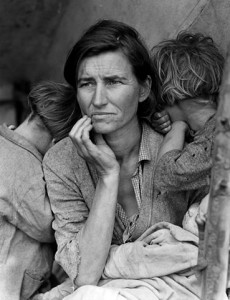 Florence Thompson with some of her seven children. She probably lost her farm in the Dust Bowl. Photo: Dorothea Lange/Farm Security Administration, 1936.

Sometimes we may feel bad about the debt we are placing on future generations. But they don’t seem overly concerned, so why should we? Okay, so back in February 2011, a few students demonstrated in Washington Square Park, NY protesting their student debt. But it’s hard to take that seriously when they are the ones that incurred that debt under their own free will. And after all, everyone knows that if you get a college education you are just about guaranteed a high-paying job. They may be in debt to the tune of nearly $100,000 now, but of course they will be able to kick that can down the road too. Besides, the man now occupying the White House just made it easier for them to borrow money so that they can go to college and become whatever they want to be. And if that doesn’t work out, they can always move back home and live with Mommy and Daddy.

The CBO has tried to depress us by saying that children born in 2010 are starting life with public debt equaling $29,178. By the time they’re 10 (at today’s rates) that will climb to $49,694. By their 18th birthday, $80,650. If they go to college, their national debt burden will grow to $103,826. Of course if they go to college, you can add at least another $100,000 plus in student debt to that number. That’s a shame, but my kids are all grown and I probably won’t be around by then. Besides, this is America. Our politicians will somehow solve the problem by then. It doesn’t matter that they’re the ones that created the problem. They assure us that if we choose their Party everything will be fine, and we can keep kicking the can down the road indefinitely. After all – it’s only a number.

Of course there is another game we can play instead. It’s called kick the bums out of our House (and Senate). But that would mean actually paying attention to what’s going on. Worse – we might have to miss our favorite reality show and go to the polls and vote. For now we can just kick the can farther down the road, because the talking head on my television screen tells me that the next person in the White House will solve all our problems.

I’m all for a reboot of Congress with some fresh bodies more interested in serving the public and producing serious options to address serious problems.

As for the two men running for the presidency, you can hate Obama all you want but at least he’s put out plans for people to critique. Romney’s just making pandering promises without any details for how he’d deliver on them, and his proposals for the budget and the deficit are laughably unrealistic.

Here are some points from an analysis of Romney’s proposals – at least the ones he’s willing to share so far – done by the non-partisan Tax Policy Center:

“The Tax Policy Center found that Romney’s across-the-board 20% reduction in tax rates (plus other changes) would give the richest one-thousandth of us a tax cut of $725,000 every year while asking families earning under $30,000 to pay a little more. Folks in the middle would get $810 a year. And that’s assuming we all get to keep the benefits of the Bush tax cuts.

Here’s the biggest unknown of Romney’s plan, and the one it really hinges on: He’s going to close some tax loopholes — also known as tax expenditures — in order to bring in some more revenue. He calls it “broadening the tax base.” It’s a fantastic idea. Read my previous column about welfare for the wealthy.

If you take all those items off the table, there’s not much money left.

Because Romney won’t say which specific tax expenditures he’d target, we can’t say for sure how much total revenue would be raised. What we do know is that the nonpartisan Congressional Research Service has concluded that “it may prove difficult to gain more than $100 billion to $150 billion [a year] in additional tax revenues through base broadening.”

By this analysis, Romney’s budget would be hundreds of billions of dollars in the red, even after cutting a big chunk out of government spending.

Realistically, the choice in November is going to be between Obama and Romney barring something completely unforseeable. I’d rather bank on someone who’s taken pragmatic steps to address the economic meltdown that was handed to him instead of a tight-lipped, pandering weathervane with no core and no plan, whose only options shared to date would make things worse. “Trust me, and I’ll tell you how I’ll do it after you elect me” isn’t going to fly.

MarketWatch misses the same point that all Progressives miss: namely that when you lessen a tax and rule-making burden, and let people know that those burdens will not return, the economy grows. When the economy grows, that does two things: it makes the entitlement programs less expensive (because fewer are eligible or want to bother with it), and it brings in more revenue.