Last Friday, our putative President, Barack H. Obama, signed yet another Executive Order, this time to let 800, 000 people stay and work in the country, and not arrest them for unlawful entry. Within hours, a US congressman said he would sue to stop this. This kind of lawsuit is long overdue. Someone needs to say whether a Presidential Executive Order, all by itself, carries the force of law.

The White House has not yet published Obama’s latest Executive Order. (It probably will, later today or tomorrow.) Fox News Channel tells what it will say. According to it, the immigration service will not deport as many as 800,000 illegal aliens whose parents brought them over the border when they were kids. (Not, that is, if they haven’t broken any laws other than coming into this country without a visa.) What’s more, the authorities will give them slips to let them work in this country.

This is why Obama said he did this:

These are young people who study in our schools and play on our playgrounds. They are Americans in every single way but one – on paper.

The Executive Order is a quick-and-dirty plan to do what the “DREAM Act” (Development, Relief, and Education of Alien Minors) would do. And when he announced his Executive Order, Obama scolded Congress for not passing this Act earlier.

Several Members of Congress told the press how outrageous this sounds. Allen West called it “another example of executive overreach.” Peter King of upstate New York said he would check at once into whether immigration authorities would now enforce the law only selectively. Senator Marco Rubio (R-FL) suggested that Obama had poisoned the well on this issue. He has his own DREAM-like bill, but now says that Obama, with this Executive Order, has made passing such a bill much harder.

But Representative Steven King of Iowa said the one thing that someone in Congress should have said long ago: he will sue the President to stop this. 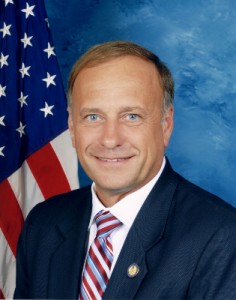 King said, also on Friday, that he would go to court to enjoin this Executive Order from taking effect. Unless and until Congress passes anything like the DREAM Act, Obama has no right to put it into effect by Executive Order. So says King. He also said he would challenge the President by himself, whether anyone else in Congress joined him or not. (See stories in WND and Newsmax.)

King’s problem with this Executive Order goes far beyond what it does. No President, nor any State Governor or other executive, has the power to do what he pleases without checking with his respective legislature. King said he would act

before Obama has a chance to do even more damage to the Constitution.

King has done this before. Then-Governor Tom Vilsack signed an Executive Order in 1999, having to do with hiring discrimination in State government offices. King sued him, and won. A judge said that Vilsack exceeded his authority with that order. King will rely on his experience in suing Obama. His lawyers are looking now into:

This is the first time in recent memory that anyone in Congress has challenged a Presidential Executive Order. Without challenges like this, Presidents have for decades seemed to make new law with them and get away with it. Now, at last, a court might decide whether a President may do that, and how far he may go.

I thought this was done through a new “Policy”. No EO.