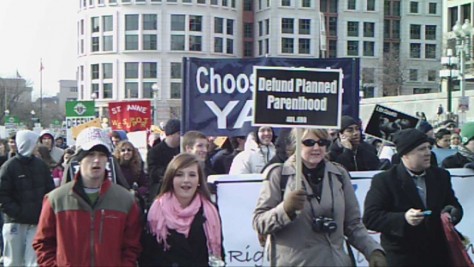 I received a call last evening from the 40 Days for Life campaign director who asked me if I was interested in participating. Now I do not judge the motives of those who do make a stand in the pro-life cause in this way. But a far deeper issue exists which we must address. As I discussed this with my wife, she rightly pointed out that it is rather hypocritical to stand out the front of an abortion clinic praying for the women who go in while the church uses birth control. Whether you kill a child at conception or weeks later, your motive is the same and the result is the same: no child. Most Christians do not realize that the pill causes an abortion, just a very early one. Other methods of preventing the seed and the egg meeting are also motivated by the same underlying issue, not wanting children.

Lo, children are an heritage of the LORD: and the fruit of the womb is his reward. As arrows are in the hand of a mighty man; so are children of the youth. Happy is the man that hath his quiver full of them: they shall not be ashamed, but they shall speak with the enemies in the gate. (Psalm 127:3-5). 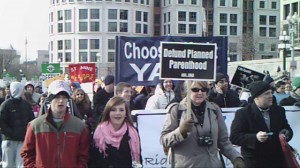 Children and adults march side-by-side in the 2011 Annual March for Life. Photo: CNAV.

We will continue to lose the Pro-Life battle until Christians learn that God loves children and so must we. It is not enough to stop abortion. We must also stop birth control. It has the very same underlying motive, it is just a matter of a time difference. 1 John 3:15 says that if we hate, we are murderers, and the opposite of love is hate. Do we love children? If we do not love them, we hate them and if we hate them we are murderers, we are no different from those who abort later in gestation, as God sees our rejection as murder.

The Lord Jesus made his view of children abundantly clear in Luke 9:36-37:

If you reject children you reject God. There are only two incidence in the gospels of the Lord Jesus becoming angry, the first when his house of prayer was made a den of thieves (John 2:15-16), and the other was when the people tried to reject children. (Mark 10:14).

Don’t be offended, I also did not always think this way. I inherited my negative view of children from my surrounding culture rather than from God’s heart and Word. 14 years ago I said I’d never have children, that was, until I searched the Scriptures to learn God’s heart for children. When my wife and I finally yielded our will and submitted to the Lordship of Christ over our family planning (after already reluctantly having three), He tested us by sending us twins. We’re now expecting blessing number 9.

The purpose of marriage is not to have pleasure and to be idle but to procreate and bring up children, to support a household (Mal 2:15). This, of course, is a huge burden full of great cares and toils. But you have been created by God to be a husband or a wife and that you may learn to bear these troubles. Those who have no love for children are swine, stocks, and logs unworthy of being called men or women; for they despise the blessing of God, the Creator and Author of marriage.

Until the church is again full of large families, our words and prayers really mean nothing. When you walk in the park with your many children in tow, this testimony speaks far louder than praying silently outside an abortion clinic. It says you are willing to obey God, deny self and love what God loves.

The problem is that in recent decades the church has jumped on the birth control band wagon without question while its members point the finger of blame at those who abort their children later in gestation. If Christians had large families and discipled them according to the Scriptural pattern, we’d certainly outnumber those who use birth control and abortion and would by sheer numbers alone win the pro-life war! (See Ex 1:9-12). Let’s begin in the church first by repenting and then upholding the sanctity of life by returning to the Scriptures to learn what God thinks of children. Then and only then may God answer our pleading. Until then, we like they deserve judgment.

For the time is come that judgment must begin at the house of God: and if it first begin at us, what shall the end be of them that obey not the gospel of God? (1Peter 4:17.)

Related Topics:abortionbiblechildreneconomyfamilyphilosophy of abortion
Up Next

War on Women, Scripture and Science

“Most Christians do not realize that the pill causes an abortion, just a very early one.”

Claiming that the pill causes an abortion is, frankly, just a scare story. It has nothing to do with reality, and luckily most women know that.

If you read the fine print on the pill packaging or do any serious research you’ll discover that it works in three ways, firstly to prevent ovulation, secondly to prevent seed from reaching the egg and thirdly to prevent a fertalized egg from implanting in the uterus. The pill actually fails to prevent ovulation in about 27% of women, out of these, about 4% still get pregnant and the other approximately 23% of women have a spontaneous chemical abortion. The point of the article was not so much to argue about this but about the anti-children attitude prevalent even in the church. Until we address this, Christians who point the finger at the pro-lifers are mostly simply hypocritical. If we are Christians we should love what God loves and have His heart on this critical matter.

“the other approximately 23% of women have a spontaneous chemical abortion.”

Do you know how many women who don’t take the pill have spontaneous abortions anyway? Hint: it’s right around 23%.

Actually that rate is closer to 70% on a per-fertilization basis: about 30% of fertilized eggs don’t implant, about 30% implant but fail early enough that pregnancy is never suspected (ie there is no missed menstrual period), and 10% fail after that point.

I’m curious as to the source of Joseph Stephen’s claim that of the 27% of women who ovulated, 23% underwent ‘spontaneous chemical abortion’. Is that based on positive hCG testing, as implied by the term ‘chemical abortion’? It would be frankly remarkable if 100% of those who ovulated had positive hCG findings since among fertile women not on contraceptives the per-cycle rate of pregnancy hovers around 30% under optimum circumstances, not 100%. That would imply that oral contraceptives actually improve the odds of fertilization and implantation _among those users who ovulate_ when compared to the general population.