To Representative Christopher H. Smith (R-NJ-4): It seems unlikely that you have missed seeing the many reports about voter fraud in various swing states during this past election. If you have, by any chance, here are just a few links to some very disturbing reports.

As we all know the internet is filled with exaggerations and even flat-out fabrications and as a result much care needs to be taken when regarding or believing articles. This is especially true of allegations of voter fraud. Having said that, can there be any doubt that massive fraud and felonious activity appears to have taken place all across this country?

History of gerrymandering and arrogance 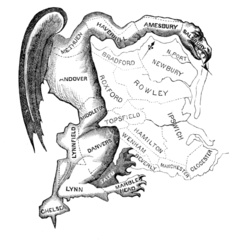 Original cartoon of “The Gerry-Mander”, this is the political cartoon that led to the coining of the term Gerrymander. The district depicted in the cartoon was created by Massachusetts legislature to favor the incumbent Democratic-Republican party candidates of Governor Elbridge Gerry over the Federalists in 1812. Credit: Elkanah Tisdale (1771-1835), The Boston Centinel (1812)

During the past 20 years I found myself unrepresented having had my town gerrymandered into [Representative Rush] Holt’s bastion of liberalism [i.e., the 12th District]. Over the years when Holt was not ignoring me he was telling me to “shut up and sit down.”

Now that this latest round of redistricting has further encroached upon the Constitution by reinforcing the reality that my old district and my new one will have representatives unanswerable to the people, you are now my Representative and it appears, by way of party affiliation, we are ideologically aligned. But are we?

Having received many “form letter” responses from Rush Holt which clearly indicated he had no intention of even reading of my concerns nor doing anything about them, I now wonder if my new Congressman will represent me differently.

In that vein I wish to pose these several questions to you:

All of us know that the US Justice Department is corrupt and not much more than a branch of the Obama political machine and will never lift a finger to protect the integrity of our Constitution or our political process.

There is only one organization of power an authority that can initiate an investigation and work towards proving, one way or another that this election was not stolen. That organization, is the House of Representatives.

A time for courage

Republicans and conservatives have long witnessed spineless representation from those in our leadership. Many, many of us have just about had it. That means there may be a massive exodus from Republican registration if we feel we need to go elsewhere to find the leadership courage required to save our Republic.

The clock is ticking and it does not bode well for either our party or our country. Congress has the power to pass a resolution asking every state Attorney General in states where these outrageous vote percentages have been reported, to refuse certification until a full accounting has been done.

This process may well cause contention, a word our Republican Party has always feared, but that fear of contentiousness should be overwhelmed by the fear of losing our Republic.

Without fair elections, the future is lost. Will you be part of history that allowed that, or will you be the courageous leader who steps up and does what’s right?

Thanks and I await your response.

America: they want it? Let them own it